This tutorial explains async while loop Nodejs without assuming you understand the concepts of promises, looping, and timers.

It is divided into four sections: how JavaScript reads your code, the concept of promises, loops, and the need for asynchronous code in while loops and implementing async while loop Nodejs step-by-step.

Section-1: How does the JavaScript engine read your code?

JavaScript engines read your code from top to bottom. If a code portion takes longer to execute, the subsequent code portions will wait longer to run. That behavior is called synchronous.

However, with the help of callback functions, timer APIs, and promises, you can make JavaScript code run asynchronously. Here is an example.

Assume you have two calculations.

When you run the code, the terminal prints 5 followed by 8. What if you want to see 8 before 5? You can control the output with the setTimeout API.

The setTimeout API receives a function as an input and runs it after the specified number of milliseconds. In the above example, we run the firstCalCulation and secondCalCulation functions which print the output of 2 + 3 and 3 + 5 after 2000 milliseconds and 1000 milliseconds, respectively.

Since JavaScript does not wait for the pending computation in the firstCalCulation function, it will run the second function when the first one has not completed running.

As it stands, the two functions run independently of each other. Nevertheless, we can make the first calculation depend on the second calculation such that you won't see the first result when the second function has not finished executing.

A delay in execution of the secondFunction will prevent the firstFunction from executing because the first function cannot run without its parameters: firstCalculation and the callback function.

A function received as a parameter to another function is called a callback function. It simply implies, "Do something and call me back when you are done."

The above code would be unmaintainable if we were to do lengthy computations that lead to the nesting of multiple callbacks. That calls for understanding the role of promises in async while loop Nodejs computations.

The most familiar way to make the synchronous JavaScript code run asynchronously is to use the Promise API.

The most straightforward interpretation of a promise in JavaScript is, "I promise to execute the given code. If the promise is resolved, use the returned data for subsequent sections of your computations. If I fail to resolve my promise, I will reject the order with an error message."

The Promise object takes a callback function with two (method) arguments: resolve() and reject(). The resolve() function runs when the expected process completes successfully, while the reject() function catches errors that may occur during the code execution.

You can then handle the output using then-catch 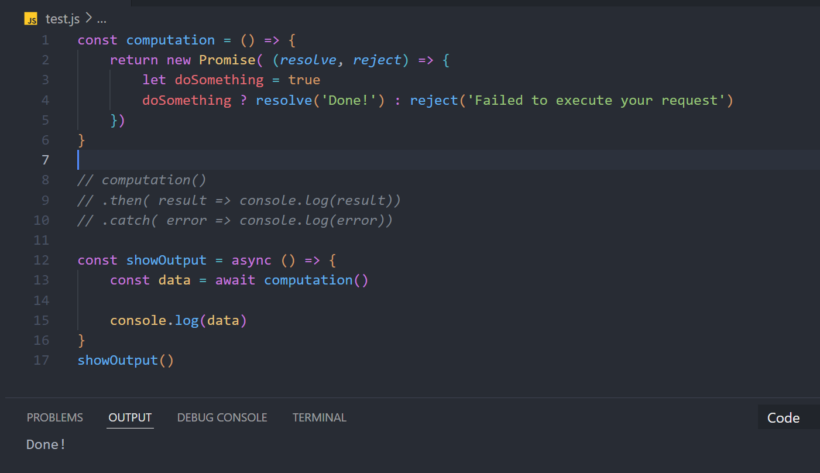 The async-await syntax is an alternative to joining multiple .then()s or Promise.all() and one catch() function.

ALSO READ: SOLVED: Check if path is subdirectory of another in Node.JS

async-await always runs in a function. Such function is said to be asynchronous, although you (as the programmer) write the code as if you are writing synchronous code.

You will not always need to create the Promise function because most Nodejs modules and APIs are built to run asynchronously.

Let's understand the concept of looping before practically implementing async while loop Nodejs.

Section-3: The role of asynchronous code in while loops

You probably wonder the reason for running code in async while loop Nodejs. There could be many reasons to attempt looping asynchronous code.

One of the key reasons is to fetch multiple resources in a controlled environment. It would be best if you familiarized yourself with loops before doing that.

A loop is a portion of code that repeats a particular code as long as a condition is true.

The three main loops in JavaScript are for, while, and do-while loops. for loops are mainly used when the number of repetitions is known.

On the other hand, while loops are mainly used when the number of repetitions is unknown at the start. For example, you could be unsure about the number of posts to have been posted when a user visits your application. 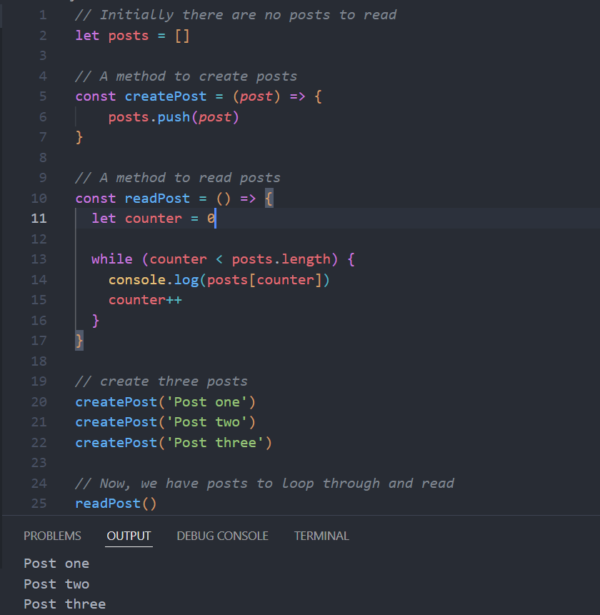 The while loop is divided into the initializer, condition, and increment.

Now that you understand asynchronous programming and while loops, let's see how to combine the two concepts.

Lab setup to practice Async while loop in Nodejs

Install the latest version of Nodejs, then head over to your terminal and create two files. 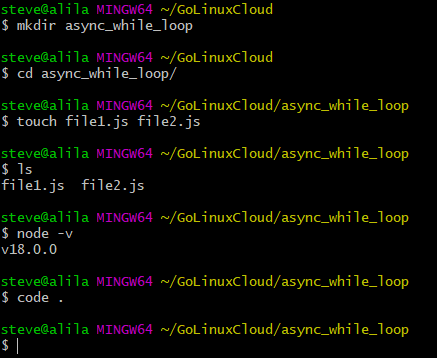 Assume you want to print 10 post IDs after the specified milliseconds. Since the execution of a setTimeout API run directly inside a loop gets deferred, we can use recursion or async while loop Nodejs as follows.

The delayExecution() function returns a promise which resolves a setTimeout after the ms seconds that the function receives whenever we loop through the 1 to 5 in the asynchronous showIDs() function. 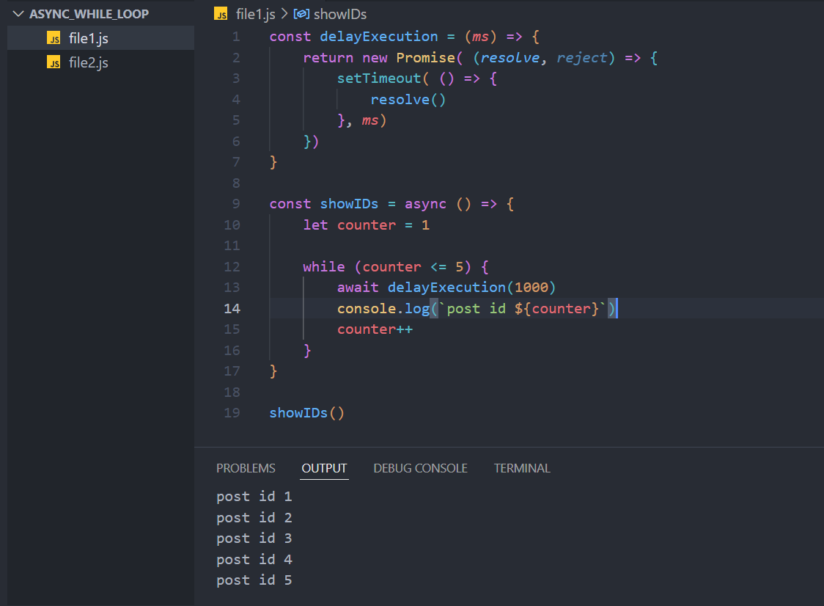 Assume you want to fetch only the first 10 post titles from the JSONPlaceholder API posts. Open file2.js and write the following code.

We get the data using the asynchronous firstTen() function by applying the Nodejs fetch API (available in Node.js version 17.5+).

We then convert the (JSON) data into (an array) objects for easier looping. Next, we print each numbered post title. Lastly, we call the firstTen() function and view the result on the console output. 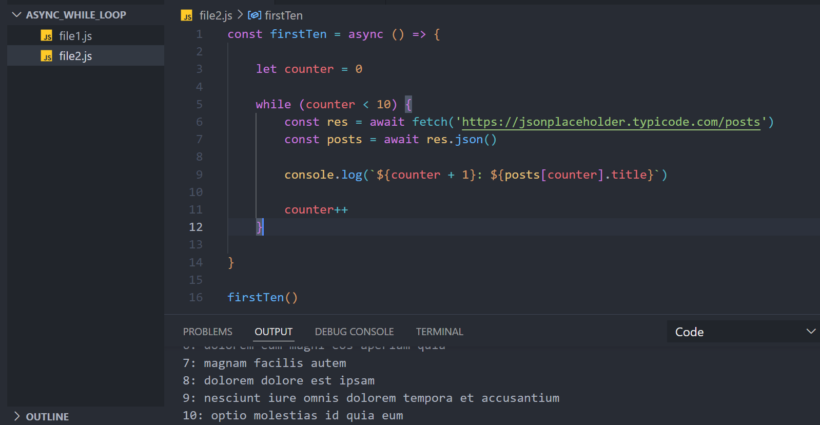 The knowledge on async while loop Nodejs helps you control when and how you receive data. As shown in this tutorial, it would be best to deeply understand asynchronous programming, loops, and the need for running asynchronous code inside while loops before using async-await with while loops.