In this tutorial, we will be working with AWS CDK in Java. Now let's head straight to the implementation part!

Working with AWS CDK in Java

First, we will log in to our AWS account and then type CloudShell under the Services tab. Note that AWS CloudShell is a browser-based shell that makes it easy to securely manage, explore, and interact with AWS resources and is pre-authenticated with our console credentials. In the terminal, we will enter the following command.

The AWS CDK Toolkit is installed with the Node Package Manager (npm). It is the primary tool for interacting with our AWS CDK app. It executes our app, interrogates the application model we defined, and produces and deploys the AWS CloudFormation templates generated by the AWS CDK.

Now we will enter the following commands to create a new directory for our CDK app and then get inside it.

Then we will enter the following command.

We will create a new AWS CDK app by invoking cdk init in an empty directory created above. cdk init uses the name of the project folder to name various elements of the project, including classes, subfolders, and files. The resulting project includes a reference to the software.amazon.awscdk Maven package which along with its dependencies are automatically installed by maven. With the above command, we have created a blank project for Java development with AWS Cloud Development Kit. 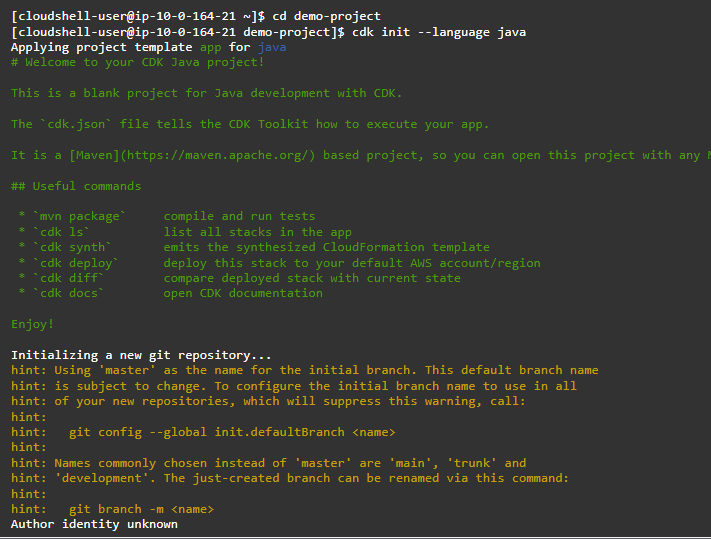 Then we will enter the following command. It lists the stacks in the app. We have done this just for verification.

Now we will have a look at the app's java files.  First, we will type the following command to get into the directory where the java files reside.

Let's have a look at the existing files in the folder with the following command.

If nano is not installed, we will enter the following command.

Now here we can see that an example resource Queue is created but the code is commented. We will uncomment it and the related import statements. 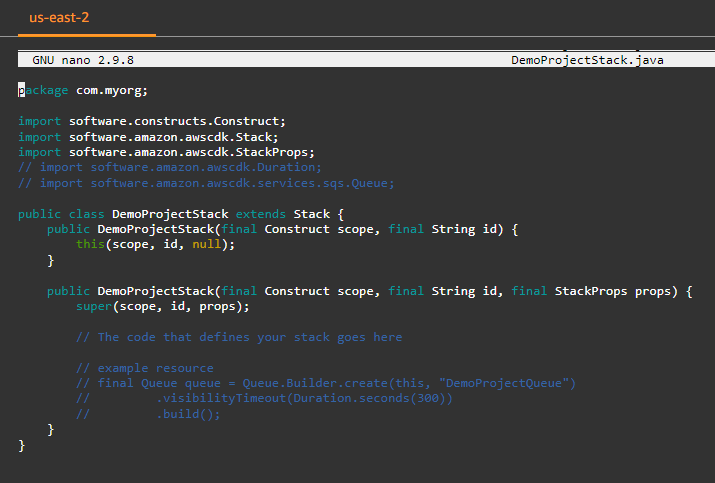 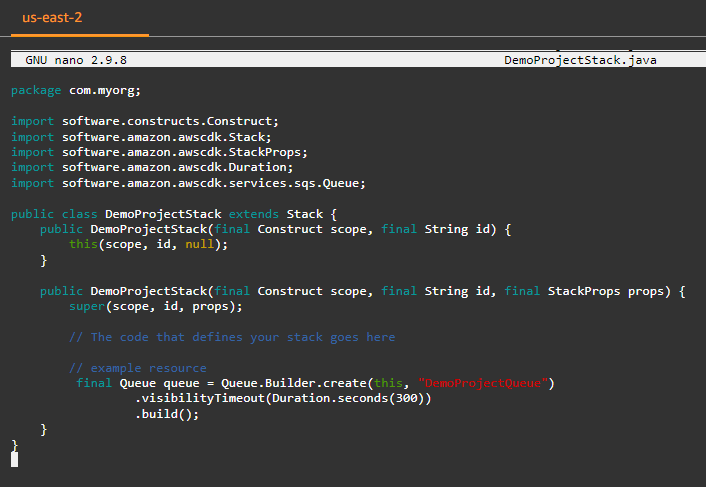 The following DemoProjectApp class instantiates a DemoProjectStack and produces the AWS CloudFormation template that the stack defined. Note that the App construct doesn't require any initialization arguments because it's the only construct that can be used as a root for the construct tree. The App instance will be used as a scope for defining a single instance of our stack. 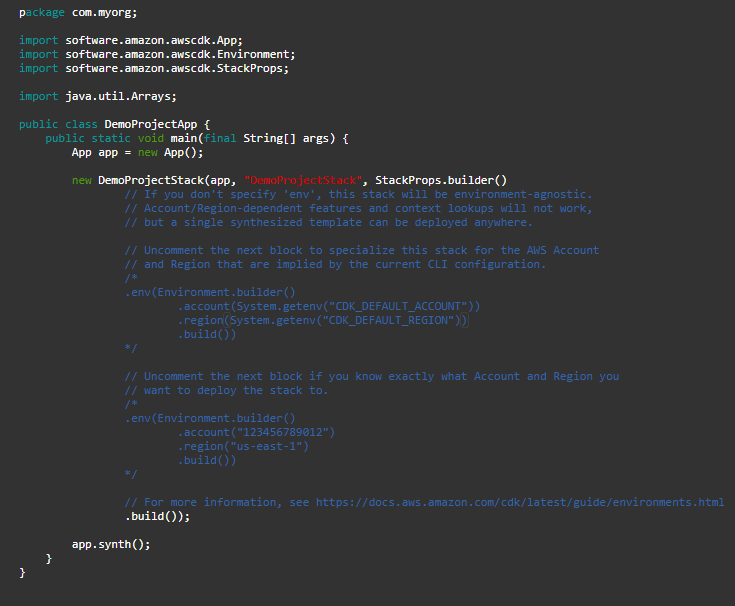 Then we will enter the following command. Note that we will have to install maven if not installed before this command.

cdk bootstrap deploys the CDK Toolkit staging stack. When we deploy AWS CDK apps into an AWS environment, it may require that we provide the resources the AWS CDK needs to perform the deployment. These resources include an Amazon S3 bucket for storing files and IAM roles that grant permissions needed to perform deployments. The process of provisioning these initial resources is called bootstrapping. The required resources are defined in an AWS CloudFormation stack, called the bootstrap stack, which is usually named CDKToolkit.

Then we will enter the following command. It synthesizes and prints the CloudFormation template for the specified stack(s). 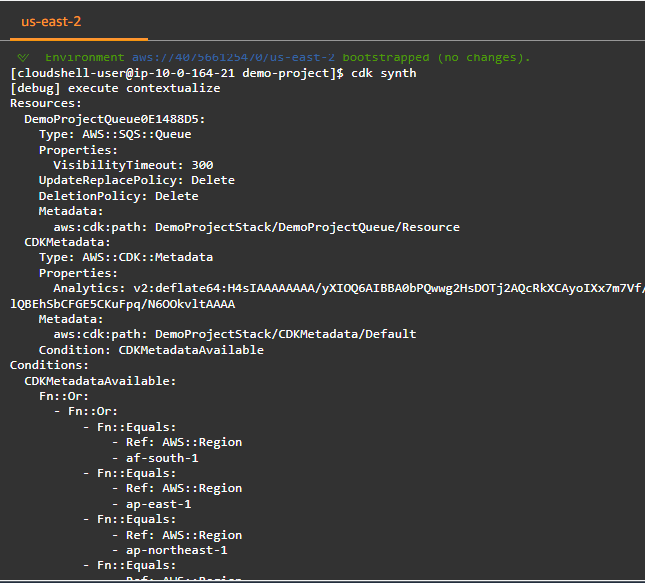 Then we will enter the following command. It deploys the resources defined by one or more of the stacks in our AWS CDK app to AWS. 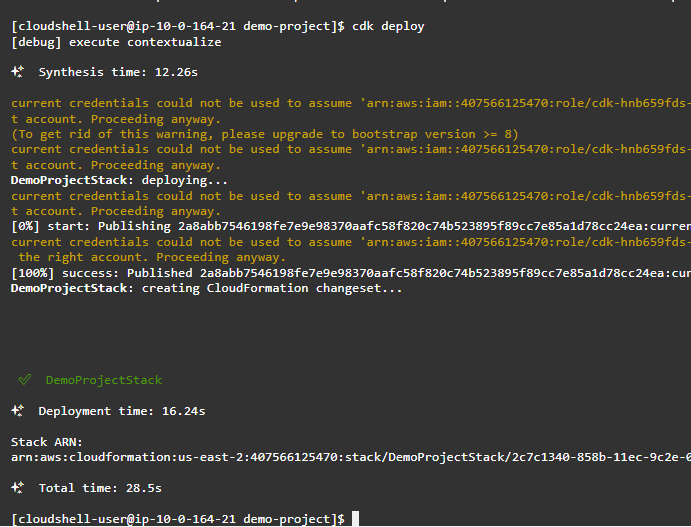 ALSO READ: Tutorial: Getting started with AWS AppSync [Hands On]

The following diagram shows the phases that the AWS CDK goes through when we call the cdk deploy.

Now let's have a look at the Stacks created as a result of the above commands. First, we will type CloudFormation under the Services tab then from the left pane we will click on Stacks. Here two Stacks are created. The first CloudFormation stack i.e. DemoProjectStack is created after cdk deploy command. The second stack i.e. CDKToolkit is created after cdk bootstrap command. We can have a look at the stack information below. 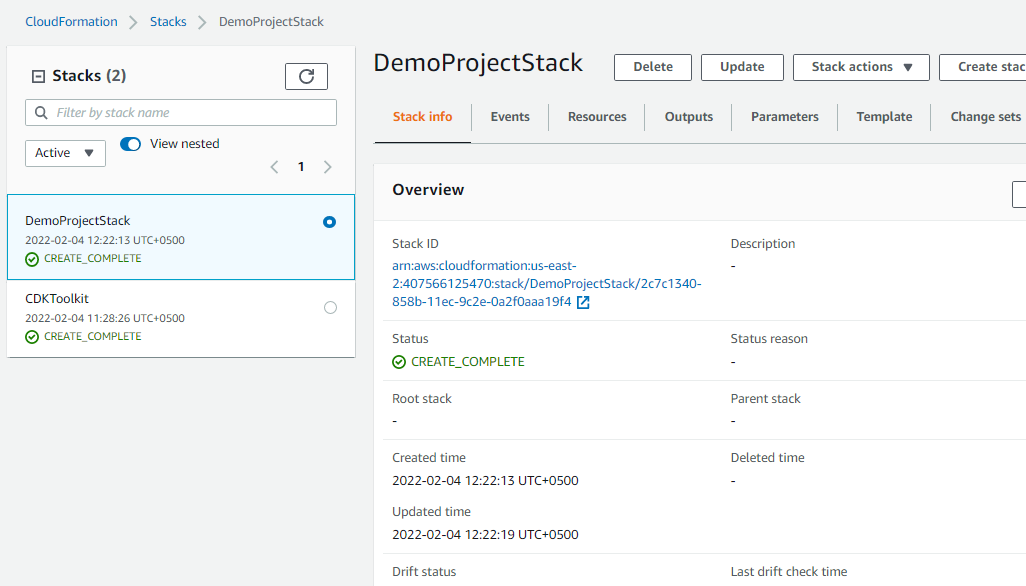 Now let's switch to the Resources tab of DemoProjectStack. We can clearly see DemoProjectQueue0E1488D5 of type AWS::SQS::Queue. This resource was created in DemoAppStack.java. 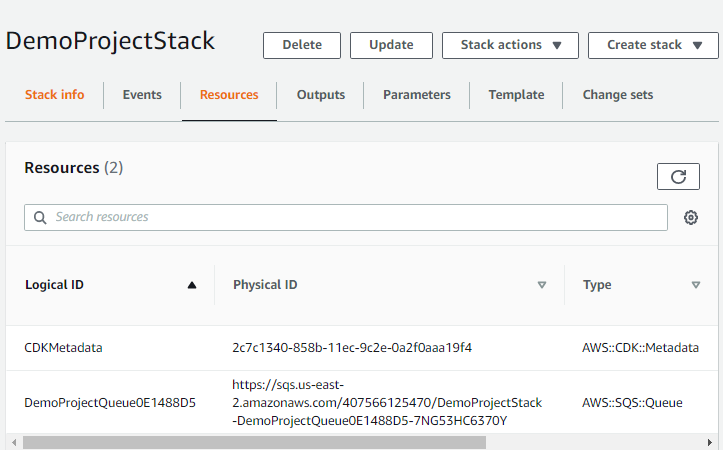 In the Events tab, we can see the events that occurred while creating DemoProjectStack. 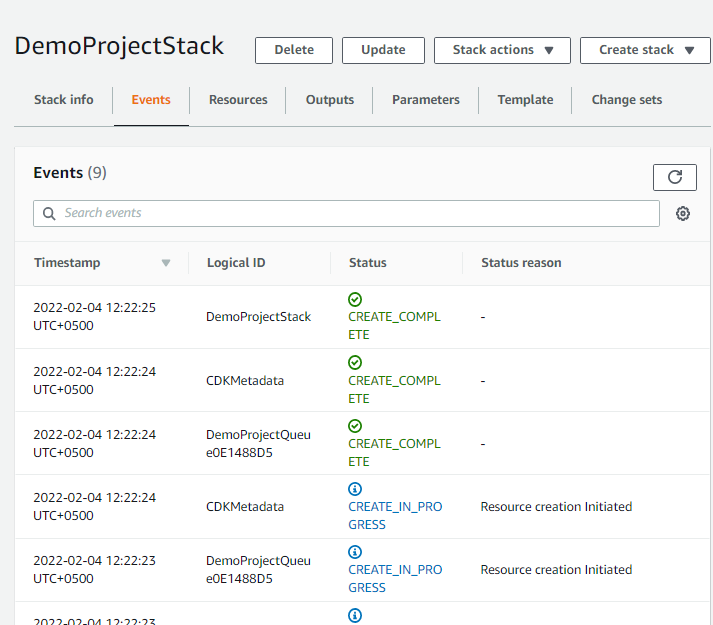 Now let's have a look at the Queue that was created. For that, we will type Simple Queue Service under the Services tab. Here we can see our newly created queue.

And in the end, we can destroy our CDK app resources by entering the following command.

Stay tuned for some more informative tutorials coming ahead. Feel free to leave any feedback in the comments section.