What is Banner Grabbing

While doing reconnaissance on a target, we may use some of the information regarding our target which is readily available. In banner grabbing, penetration testers will look for banner information displayed while interacting with the target. Information contained in these banners may be of great use to the penetration testers while launching attacks on the target. Some of the information we can find out through banner grabbing include; the name of the software being used, the version of the software, and even the operating system that is used by the target.

In the passive method, the penetration tester does not interact with the target server. A third party software is deployed hence the pentester is not connected directly to the target. Penetration testers will use this software to analyze the packets received from the target server to get the information relating to the server. Intrusion detection systems hardly detect passive banner grabbing. There are also websites that can be used in passive banner grabbing such as Shodan.

In this guide, I will guide you on how to use various tools to perform banner grabbing on a Metasploitable server.

Various techniques can be employed while using Nmap for banner grabbing. These techniques are used depending on the type of information the penetration tester intends to obtain from the scan. We will use various methods to collect information related to our target metasploitable server.

To acquire information relating to a server on Nmap, we will scan a specific port running a service on the target server. We can include various flags to obtain detailed information.

Nmap has a script “banner” to help a user while performing banner grabbing.  In our case, we want to obtain information relating to services running on port 22 of our target server. To use the script we will add -script=banner on our command as shown below.

In advanced scanning, we can add more flags to help gather even more information relating to the target server. We can add an -sV flag to help us determine the software version that is being run as shown in the image below.

We can also increase or decrease the number of probes to use when detecting the software version by changing the intensity level of the scan with the argument, --version-intensity [0-9], just after -sV flag. This Nmap option is incredibly effective against services running on non default ports due to changes in the configuration.

Nmap also allows us to scan for common ports by default. To use these options we just need to run a scan without specifying the target port. This will scan and return all the information related to the ports found as shown in the image below. 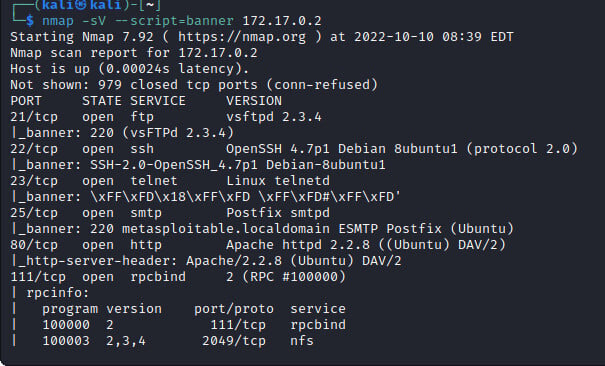 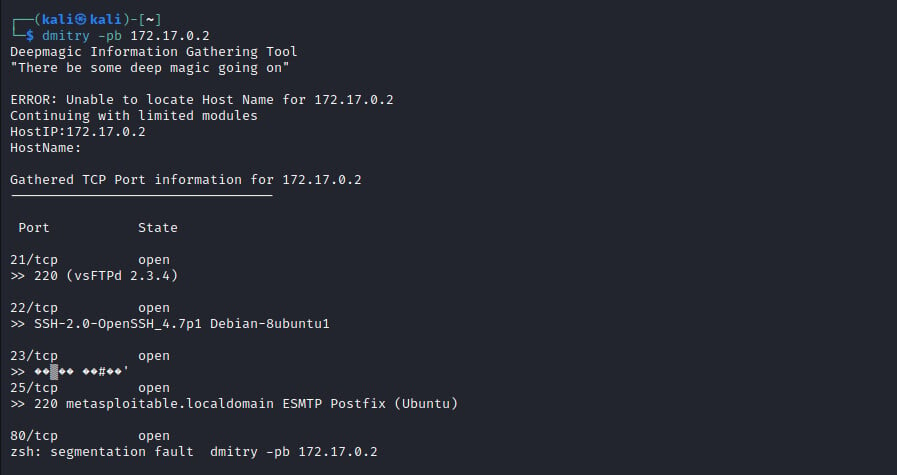 This is a network utility tool that can be used by penetration testers to grab an FTP banner for our target. To get the banner information on Netcat we simply run the command

Since we are using netcat for the FTP banner, we will use the FTP port which is 21 as shown in the image below.

As you can see in the image above, our target is using version 2.3.4.

Nikto is another tool that can be used for banner grabbing. It is an open source web application scanner. To capture details about the installed web server version, and configuration files among other useful information. To grab banners related to a target web server, we will run the below command.

Wget is a command-line utility for downloading files from the web. The tool can be used to get banners from a target server. To use wget we will run the command shown below.

-q suppresses normal output while -S flag will show the headers that have been sent by the target.

This is a command line interphase tool that a user can use to transfer data, using the libcurl library, from a remote server without the need for user interaction. cURL also can retrieve banner details of HTTP servers. To use it for banner grabbing, we simply run the command

In the above command, we have added 2 flags to ensure the effectiveness of cURL while fetching banner information. -s is used to suppress error messages being displayed and -I is to print the header information we are fetching.