In this tutorial we will explore cat command used in Linux and Unix nodes. Now the seasoned Linux Administrator would already be familiar with this command but I hope to add some more command example usage which may be new to even an expert one. But mostly this article is for new comers and beginners to Linux and Unix platform.

Overview on cat command in Linux/Unix

Now most of us would be familiar with cat command as it's usage to view the contents of the file. But I normally don't prefer cat command for that purpose as it is actually meant to be used to concatenate files and print on the standard output.

The general syntax to use cat command in Linux and Unix is:

We will explore the different usage of this command with different examples to help you understand.

This is the most basic usage of cat command wherein you can print the content of any file on STDOUT console without using any extra arguments:

I am giving this example as we are learning the various possible usage of cat command. But to be honest I never used it to create files but yes you can use it to "create files".

The syntax would be:

where you can replace FILENAME with the name of the file which you want to create. This will open the console editor where you can write your data into the file and once you are done, to save press ctrl+d

You can provide multiple file names with their path to print the content of all the respective files at once. Here I am creating two new files with some content and then using cat command to print the output from both the files.

Now let us use cat command to concatenate the content from two files into another third file:

We could have also used to append the content into any existing file. So I will re-write the content from file1 and file2 into file3 but this time I will append the data using >>:

Similarly you can concatenate multiple files.

4. Redirect output from a file as standard input for another file

The - tells cat command to read from the standard input so if we have a requirement to pass a content from one file as an input to another file then we can use following syntax:

And I have another shell script which expects input from this input_file:

So we can use them in this format:

The downside of this method is that the console will wait at the end of input_file waiting for user interaction.

We could also use different approach here using loops with cat, such as:

Using pipe also we can transfer the output from one command to another which further we utilised using while loop. Additionally we could have also used xargs:

Now this is something which we mostly use in the production environments. Assuming we want to work on the contents of a file to make some modification then we can use for loop or while loop to iterate through each line of a file and then perform the action.

Here I have a script which iterates through each line of /etc/passwd and collects the username and UID: 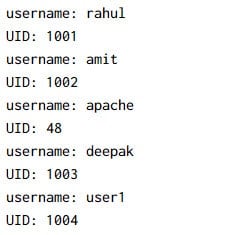 6. Detect trailing whitespace at the end of line in a file

We can also use cat command to detect or find the lines of a file which has trailing whitespace character. I had a similar requirement one time where the script will fail to execute if it's input file had extra whitespace at the end of the line. Now this input file had 1000s if line, so it is not possible for me to check each line one by one right? So cat command to the rescue.

We can use -E or --show-ends arguments with cat command to add $ (dollar sign) at the end of the line which can show us trailing whitespace (if any). Here I have a file with following content:

Let's use cat command to find these culprit lines:

So we have those lines with trailing whitespace character.

7. Detect TAB character in a file

Similar to our last example, we can also use cat command to detect if there are any TAB character used in a file using --show-tabs or -T argument.

To grep for the lines with TAB we can grep for ^I pattern:

There are multiple ways to show line numbers for the file's content. But we will only explore cat command here, we can use --number or -n argument to print the line numbers of the file: 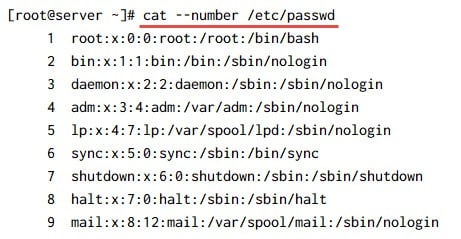 The previous example using --number or -n would display line number even if the respective line is blank with no text. If your requirement is to count the number of non-blank lines in a file then you can use cat with --number-nonblank or -b argument.

For example, here I have intentionally added a blank line in my /etc/hosts file. If I try to get the number of lines using -n or --number then it shows there are total 7 lines:

But to get the number of non-blank lines we use -b or --number-nonblank:

If your file has multiple empty/blank lines and you wish to search and replace all empty lines with single empty line then you can use -s or --squeeze-blank with cat command to suppress repeated empty output lines.

For example here I have added multiple empty lines in my /etc/hosts file:

In this article we explored different usage of cat command in Linux and Unix used by professionals with different examples. This is a very basic command but at times it can be confusing when you are working with redirection. But it can again come in very handy to get line numbers, detect TAB or trailing whitespaces etc when working with automation. But the original idea behind cat command was to concatenate which we used in Example 3 of this article.

I have used below external references for this tutorial guide