To check Openstack version or release information is not as straight forward as many other applications. Unfortunately there is no any such single command like openstack --version, to check openstack version which is running on your system.

But this does not gives any detail about the openstack release which you are using.

In the Open Source community, Openstack release is given a "unique name" rather than a version number.

But we do can check the version number of various project releases like nova, keystone etc. Using these version numbers we can determine the Openstack release and then map them to the respective Openstack series. Before the Liberty version, all projects except Swift had a version based on the year and month. Starting with Liberty, all components have a traditional version structure X.Y.Z., where X is always the same in one release.

Below table contains list of all the Openstack releases till date and their corresponding version number from individual project teams. I do not have the version information of projects older than Juno hence I have skipped them. 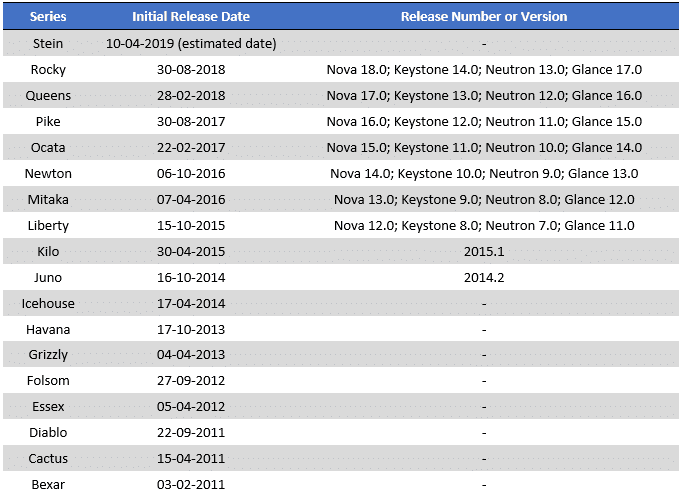 Red Hat manages its own version and support contract for every series released with Openstack. You can get the support contract and end of support life related information from Red Hat's official page, below table shows the mapping of Red Hat Openstack Platform with Open Source Openstack Series.

How to check Openstack version information?

As explained above there is no single command to check the openstack version, although you can check the version number of individual projects and then map them to the respective openstack series based on the above provided chart.

Here is an example for Mitaka release where we have the keystone and nova version number:

Here is an example from Red Hat Openstack 10 environment (Newton)

And here is an example of the old-fashion version convention from OpenStack Kilo series:

I hope the article was useful.