How to configure port forwarding in VirtualBox for NAT Networking

In Oracle VirtualBox we have two types of NAT Networking Mode.

NAT is much like a private network behind a router, the virtual machine is invisible and unreachable from the outside internet. You cannot run a server this way unless you set up port forwarding.

I will assume that you already have Oracle VirtualBox installed in your environment.

ALSO READ:
How to enable and connect virtual machine to internet connection in VMware and VirtualBox using Bridged and NAT Network

This subnet is internally defined for NAT networking Mode. You can also change this subnet to your own value
You can change the default NAT network for individual virtual machine using below command on your Windows Machine under the home directory of VirtualBox

Verify the new IP Address assigned to your interface

Revert the NAT subnet value to default in VirtualBox

HINT:
Here the guest would mean my Linux virtual machine sitting on the oracle VirtualBox while the host would be my Windows Laptop where I have installed the VirtualBox software.

For example, to set up incoming NAT connections to an ssh server in the guest, use the following command:

IMPORTANT NOTE:
The virtual machine must be in powered off state before you configure port forwarding in VirtualBox

After I navigate to VirtualBox home directory, execute below command to configure port forwarding in VirtualBox for NAT

In the above example, all TCP traffic arriving on port 2222 on any host interface will be forwarded to port 22 in the guest. The protocol name tcp is a mandatory attribute defining which protocol should be used for forwarding, udp could also be used. The name centos8 is purely descriptive and will be auto-generated if omitted. The number after --natpf denotes the network card, as with other VBoxManage commands.

To remove this forwarding rule, use the following command:

If for some reason the guest uses a static assigned IP address not leased from the built-in DHCP server, it is required to specify the guest IP when registering the forwarding rule, as follows:

This example is identical to the previous one, except that the NAT engine is being told that the guest can be found at the 10.0.2.19 address.

This example forwards all TCP traffic arriving on the localhost interface at 127.0.0.1 through port 2222 to port 22 in the guest.

To create a NAT network first navigate to the VirtualBox's home directory:

Here, natnet1 is the name of the internal network to be used and 192.168.15.0/24 is the network address and mask of the NAT service interface. By default in this static configuration the gateway will be assigned the address 192.168.15.1, the address following the interface address, though this is subject to change.

To attach a DHCP server to the internal network, modify the example command as follows:

To add a DHCP server to an existing network, use the following command:

To disable the DHCP server, use the following command:

To start the NAT service, use the following command:

If the network has a DHCP server attached then it will start together with the NAT network service.

To stop the NAT network service, together with any DHCP server:

To delete the NAT network service:

This command does not remove the DHCP server if one is enabled on the internal network.

ALSO READ: How to setup http/https proxy with special characters in password

To delete the rule, use the following command:

You also an option to select NAT Network as a Network Mode in Oracle VirtualBox. But before we select Nat Network, we must have a network in place using which our virtual machine will get the DHCP leased IP.

To create a network for NAT Network 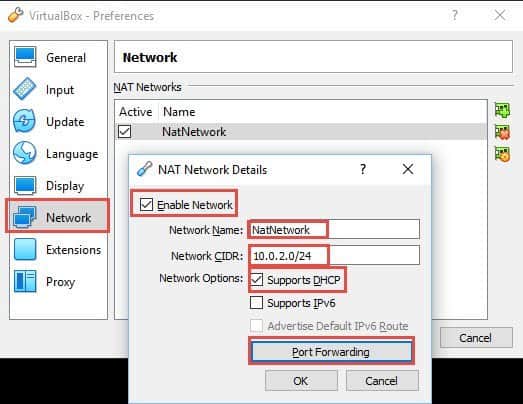 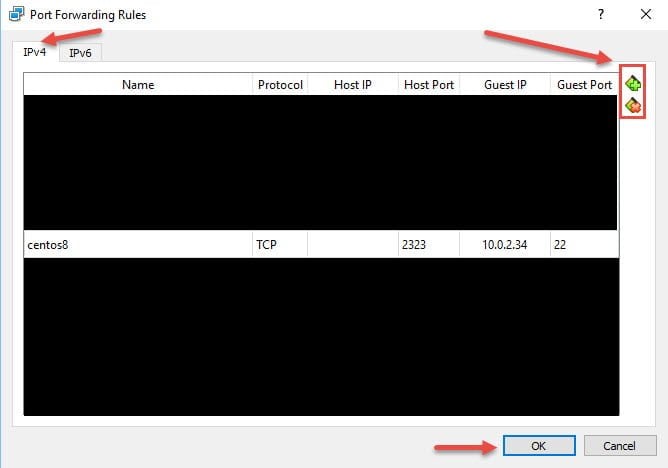 Lastly I hope the steps from the article to configure port forwarding in VirtualBox for NAT Networking was helpful. So, let me know your suggestions and feedback using the comment section.