In this article I will share the steps to configure software raid i.e. linear raid which is pretty much similar to RAID 0 with little difference which we will go through in the below chapters. I have written another article with comparison and difference between various RAID types using figures including pros and cons of individual RAID types so that you can make an informed decision before choosing a RAID type for your system.

If you run multiple disks in a non-redundant configuration, and you want to be able to recover something when any of the disks fails, then, at the very least, you need to ensure that your data is not striped over all devices. When using a striped layout, parts of most files will end up on all disks, which means that when you lose any disk, you've irrevokably lost parts of nearly every file, not to mention parts of the file-system structures themselves. This means, as you seem to already surmise, that you need to use linear allocation, which essentially appends the constituent devices' extents together, and gives you some chance of recovering files that exist entirely on the surviving device(s) after a device failure. 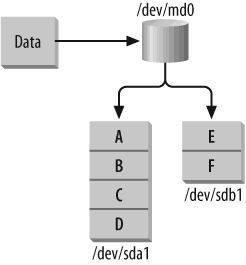 NOTE:
Each array can contain a maximum of MD_SB_DISK, as defined by the kernel. By default, that maximum is 27, but since arrays can also act as member disks, this limit is avoidable. In addition, a maximum of 256 software RAID devices are available for use.

Linear RAID requires a minimum of two disks, but does not require that member disks be the same size or type. Since the system writes to each disk until it is full, the speed and size of individual disks is largely irrelevant, in terms of aggregate RAID performance.

What is Chunk Size in Linear RAID?

chunk-size would normally define the number of kilobytes to write to each member disk for arrays that support disk striping. However, when working with linear raid arrays, the chunk-size defines the rounding factor. Each component disk is sized so that it is a multiple of the rounding factor. Because of the way the RAID superblock is placed on each array member, rounding factors of less than 64 KB are effectively equal to 64 KB.

Currently I have added two virtual disks (/dev/sdb and /dev/sdc) to my virtual machine for the demonstration of this article. There are no partitions available on these disks which we will create in the upcoming chapters.

Here are some points to remember when you are partitioning.

Advertisement
ALSO READ: Tutorial: What is GlusterFS shared storage and types of volumes

You don’t need to partition disks before using them in an array, but partitioning does provide a couple of advantages.

WARNING:
If you have a lot of disks, then you might not want to go through the trouble of partitioning each disk since this process can take a lot of time if you have more than a few drives. In that case, you can simply use a whole, unpartitioned disk as an array member (/dev/sda, for example). This means that you won’t be able to autostart arrays, however, so you’ll have to include commands to start md devices in your system initialization scripts.

Next we will repeat the same steps for /dev/sdc

Update the partition table in the kernel.

Now list the available partitions on your node and verify the changes. So now we have two new partitions /dev/sdb1 and /dev/sdc1 for setting up linear mode software raid.

Next, create a file-system on the new software raid array. We will create ext4 filesystem on our linear raid array

Create a mount point for accessing the software raid array

Next mount the raid array on the created directory

Next add an entry for the array to /etc/fstab file so it will be mounted automatically when the system restarts.

Advertisement
WARNING:
Be warned that some distributions (Red Hat, for one) halt system initialization if an /etc/fstab entry could not be properly checked and mounted. So if the kernel doesn’t automatically start your array, an entry in /etc/fstab might be preventing the system from booting successfully. It’s a good idea to place commands that will manually start arrays in your initialization scripts before filesystems are checked and mounted, even if you’re already successfully using autodetection. This will provide additional stability and, at worst, display some innocuous warnings on the console.

ALSO READ: How to install multi node openstack on virtualbox with packstack on CentOS 7

Lastly I hope the steps from the article to configure Software RAID using Linear RAID on Linux was helpful. So, let me know your suggestions and feedback using the comment section.