Virtual Router Redundancy Protocol (VRRP) is an open standard protocol, which has been developed by IEEE (Institute of Electrical and Electronics Engineers).  It provides redundancy in a network and eliminates the single point of failure. The protocol groups several nodes into a virtual node, delivering high availability to the network.

When VRRP starts, an election process happens in which one of the nodes becomes “Master” node, while the others become Backup nodes. The Master node owns the virtual IP address and is the active default gateway. There can only be one Master in the network, whereas the number of the Backup nodes can vary.

In the case where the Master node fails, a new election process begins and one of the Backup nodes configured with the highest priority becomes the new Master node. Since the priority field is one byte, the value varies from 0 to 254. The priority value zero (0) has special meaning indicating that the current Master has stopped participating in VRRP. The priorities from 1 to 254 are the acceptable values to use in the configuration.

A virtual router must use 00-00-5E-00-01-XX as its Media Access Control (MAC) address. The last byte of the address (XX) is the Virtual Router Identifier (VRID), which is different for each virtual router in the network. 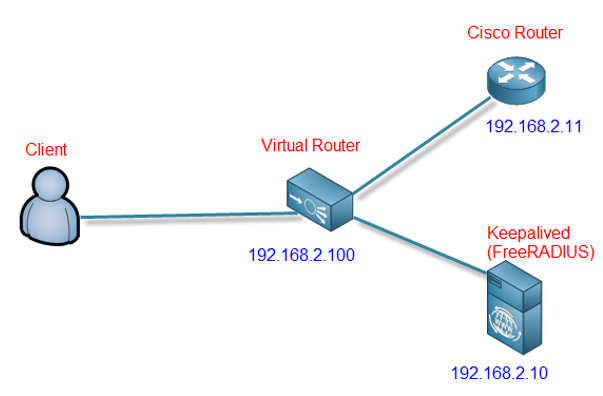 In this article, I will configure “keepalived” tool and a Cisco’s router to simulate high availability (VRRP) while analyzing the packets with Wireshark.  The scenarios can vary, you can even  use multiple FreeRADIUS instance with keepalived tool.

Configuring a Cisco’s router for VRRP

Step-3: Configure an IP address on the interface.

After configuring VRRP on the router, it changes its state from Backup state to Master state. Following output shows the transition.

Step-9: Verify the configuration with the command below.

The output shows that the node is in the Master state and uses 192.168.2.100 as virtual IP address. We set the virtual router id (Group) to 20 (in decimal), which is used to create a Virtual MAC address last byte in hex format (Dec → Hex, 20 → 14). Master Down interval is a function of 3 times the advertisement (defaults to 1 second) + the skew time. The Backup node waits for that amount time, then if there are still no advertisements from the Master, it chances its state to Master. The new Master starts to send multicast packets to 224.0.0.18 IP address every 30 seconds.

Below shows the same output in Wireshark. 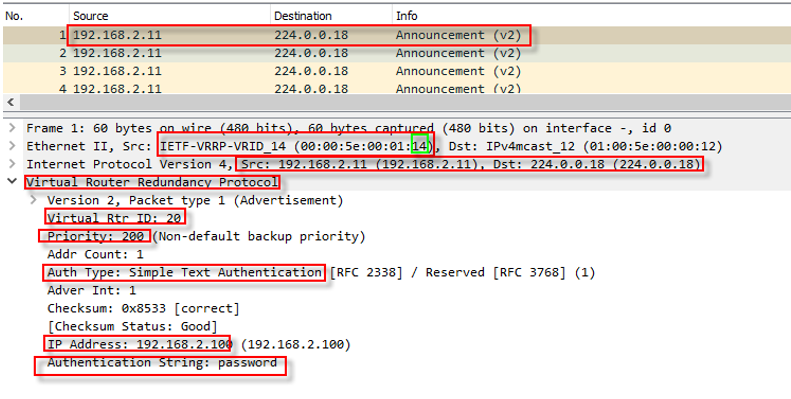 Step-3: Confirm that there is “keepalived.conf” file in /etc/keepalived/ directory.

If it doesn’t already exist, we need to create it.

Step-4: Create the configuration file with your preferred text editor.

The configuration starts with defining a vrrp_instance block. We set almost the same parameters as we configured for the router between curly braces. Keepalived will claim Master state in the beginning and finalizes its state during multicast advertisement. Since Keepalived priority is higher than Cisco’s router, we expect it taking the Master state. The table below summarizes the configuration.

ALSO READ: How to Integrate FreeRADIUS with Active Directory [Step-by-Step]

At this point, VRRP should work successfully.

Step-1: After configuring the keepalived server, it should be in Master state since it has the higher priority. To verify that, run the command below on the router.

The output shows that the router is in the Backup state. Remember that this node was in the Master state before we ran keepalived with priority of 210.

Step-2:  Verify that keepalived is the Master node on the Kali with “ip add” command.

The VRRP packets sent by keepalived are below. 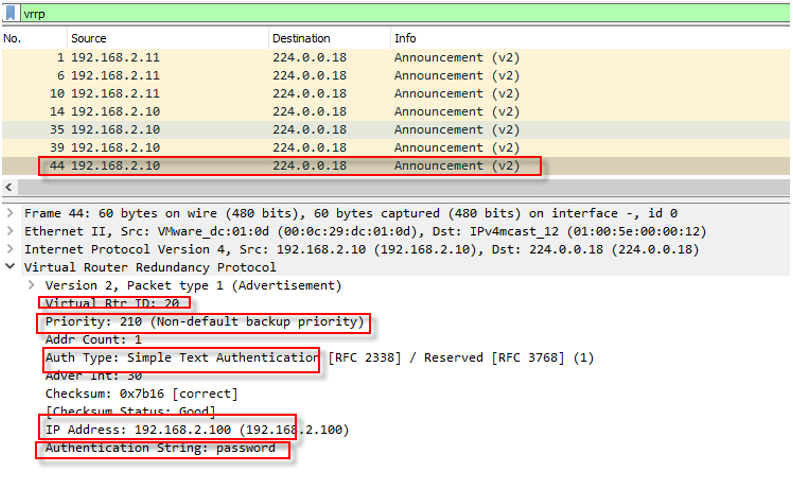 Step-4: Shutdown eth1 interface of keepalived server and observe if the router becomes the new Master.

Step-5: Go and check the router from console/terminal to see the logs related VRRP. My logs are below.

The logs show that the router has transitioned from Backup to Master state.

Organizations in enterprise level need a system that can be continuously operational for a desirably long time. In cases like that, the solution is high availability. Keepalived is one of the best service that can provide this with using VRRP.