The developers need to understand and troubleshoot the issues that arise while developing the application. Most of us know that SSH is used to obtain remote shell access to the system in order to debug any issues or perform some execution. In the context of dockers, there are a lot of ways to SSH into the docker container and perform some execution or troubleshoot the issue.

In this article let us learn how to SSH  into a Docker Container.

There are several ways in which you can ssh into a docker container. Let us go through various methods to do so.

We can do a docker exec using the docker CLI command and enter inside a running container. Further, you can execute any commands inside the container with the help of the docker exec command.

where options can be the following

Let us understand more about this with an example. Pull the Nginx docker from the public docker hub

Now, let us run the image and build the docker container

Now, let us check if the container is up and running with the docker ps command

Once you hit the above command, you will be inside the Nginx docker container and can execute any other command.

So, with docker exec, we will be able to check the processes running inside the container, list the files and perform other operations as if you are doing it on the local system.

Another alternative to using docker exec is to use Docker attach command which typically lets you attach the standard input and output to the running docker container.

This means that whatever you enter into the terminal is forwarded to the running container and anything that is printed will be shown in the console.

where options can be the following

Lets us take a look at this scenario to understand better.

Let us run the Nginx container using the command given below.

This will result in creating the container

After you run the command, hit the URL http://localhost:8080/ which shall open up the Nginx page and also observe the terminal output which is shown below.

With this approach, we understand that the docker attach command allows you to view the ongoing output or control the docker interactively similar to running the commands from the terminal.

Let us take a look at this case where we install the open-ssh server as part of the existing base image and run the container.

Let us create a docker file that installs the open-ssh server and build the image.

Now, let us create a docker image with the name as 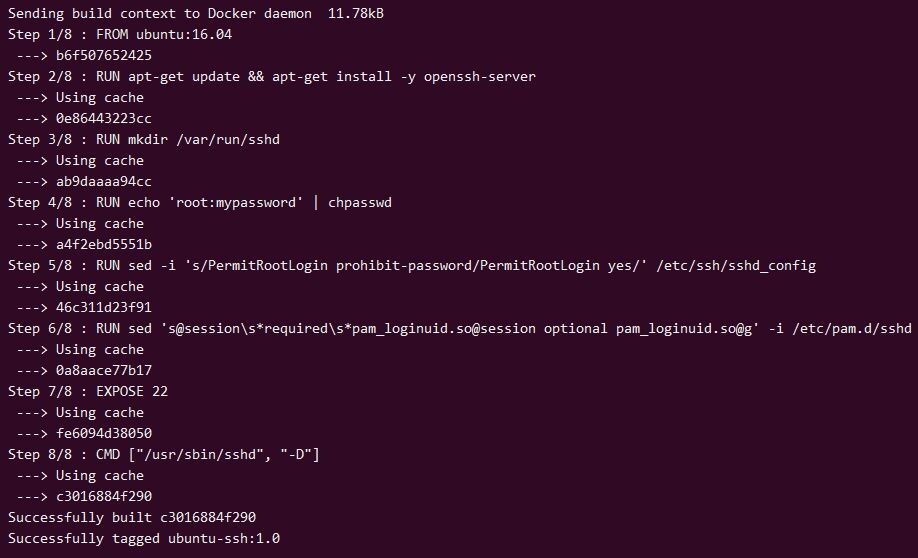 Further, let us run the docker container in the background using the -d option and also expose the ports defined in the dockerfile and see that the container is created as shown below.

When you run the command, you will see that port 22 which is exposed as part of dockerfile, will be mapped to some port on the host system.

Up next, let us find the IP address of the docker container which can be used for SSH using the docker inpect command.

In case you have connectivity issues with respect to sshd, please make sure you have root access to containers and you have updated permissions to sshd_config file appropriately as shown below for /etc/ssh/sshd_config

Below is the snapshot of the config file.

NOTE:
The method of enabling SSH into the docker is highly not recommended as it involves security risks and requires additional capabilities since you have to manage the keys and protect them from wrong edits or changes. Hence, please think twice before using this approach and if you are not sure of having it, then avoid it. Although there is a way to start SSHD service without any capabilities inside a container so you may also try that approach.

As a developer, it is important that we know our applications are running as expected, and in case of any issues, we should be able to access the system to troubleshoot the issues that arise.

In this article, we have learned about how to SSH into the docker containers. I hope this article makes it clear to you and I suggest everyone try it out.

In case you have any doubts, please feel free to add your questions in the comment section below and I shall try to respond at the earliest.

ALSO READ: How to Logout from Docker Registry? [SOLVED]