Ether and Bitcoin are comparable in many ways:

However, there are several significant distinctions between the two most prominent cryptocurrencies in terms of market capitalization.

Focusing on below image, in the Bitcoin protocol addresses map the transactions from sender to receiver. The only program that runs on the blockchain is the transfer program; given the addresses and the key signature, this program can transfer money from one user to another.

Ethereum generalizes this concept by placing an EVM at every node so that verifiable code can be executed on the blockchain. Here, the general scheme is that an external account will pass arguments to a function, and the EVM will direct that call to the appropriate contract and execute the function, granted the appropriate amount of ether and gas are supplied. As a consequence, every transaction in Ethereum can be considered a function call. 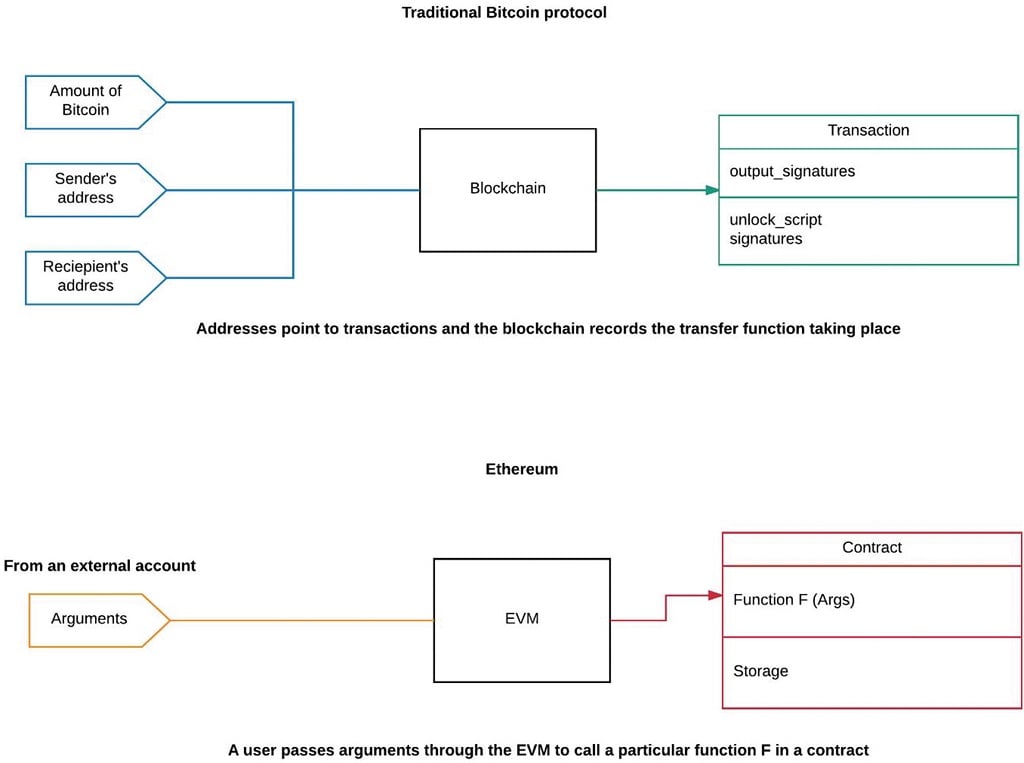 Bitcoin was first introduced in January 2009. Satoshi Nakamoto proposed a novel concept in a white paper. Unlike government-issued currencies, Bitcoin provides the promise of an online currency that is secure without the intervention of a central authority. Bitcoins are balances that are tied to a public ledger that is cryptographically secure.

Although Bitcoin was not the first attempt to build an online money of this type, it was the most successful in its early attempts and became known as the pioneer, in some respects, of almost all cryptocurrencies produced over the previous decade.

The notion of a virtual, decentralized currency has garnered recognition from regulatory and government bodies throughout the years. While Bitcoin is neither an officially recognized form of payment nor a store of value, it has carved out a place for itself and continues to survive in the financial system while being frequently examined and scrutinized.

Blockchain technology is being utilized to develop applications that go beyond merely including digital currency. Ethereum, which debuted in July 2015, is the most popular and well-established open source decentralized software platform.

Ethereum enables the development and deployment of smart contracts and decentralized applications (dapps) with no downtime, fraud, supervision, or intervention from outside parties. Ethereum has its own programming language that runs on the blockchain, allowing developers to create and execute distributed applications.

Ethereum has a wide range of possible uses and is built on its own cryptographic token, ether (usually abbreviated as ETH). Ether is largely used for two purposes:

Key Differences between Ethereum Vs Bitcoin

Ether (ETH) is arguably the second most popular digital token after Bitcoin (BTC). In terms of market capitalization, Ether and BTC are the second and third largest cryptocurrencies. Bitcoin and Ether have substantial distinctions, although they are similar in many aspects. Ethereum allows for the creation and implementation of smart contracts and decentralized applications.

Developers utilize Ether to build and run apps on the platform's network. While Bitcoin is accepted in many places, it has not yet served as national legal tender in El Salvador. Smart contracts on ETH allow two parties to perform a transaction, like as buying a house or renting a cab.