Introduction to for loop in Java

While writing code, sometimes, there might be a situation when we need to execute a block of code several times. In general, these statements execute in a sequential manner: The first statement in a function executes first, followed by the second, and so on. But this makes the process very complicated as well as lengthy and therefore time-consuming. However, programming languages provide various control structures that allow for such complex execution statements. One of such control structures is java for a loop.

In this tutorial, we will learn about for loop java from very basics to advance level concepts. We will cover the initializer, condition, and post iteration in for loop java by taking various examples.

We will also discuss the break and continue statements and see how we can use them in for loop java. Moreover, we will also learn about for each loop Java and see how it actually works. In a nutshell, this tutorial is going to be one of the best and informative tutorials about java for loops.

Getting started with for loop Java

The for loop in Java is an entry-controlled loop that allows a user to execute a block of a statement(s) repeatedly with a fixed number of times on the basis of the test expression or test condition. See the pictorial representation of for loop java below: 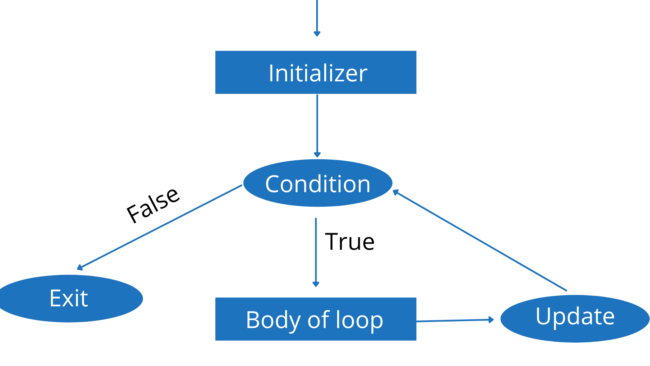 In this section, we will discuss the basics of java for a loop including the initializer, condition, and post increments. But first, let us start from the syntax of for loop java.

Syntax of for loop in Java

All the loop-control elements of for loop java are gathered at one place, on the top of the loop within the round brackets(). See the simple syntax of java for loop below:

It is important to have an initializer but is not required. We can have a for loop without the initializer as well which we will discuss later.

See the example below which provides a condition that the num should be less than 5, otherwise the loop will not be executed.

The above loop will be executed until the num becomes equal to or greater than five.

The third statement in the for loop java is the post iteration statement or update. This statement is executed after each iteration and is typically used to update the variables that control the condition statement. For instance, it increments numbers each time.

Now let us see the following example where we update the condition each time the loop iterates.

Now our for loop is complete, we initialized an integer value and defined it to be equal to zero. Then we provide the condition that this loop should be executed until the num is less than 5 and in each iteration, we update the num and increment by 1.

Example and syntax of Java empty for loop

If we run the code, it will do nothing, because the loop is empty and there are not any statements to execute.

Example and syntax of java infinite for loop

Now there are many ways to form an infinite for loop java. One of the simplest ways is to create a for loop without any of the three ( initializer, condition, and update) inside the brackets. See the example below:

This is totally a correct way of writing for loop java, if we will not provide any of the parameters ( initializer, condition, and update), the loop will be considered to be an infinite loop. If we run the above program, the loop will execute infinite times.  Another way to implement java infinite for loop is to provide a condition that is always true. For example, see the program below:

Notice that the condition is always true in the above case because we are incrementing the value of I each time. Such a loop will be also an infinite loop. We can terminate or stop the infinite loop by pressing ctrl+C on keyboard.

For loop in Java with break statement

The break is a keyword that is used to stop the execution of for and while loop even if the condition is true. It is helpful if we want to stop the for loop at some specific point.

See the example below which stops the execution of for loop even the condition is still true.

Notice that we stop the execution of for loop java when the initial condition was true by using the break statement.

For loop Java with continue statement

The continue statement is used in java while and for loop which simply skips the specific condition and continues with another iteration. It is useful when we need to skip some part of code when a condition is satisfied. For example, we want to print the numbers from 1 to 9 without printing the number 7. See the example which uses the continue statement to skip number 7.

Notice that the number 7 was not printed, because we skipped it using java continue statement.

A nested loop is a loop that appears in the loop body of another (outer) loop. The inner or outer loop can be any type: while, do-while, or for. In this section, we will discuss the java nested for loop which is simply a java for loop written inside another for loop. The inner for loop totally depends on the outer loop, if the first condition is false then the inner loop will never execute. Before going into the details and examples of nested for loop, let us first see the syntax.

Syntax of Java nested for loop

The syntax of nested for loop is very similar to simple for loop with a difference that the body of outer for loop contains another loop. The simple syntax looks like this:

We can use as many for loops as we want inside one another.

Example of Java nested for loop

Let us now take an example and see how we can use nested for loops in java. See the example below which print the table of numbers from 1 to 5 using nested for loop.

For each loop Java

In this section we will look at the syntax of for each loop Java and then will solve an example using it.

Syntax of for each loop Java

The syntax of for each loop Java is a little bit different from java for loop. It starts with the keyword "for" like a normal for loop. But instead of declaring and initializing a loop counter, we declare a variable that is the same type as the base type of the array followed by a colon which is then followed by the array name.

See the simple syntax of for each loop Java below:

Notice that there are no any initializers and conditions.

Example of for each loop Java

See the example below:

Now let us iterate the array using for each loop Java and print out all the elements. See the example below:

Notice that it is more simple and easy to iterate an array using for each loop Java rather than using for loop.

The for loop is used to repeat a section of code known number of times. Sometimes it is the computer that knows how many times, not we, but it is still known. In this tutorial, we learned about for loop java. We covered everything that you need to know in order to start working with java for loops.

We learned about empty for loop, infinite for loop, and how we can use the break and continue statements to control the flow of iteration. Moreover, we also discussed each loop which helps us to iterate over arrays and collections. All in all, this tutorial contains all the information along with examples for beginners.