A branch refers to a specific line of code that programmer’s collaborating on a project employ to make new commits. Git identifies the original branch as the master/main branch/default branch. When creating additional commits, the master/main branch will always connect you to the last changes that you will make.

Are you in doubts about how to create a git branch while working on a shared repository?

Do not worry because in this tutorial we will walk you through how to work with git branch. While using examples, we will demonstrate how to create a branch and push it, create a git branch from another branch or a commit, and delete a git branch.

Git branching enables a team of developers to develop copies of the production they are working on.  While working in the git environment, they can add new features and also fix bugs. Once they are satisfied with the changes, git will allow merging the changes into the main production.

The diagram below is an illustration of the git branch concept. 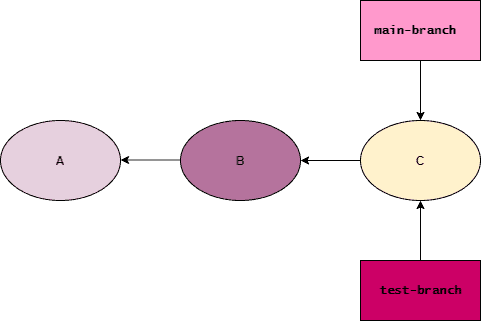 From the diagram above, we have the main/master branch pointing to the last commit C in the sequences of events.

If you make an additional commit, it will be added according to your active branch i.e the branch of focus when you ran the new commit as illustrated below: 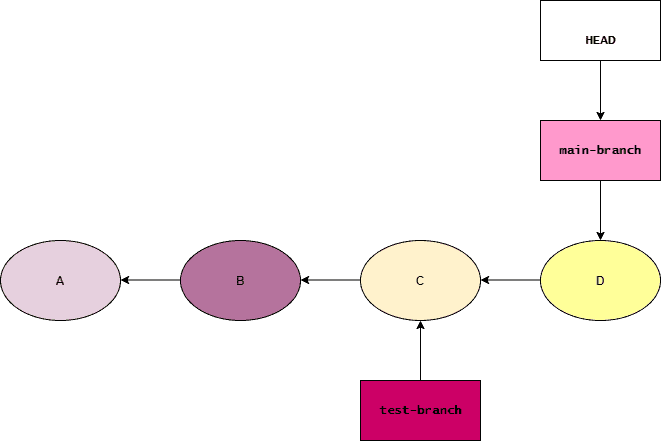 Git uses the HEAD to know the active branch within your repository. The head doesn’t automatically point to a new branch created as it does with new commits. We will illustrate how this works using an example further in the tutorial.

The advantage of working in a git environment is that your codes are secure and intact for easy tracking even when you collaborate with other developers.

Getting the lab environment ready

We will begin with the basics by setting up a project that we will use for practice to demonstrate how to effectively work with git branch as the topic for this tutorial.

I will set up a remote repository git_prac and clone it to my local workstation windows 10 pro bearing in mind that I will be collaborating with other programmers. Also, I will add a few files that we can work with for this experiment.

Now that we are set with our local repository we will be making changes using the terminal to understand how to work with git branch.

Note that it is through git branching that you will be able to get snapshots of the different changes that take place in all the production.

Create a new branch in git

There are 5 methods to create a new branch using git CLI.

NOTE:
These branches are created locally on your workstation. We must commit and push the changes to also have this branch on the remote repo. We will discuss this in the latter part of this tutorial.
IMPORTANT NOTE:
Advertisement
It is important to check that the new branch which you plan to create doesn’t already exist remotely as that will create an error/conflict for your pull or push request.

Using our local project git_prac, we will create a new branch called bug_fix.

First, we will use  git branch –a command to see all the available branches in our main branch.

From the sample output, we only have remote branches apart from the main which already has a local one by default. git branch –a command usually samples out both remote and local branches in an active repo.

Next, we will now use  git branch command to create a local branch  bug_fix:

We have successfully created a new local branch called bug_fix.

Understand that when you use git branch to create a new one, git will not switch to the new branch automatically. In this experiment, we see that the main branch has a steric before it which shows that it is the active branch. In git, the active branch is identified using a different colour and a steric.

To see where the head is pointing, you will use $ git log --oneline command as illustrated below. Remember we earlier said that the HEAD will always point to the latest commit.

Here we have the HEAD pointing to the last commit just as expected.

This method will allow you to create a new branch and concurrently switch to it, unlike the git branch command. –b is an alert that communicates with git to first run the new branch followed by git checkout.

Let’s illustrate how that works using an example. We shall create a new branch called hotfix-1 using git checkout -b <branch> command.

We have created a new branch hotfix-1 and automatically switched to it as shown above.

Commits as simply snapshots of the events taking place in a branch history. You can create a branch from a past commit in case there’s a need for working on that particular commit. The first step you will take is to run git log command.  That will display the list of all the commits in the specified branch for you to choose which one to work on.

Let us implement this first step after adding a few files in the new branch hotfix-1:

Next, you will use git log to view all commits in our active branch hotfix-1 including our latest commit. Not that the HEAD is pointing to the last commit and not the active branch bug_fix. The reason for this was explained earlier under our first method.

Lastly, run git branch to see your newly created branch hotfix-now from a commit-two-22a2d98 as shown below.

A stash is simply temporary storage in git for the changes that you make in your active directory before committing them. It is most helpful if you are running a series of tests on your code and you are not sure which one will work out. You can always store such tests in a stash to later review and pick what you feel comfortable applying in your project.

You can learn more about git stash at git stash explained in detail with examples, we will now create a stash that we will later turn into a branch.

You can perform some changes in your local repo and then execute git stash to stash the changes. We will create the new stash in our bug_fix branch in the local repo using git stash command as expected.

As you can see, we now have created a stash in our working directory shown above, let's progress to create a new branch bug_fix-a from the stash. You can do this by using either git stash <branch name> or git stash branch <branch name> stash@{stash-index} command for this process.

We now have our new branch bug_fix-a created from the stash illustrated in the example. You also can tell from the output that there are some changes stored to be committed later. That further explains the importance of using git stashing as we mentioned in the introduction of this section.

To create a remote branch you will first clone a remote repo which you will be working on just we did when preparing our lab environment for this tutorial.

Let us create a new branch test-r-branch which we will later push to create a remote copy.

To create a remote branch from our local workstation. We will need to use git push --set-upstream origin <branch-name> command. For this case, let's push the newly create test-r-branch so that we can have a remote copy of it.

How to identify a remote branch in git

Let’s practice that in our git_prac experiment by running the git branch –r command.

We have three remote branches inclusive of the main/master branch from our local repo git_prac.

It is fine to delete a branch once you finish working and merge the changes into the main branch both local and remote. In this section, we will practice how to delete a local branch and a remote branch.

How to delete a local branch

To delete a local branch in git, you will use git branch -d <branch name> command. It is essential that you merge your changes successfully into the main branch. That will enable you to run the delete command without conflicts/errors.

We will illustrate this process using an example as shown in the steps below;

Step 1: Creating a remote copy of the local branch

In this example, we will delete the hotfix-1 branch from our active repo git_prac after pushing it remotely using git push --set-upstream origin <branch name> command.

If we run git branch -d <branch name> command at this point we will run into an error. Why? It is because we still have it as our active local branch. We will first switch to the main/master branch and then run the delete command.

In this step, we can proceed to delete the branch after successfully switching to the main branch as shown below.

Git delete is implemented as shown in the output. To confirm let's run the git branch –a command to view all our remaining branches.

How to delete a remote branch

It is also permissible to delete your remote branch once you merge the changes into the main project. However, you will use a different command which is git push origin --delete <remote-branch-name>

Let use an example to illustrate the process.

Step 1: Identifying all the remote branches

You will use the git branch -r command to see all the available remote branches for the current local repo git_prac for this scenario.

We will proceed using the git push origin --delete <your_branch> command to delete a specified remote branch. For this practice, we will choose to delete remote E after pushing it remotely using the git push command. It is important to push the changes to our remote repo first before deleting them. That will help you to avoid having an error/conflict. Remember git is always keeping copies of all the history of commits in a branch both locally and remotely.

Push the changes to remote repository

It’s alright to label your branches with any name that you prefer. However, practising naming them according to the various stages of the project makes it easier to make references while working with others.