Git uses branches to facilitate work progress by multiple programmers on a collaborated project. Git change branch name commands like git branch and git checkout are used by developers to correct wrong branch names in git. Upon assignment of responsibilities in git, each developer can independently make changes to codes without being held back by others.

git branch command is what you will use for creating branches and to change the name of a branch.

In this tutorial, we shall discuss steps that you can use to change a branch name in git. 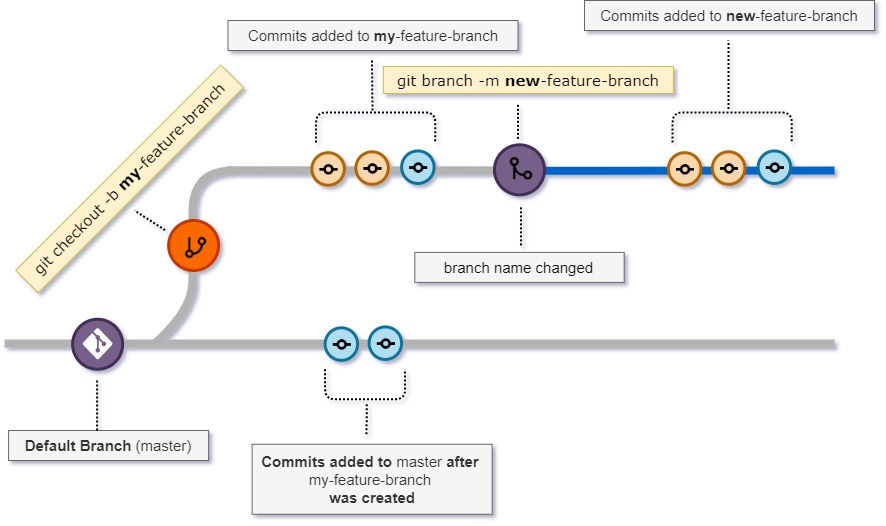 We can use the following syntax to change the branch name:

OR if you are already inside your old branch which you intend to rename then you can use:

It's vital that you set up a lab environment that you can use to practice your codes. For this tutorial, we will clone a remote project change-b-name to our local workstation. We shall then practice using it to run the git change branch name exercise.  I will be working with windows 10 pro and git version 2.32.0.windows.2.

Below is the output after running the git clone command:

Git employs the git branch –m <branch name > command to change the name of a branch. –m option allows you to edit the new name and pass it as the correct branch name. Below are the basic steps you can follow to change a branch name:

Step-1: Switch to the branch that you want to change the name in git

It is important to ensure that you are on the branch that you wish to change the name.  You can use the git checkout <branch name> command to confirm or switch to the desired branch for the name change process.

We shall demonstrate how to switch to a branch another using the example below:

Next, we will run the git branch –a command to view all the branches in our local repository as follows;

From the output, we now have the new branch text-branch displayed among the active repository’s branches.

Lastly, we shall then push the changes upstream as shown in the sample output below:

While at this point, we realize that we have named the branch wrongfully and we need to change the branch name. How do you accomplish that?

First, let’s ensure that we are on the text-branch before proceeding to the next step by running the git checkout <text-branch> command:

To change the above branch text-branch to the correct name feature branch we shall run the git branch –m <branch> command as illustrated below:

From the results, we have successfully changed the local text-branch name to feature. Note at this stage that we only changed the name of the local branch, and that doesn’t affect the name change remotely.

Now that we have changed the branch name locally, we should also push the same change to remote repository.

To proceed to change the feature name remotely, we shall run the git push origin :< old-branch-name> <new-branch-name> command as follows:

Now, we also have the remote branch name test-branch changed to feature as shown in the output. Note that the above command will delete the text-branch from the remote repository.

NOTE:
If you don’t have a remote branch text-branch and you push the feature branch upstream like we just did, you will run into an error.

Understand also that at this point only the branch reference for the new name was changed in the remote, and not the changes committed in the branch.

You will need to run another step to push related changes/commits in the feature branch to the remote repository change-b-name as follows:

We successfully pushed the committed changes upstream. Now both the local and remote branches are up to date.

To change the local master branch name to main we shall run the following process:

Notice the git status confirms the name change from master to main. Next, we shall proceed to make similar changes in the remote repository.

Before proceeding, understand that git will not allow pushing the name change upstream without first creating a remote branch named main. Assuming that we are still on the main branch, we will now push to remote the main branch as shown below:

The above results confirm that we have a new remote branch main.

Next, we will delete the origin master branch to complete the process by running the git push origin --delete master command.

We have run into an error!

The success of this step depends on the default set-up for the branch settings in your Github account. You will therefore require to change the default branch settings to main as shown in the screenshot below before running the git push command again.

However, if your account has the default branch settings set at main, you will not experience such an error.

How to erase a local branch from a local repository

To delete a local branch in git, we shall use the git branch –d <branch name> command as demonstrated below:

In this example, we shall delete the local feature branch.

We have now deleted the local branch feature as displayed in the output.

Remember that for you to run the process without errors, you should have the feature branch upstream. Alternatively, you can apply the git branch -D branch name command to forcefully delete the local branch even when there’s no upstream copy. That way you will avoid running into an error.

How to erase a remote branch from a git repository

In this example, we shall delete the remote tester branch in our change-b-name remote repository as follows:

We have discussed the following topics about git change branch name: