However, failure to deeply understand the command could prevent you from applying it correctly. Worse yet, you may not distinguish the checkout command from other git commands such as clone, restore, remove, reset, and revert.

This tutorial simplifies deploying the checkout command. It explains the challenging parts of git checkout using relatable words and examples. Read on to learn more.

Alternatively, you can overwrite contents in the working tree to match the specified file in the index.

Replacing the -f with the -p option

shows the diff through an interactive interface.

On commits, the command detaches the HEAD.

Lastly, git checkout plays a massive role in branching. You can switch between existing branches,

create a branch and move into it,

or navigate to a remote branch.

Let us dive into git HEAD and branching.

A simple explanation of git HEAD and branch

You should understand how git stores snapshots of your changes before applying the checkout command.

Initializing a repository creates a .git subdirectory in the filesystem. In git, a filesystem is a directory whose files and subdirectories you are modifying. A repository, on the other hand, is a collection of commits.

In technical terms, git is a version control system API for tracking objects and a naming system for the objects: refs.

A branch is a named reference to a commit. The last commit, also known as the repository tip or HEAD, gets tracked in the HEAD file. Switching between branches modifies the contents of the HEAD file.

content is ref: refs/heads/main. That means the tip of the latest commit lies in the main branch.

Assume you then create the second branch and switch to it. The contents of the HEAD file

Where git checkout comes in a typical git workflow

Think of checkout as a compound word of check + out, which means "explore the contents of something."

Say you have committed to multiple branches and want to update the refs. Or you want to retreat your steps to a particular snapshot. Git checkout command comes in to help, depending on the supplied pathspec or option.

For example, during branching, the command automatically updates the HEAD file to notify git you are working on another branch.

Apart from the checkout command, you can use commands such as git rm, git restore, git reset, git revert, and git switch. Here is how to distinguish git checkout from the commands.

How to distinguish the checkout command from other git commands

git restore with the --staged option does a similar job to git rm with the --cached option.

deletes the specified commits and the affected files from the file system.

does not discard files but uncommits the changes.

Like git rm with the --cached option and git restore with the --staged option, the mixed reset

on a shared repository with a remote. Instead of discarding commits, git revert inverses them with a new commit. Unlike the reset or checkout commands, git revert only operates at the commit level.

Another specific command is git clone.

git clone differs from git checkout because it fetches remote commits into the local repository, whereas the checkout command switches commit HEAD between local branches.

Here, you create a ball of commits and throw it into the main branch with a commit message. Use git rebase to stack the commits onto the main's changes.

Commands such as git stash and cherry-pick help maintain a repository.

The key takeaway here is to use git checkout in switching branches and let other commands handle git unstaging. Besides, you can use supportive commands to ease collaboration and repository maintenance.

Enough with comparisons. Let us do some practice with the checkout command.

I am creating a repository on GitHub called git_checkout. 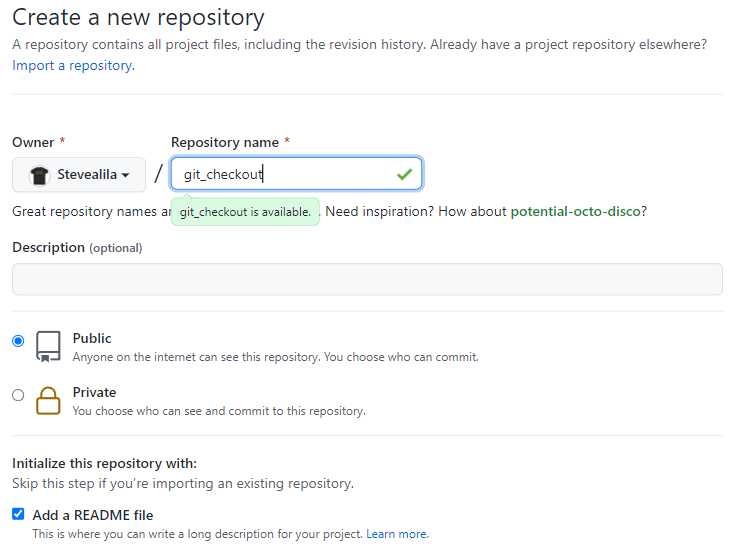 I then copy its URL and clone it on my terminal.

cd into the cloned repository and create two files, stage, and commit them.

We have three commits on the main branch.

Let us do some practice with the setup.

We can undo the last commit by modifying file2.txt, staging, and committing it, then check it out.

and recheck the status.

The changes returned to the index. 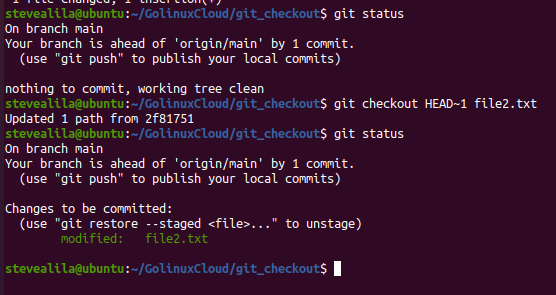 Let us log history and check out the second commit from the local HEAD.

Git tells us we are in a detached HEAD. That means the ref in the .git/HEAD file does not match a branch, as git expects it to.

The best time to check out a commit is when restoring commits after a hard reset. Let us return the HEAD to the main branch.

And restore it from the reflog using the checkout command and a new branch.

Return to the main branch and rebase the new_branch.

Example-3: Checkout and switch to an existing branch

Let us switch to the new_branch branch, add a commit, and push it with its changes to the remote. 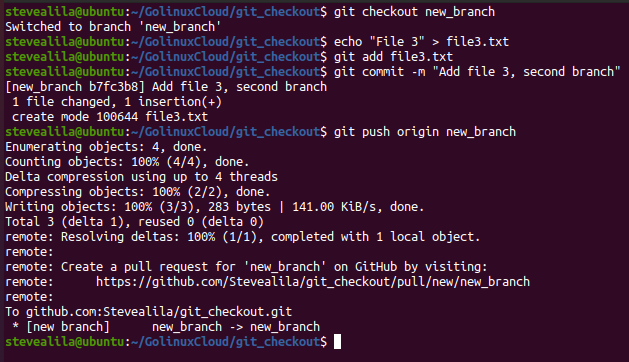 You can then create a pull request on GitHub to merge the branches remotely.

Apart from switching to an existing branch and making changes, you can create a new branch using the checkout command and the -b option.

Checking the number of branches

Example-5: Checkout and switch into a remote branch

Let us list all the remote branches using the -r option.

And switch to the origin/new_branch branch by checking it out.

That detaches the HEAD. We can then create a branch from the detached HEAD as we did in example~2 above. 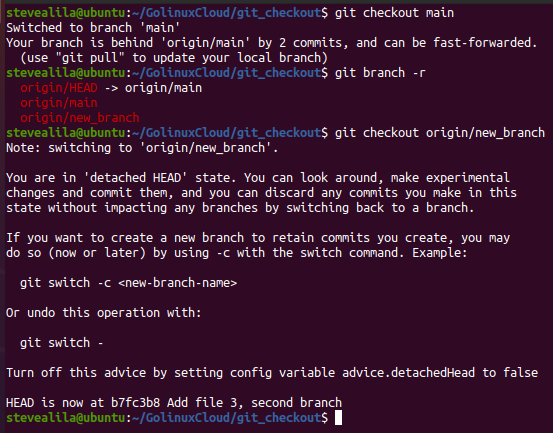 Git checkout is a multi-purpose command. It allows you to undo changes and switch the HEAD between branches. Using it effectively requires understanding the origin of the term HEAD and distinguishing the command from related commands, as explained in this tutorial.