Discarding git changes means removing changes you no longer need along any of the three levels of git workflow: working directory, index, or history.

There are many challenges and commands to focus on when doing git discard changes.

This tutorial groups the commands into either affecting uncommitted or committed changes. Using that criterion, here are the seven key commands to git discard changes:

The following command can be used to interactively discard the files.

This is similar to the previous mode, but lets you use the interactive interface to show the "diff" output and choose which hunks to use in the result.

or to discard all the changes in local working path

or to discard single file, just provide the file name with absolute path

if your git version is below 2.23. Otherwise, the recommended way to git discard changes is

for one file or

is one of the safest ways to discard changes from the index.

Doing a mixed reset to the HEAD at the index discards the changes.

A practical guide to git reset hard vs soft vs mixed

where N is the number of commits from the HEAD or

How to use git revert properly [4 Different Ways]

where the changes affect a pushed file.

You probably wonder what we mean by uncommitted, committed, or HEAD. Besides, it would be best to see practical ways to use the above commands. Read on to find out more.

The history tells more about the commit, such as the author, date created, and most importantly, a unique hash called the commit hash.

The last commit hash is often referred to as the HEAD. Changes that have not passed the index (a.k.a staging area) are called uncommitted, while those with a history are called committed changes.

Passed the local workflow, you can send the changes to a remote server on a website like GitHub, GitLab, or Bitbucket. Then the changes are pushed. Otherwise, they are unpushed.

That is the basic explanation of the commit HEAD, uncommitted, and committed changes. Let's see their role in discarding git changes.

I am creating a remote called git_discard_changes with a README.md on GitHub.

Copy the repo URL and clone it on the command line or terminal.

cd into the new repo git_discard_changes and inspect the repo status as follows.

The working directory is clean.

shows we have one file, whereas logging the history

shows we have one commit in history. Both local and remote repos' HEAD point the only commit we have. 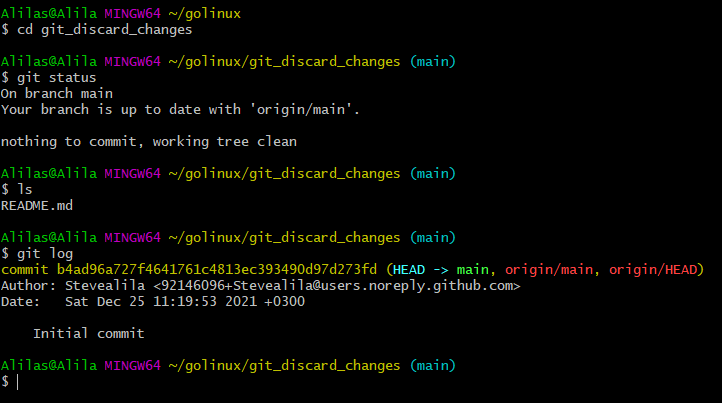 shows we have untracked files. 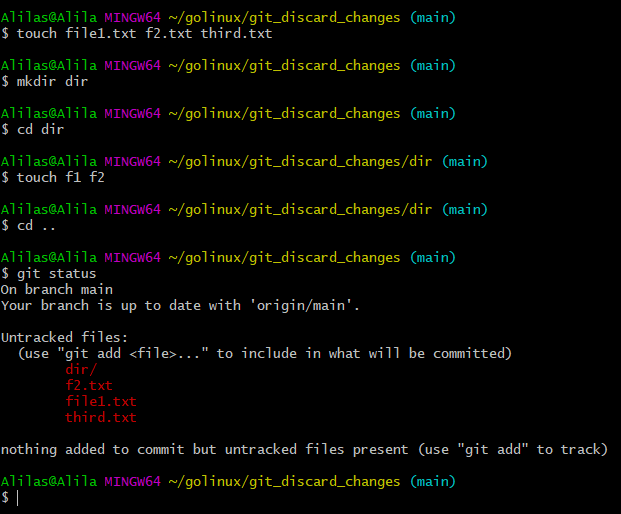 Let us git discard changes by applying the setup in the following examples.

The git clean command is crucial in discarding changes in untracked files. Although we can use it with several flags, its most familiar forms are -f for untracked files only, -fd for both untracked files and directories, and -i for interactive file discard.

clears the third.txt file from the working directory. 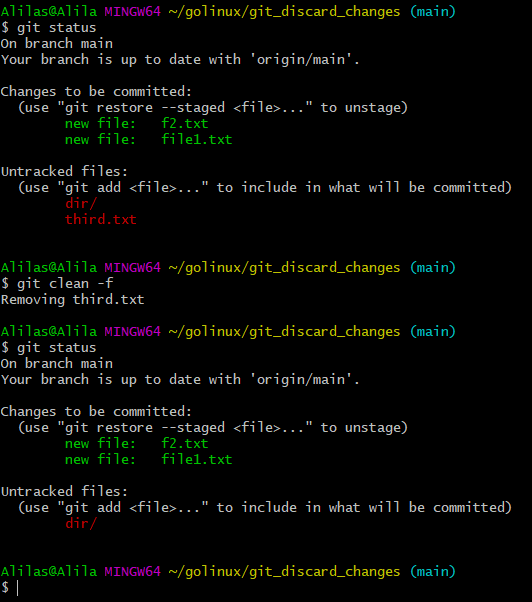 The untracked dir directory got discarded! 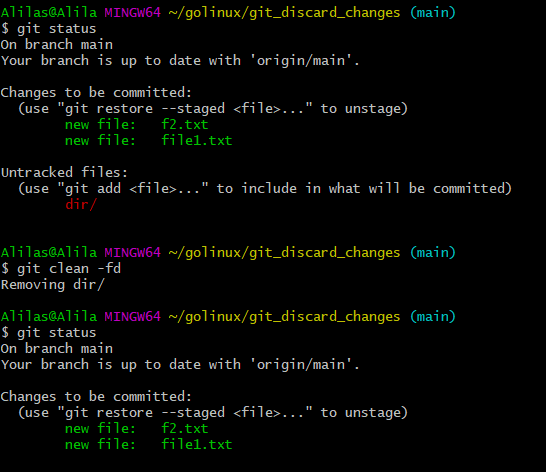 Lastly, we can use the -i flag by picking the clean option.

Git prompts us for an option. Let's pick 1: clean to git discard changes 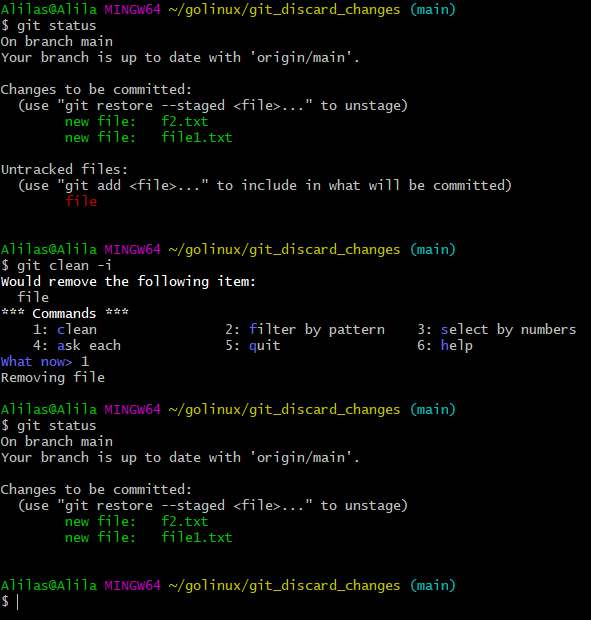 Example-2: Use either git checkout or git restore command

The checkout command has several uses in the git workflow. Apart from switching between branches and commits, you can apply it to git discard changes. All you do is be at the root of the working directory and run either

If it fails to remove your recent changes, use the restore command

which has been git's preferred way to discard changes since the introduction of git version 2.23 in 2019.

Assume we want to delete the most recent changes on file1.txt. We can do that by running the command: 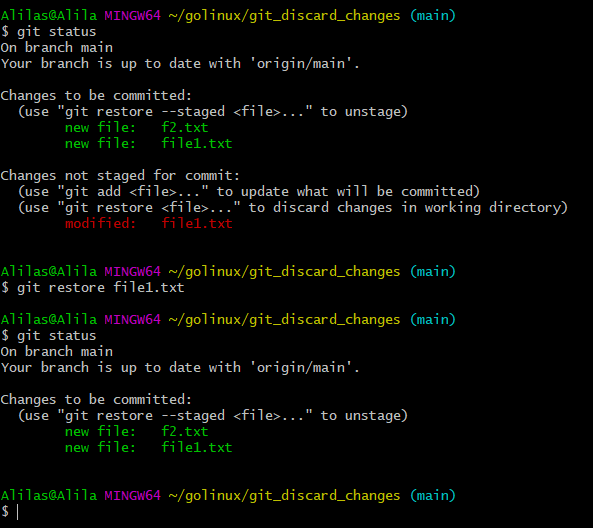 We can also modify file1.txt and f2.txt then git discard changes on them as follows

All the new changes disappeared!

Example-3: Use git stash command to stash the changes

Assume you want to git discard changes hoping to restore them later. The command to use is git stash. Before clearing your changes from the index, it records them in the .git/refs/stash file in your working tree, only retaining changes as per the commit HEAD.

Then recheck the status. 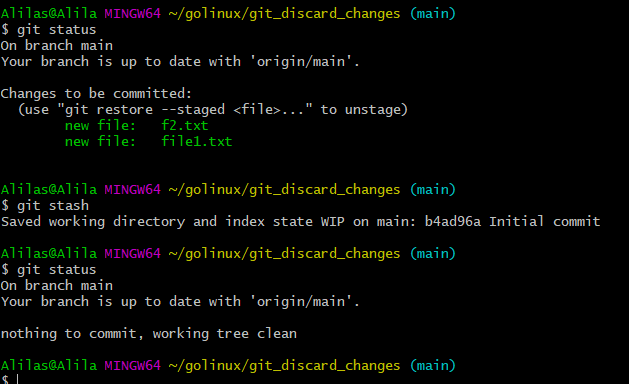 We can see the stashed changes using

and restore them using git stash apply as follows 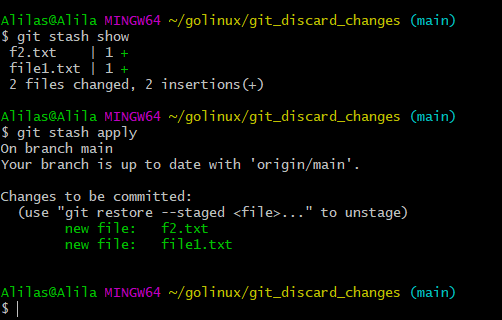 Another way to discard the changes in the index is to do a mixed reset on the changes.

untracks the files from the index and dumps the changes in the working directory. 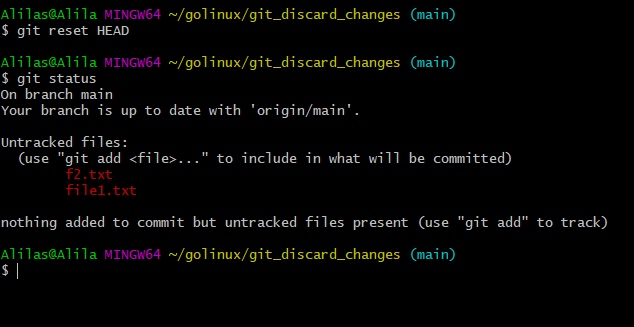 The hard reset is the most straightforward command to git discard changes already committed. We can use it as follows.

The hard reset command on the HEAD^ removed the latest commit. 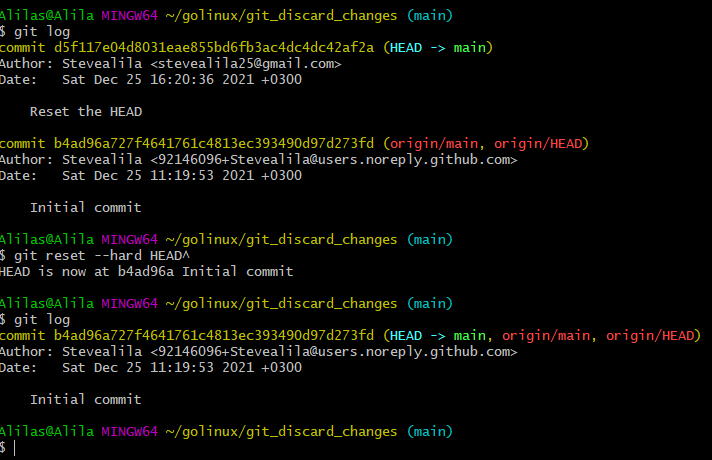 Note: git reset hard discards both changes and files from the working directory. The only way to recover the changes is to inspect the reflog and checkout the target commit hash.

Better yet, avoid the hard reset command if you have pushed the changes.

Doing a hard reset on local files can cause a conflict error when used on files already committed. Git revert is the best alternative to discard commit changes on pushed files.

shows we have four commits 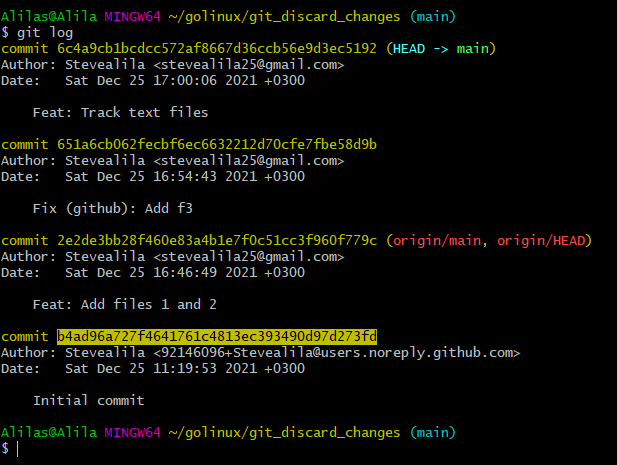 Our default text editor prompts us for a new commit message. We can go with the default message then close the text editor. 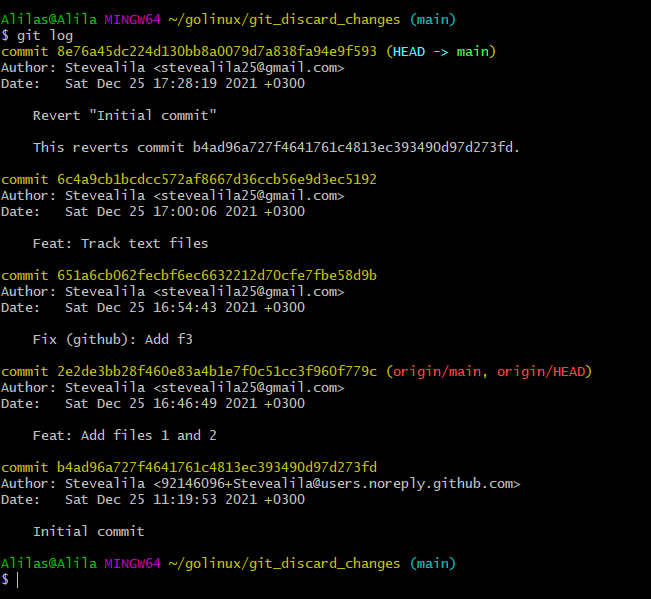 You can discard all untracked changes using the git clean or git reset hard commands. To git discard changes at the index, use the stash, checkout, or restore commands.

Lastly, you can do a hard reset on the files after committing them. If you plan to undo changes on pushed files, use the revert command instead of git reset hard.