Getting started to learn about listing branches in git

You are about to acquire an in-depth knowledge of git list branches using four specific commands. Before that, here's a quick overview of the commands:

Use following command to view all the local branches

To list all remote branches related to the current repo,

To list all branches with the latest commits in each branch.

To better understand git list branches, this tutorial walks you through the kernel of git branches, set up a lab to explore the (local and remote) branches, and practice the commands with relatable examples.

What is a branch in git?

A branch is an independent development line. Think of it as an application component that serves a specific purpose, irrespective of the folder you put it in.

Git, as a distributed version control system, is powered by branches called git branches. Mostly, the main branch exists, which used to be referred to as master before Github renamed it main in 2020.

The main branch serves most of the development needs. However, as more features and developers join the workflow, there arises the need for creating, renaming, deleting, and listing branches.

What is branch listing?

Branch listing is viewing a branch that exists in a repository.

The most typical scenarios to git list branches are knowing where you currently create features, confirming where to make push or pull requests, and preparing to check out a branch.

Now that you have a fundamental knowledge of git list branches, let us dive into practical usage of the knowledge.

I am creating a remote repo called git_list_branches on Github. 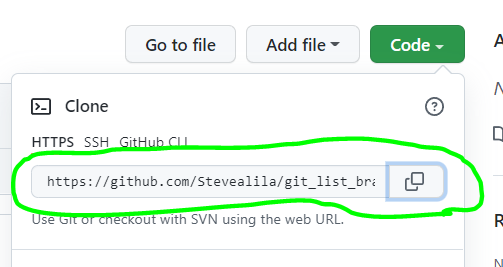 Clone and cd into it on the command line.

So far, we have one commit in history.

We have two commits in history.

In the following sections of the tutorial, we'll apply the setup through 4 git list branches commands.

It loops through all your branches in the local repo.

shows we have one main local branch.

We did not create the branch, but Github did it for us. Besides, Github added and committed changes to our README.md file. Although we can rename the main branch, it is inadvisable because it pinpoints to the remote branch main on Github, making it easier to push changes.

and rerun the command

to list all branches after adding two new local branches. 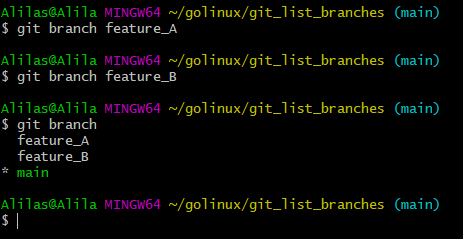 The main branch gets marked with a *, meaning we reside there. In more technical terms, we have checked out the main branch. Likewise, we can git checkout any two branches to view the same decorations, as seen in the main branch. For instance,

takes us to the independent feature_B branch with the changes made in the main branch.

We can view the changes by running the command

marks the feature_B branch with a star, and colors it with green.

We can go ahead and switch between the branches, make commits, and list them.

to view all the remote branches related to our current repo.

You expected to see one branch, right? Here is why we see two branches.

origin is git's default way of referencing a remote URL. So, origin/HEAD or origin/main means we push changes to the main branch, which is remotely accessible through the entry point HEAD.

HEAD is the default branch because it unites our local repo with the remote one, where we cloned the remote. Ignoring git's technicalities, we have main as the only remote branch and it is the branch we see on Github.

Check out the feature_A branch we created in example-1 above.

Let's push the changes through feature_A.

and refresh the remote, then recheck the commit history. 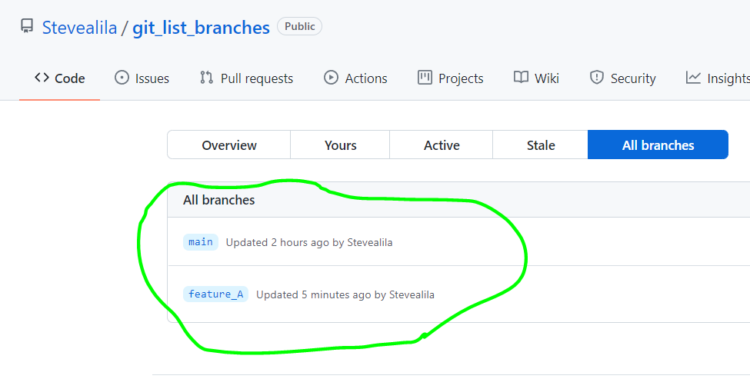 To see a similar screen as mine above, click on the repo name followed <> Code. At repo's landing page, click on the drop-down next main followed by view all branches, as highlighted below. 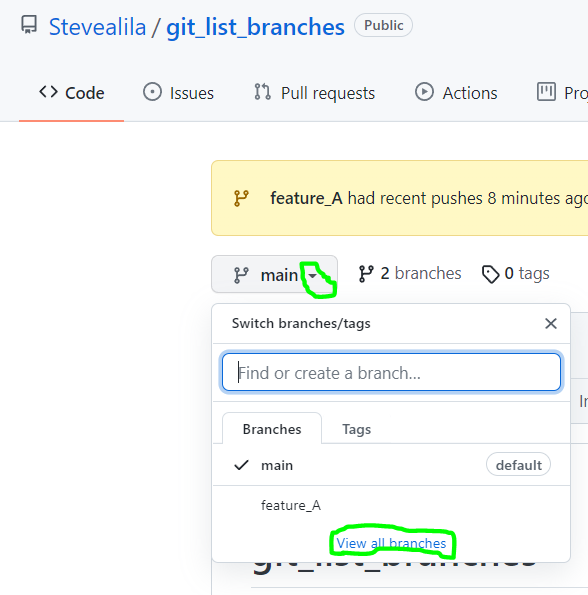 You can synchronize the newly created feature_A branch by clicking the green Compare & pull request button on Github. Follow Github's (green-marked) guidelines till all the changes are merged to the main branch. You should have a remote repo with two branches, like my screenshot below.

Return to the command line and git list branches in the remote repo.

shows we have added a remote branch, feature_A, in the workflow.

Let's merge the feature_A branch, commit and push the changes to have a cleaner repo. Let's do that using the following steps:

Doing git list branches to show both local and remote branches is simple. All you do is run the command,

as shown in the following image.

The remote branches get marked in red with two parts separated with a slash / to distinguish them from the local ones.

Additionally, we can view all branches without marking them with green or red using the grep command. To do that, run the following command on your command line.

Besides the above git list branches commands, you may want to view the commit history concerning a branch. That is when the show-branch command is helpful, as explained in example-4 below.

lists the branches with the latest commit per branch.

Technically, combining git branch and git branch -r results in git branch -a since git branch -a reveals all local and remote branches. Better yet, use git show-branch to list branches with the latest commits in each branch.