Getting started with git merge vs rebase

You should understand git merge vs rebase to do efficient branching between repos. Git merge preserves the history, whereas git rebase rewrites it.

Git merge is best for handling commits that affect several developers. Git rebase, on the other hand, is crucial in creating a more organized, linear local repo.

Assume you work on an application's new feature. You create a branch and switch into it from the main branch then implement the new features.

While working on the task, you create multiple files, add and commit them. Lastly, you check out the main branch and merge the commits using the commands:

You then push the changes to a remote repo.

Working with git rebase follows a similar pattern. You switch to a feature branch, create the file(s), add and commit them. You check out the main branch and pull changes. You then return to the feature branch and do a git rebase using the commands:

Unifying commits comes with side effects that may be contrary to your target outcome. However, that should not worry you because understanding git merge vs rebase is all you need to clear the errors.

For instance, git emerge creates a dumpy history, and you can use git rebase to organize the spaghetti commit history. On the other hand, using git rebase may lead to conflict errors when collaborating on a project with many developers. Git merge comes in to avoid those errors, as you will see in this tutorial.

Now that you know why you should understand git merge vs rebase, let us take an in-depth view of the two git technologies below.

Let us create two remote repos to ease distinguishing git merge vs rebase. I am creating a repo called git_merge

on Github to illustrate the power of git merge and git_rebase 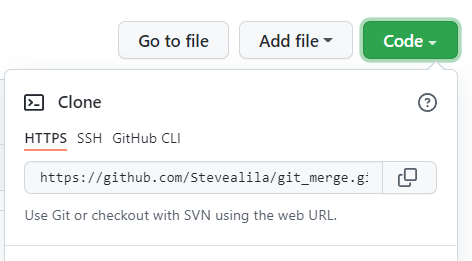 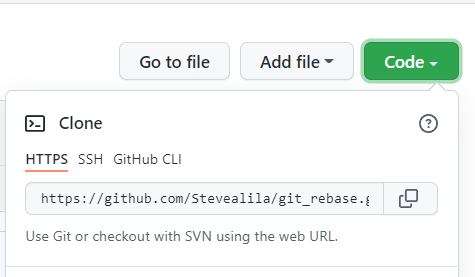 then head to the command line and clone the repos. 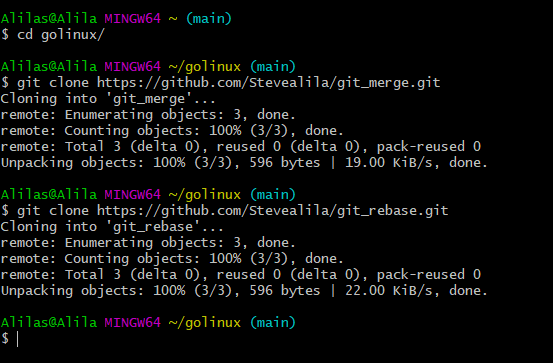 cd into git_merge or git_rebase depending on whether we handle git merge or git rebase.

You should initialize either repo if you did not create a README.md file on Github.

Create two files file1.txt and file2.txt, in each directory.

Let us stage and commit files.

to stage the files.

we see the file changed from red to green, meaning git tracks the files.

Commit the changes using the message:

We can view the commit history by running

to see the full commit hash and history or

to see a shorter version of the commit history

We have two commits in the history to practice git merge vs rebase. 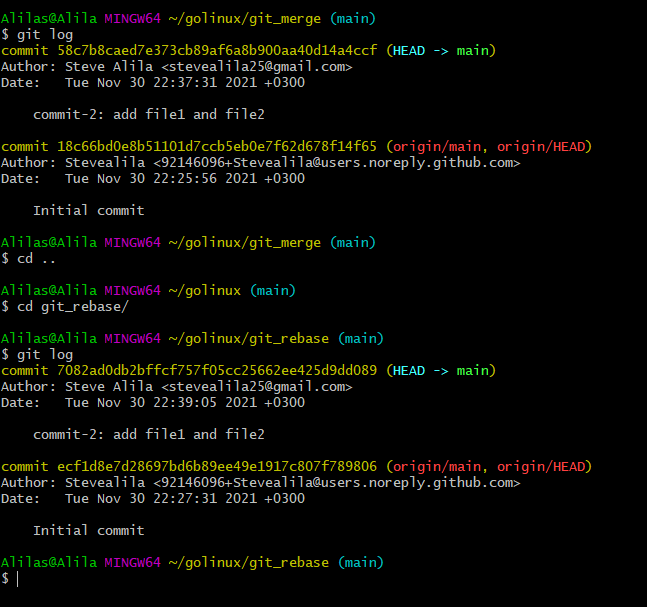 Example-1: How to use git merge

We are currently in the main branch. Create a branch called git_merge using

then check it out using the command

Alternatively, you create and check out the branch by running the command 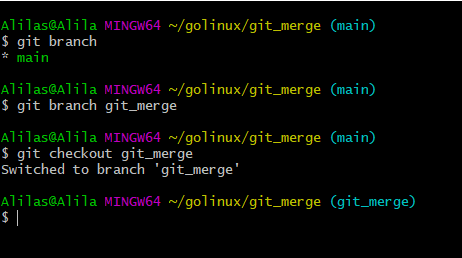 Add the files to the staging area

and commit the changes 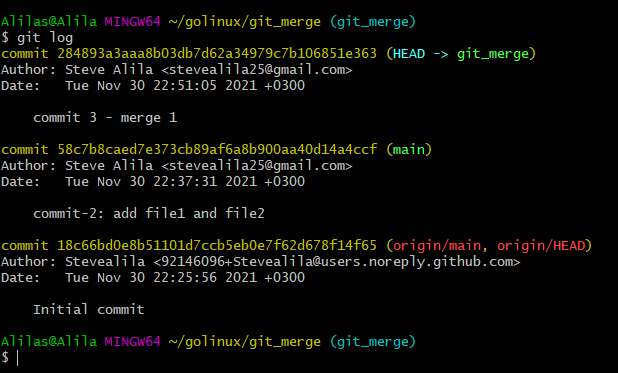 We have the git_merge branch's one commit and the main branch's primary commits, initial commit, and commit 2.

Let us return to the main branch and continue committing more changes, assuming more developers work on the same repo as you.

Check out the main branch. 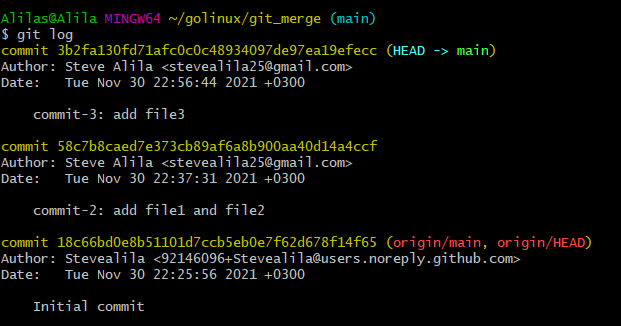 Our code editor opens up, asking us to insert a commit message. Let us go with the default one, save and close the editor. 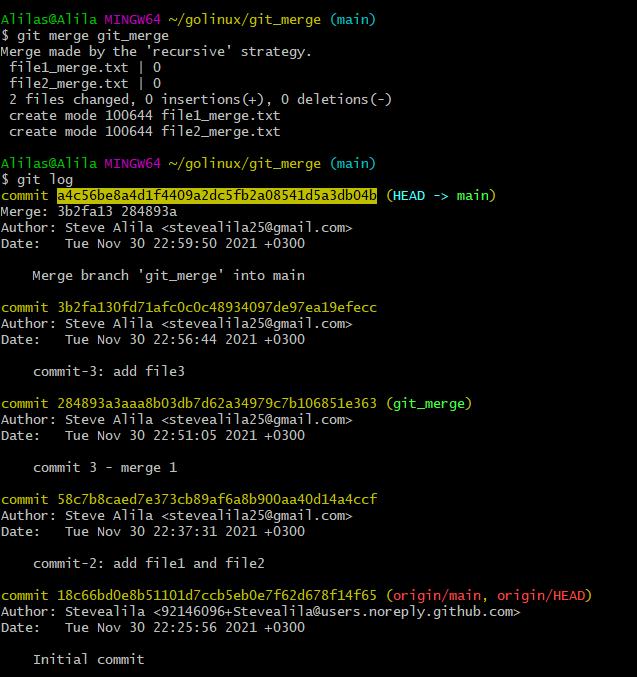 The problem with git merge

The resulting history looks jumbled up. Now imagine the disorganized history we would have if we had tens of developers creating thousands of commits in history daily.

To evade such a mess, we employ git rebase to reorganize our commit history. Before moving to the git rebase section, let us push our changes to the remote repo.

Head over to the remote repo on Github, refresh the browser, and inspect the repo. Our changes got pushed successfully. Let us explore rebase to have a more solid understanding of git merge vs rebase.

Example-2: How to use git rebase

Head over to the command line and cd into git_rebase folder we created in the lab setup section.

command to view the commit history. Currently, we have two commits in the main branch.

Let us make and check out a new branch

and commit the changes 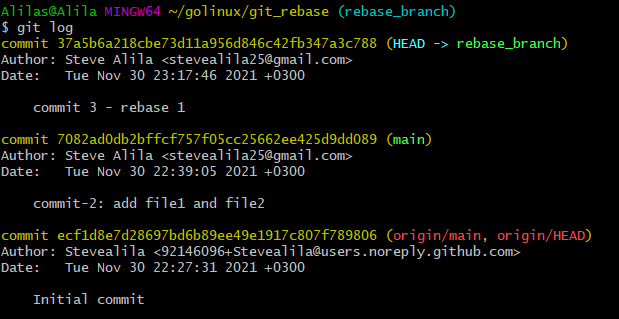 Introduce another commit in the history 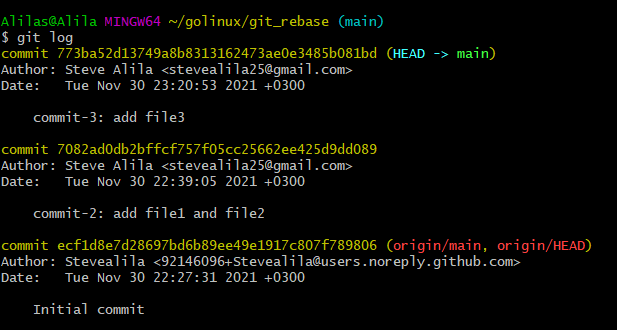 Check out the rebase_branch branch again.

Now is the time to git rebase with two aims; confirm whether there is a conflict between the two branches' history or join changes between the branches. Here, we shall only focus on joining commits because we are sure there are no file change conflicts between our branches.

This time around, our code editor does not open up to ask us for a commit message. Instead, we get a successful rebase message.

Let us analyze the effect of git rebase. 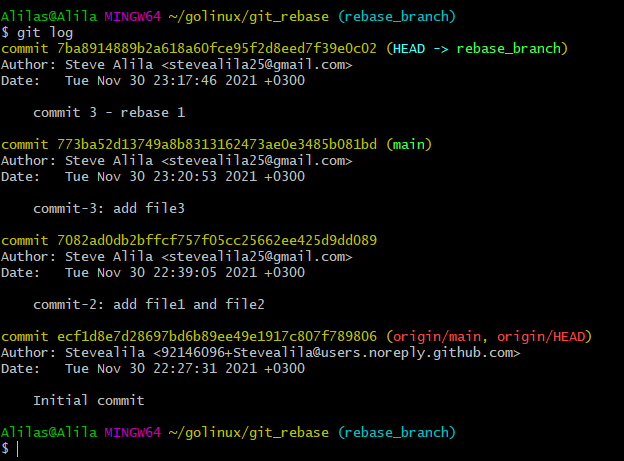 Git forwarded our commits in the git_merge branch by inserting the commits from the main branch before our current commits. The repo is now more understandable.

Also, rebasing the main branch maintains the linearity of the commit history, as you can see here. 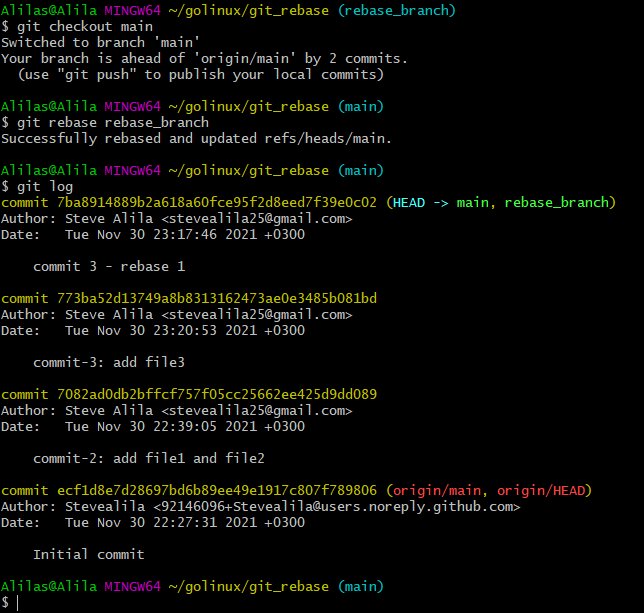 The problem with git rebase

Although git rebase creates a cleaner history, it is not advisable to use it when pushing changes to a remote repo, where several developers constantly collaborate. The team should then use git pull --rebase as shown below:

when rebasing remote branches. Better yet, it would help to use git merge.

The most straightforward way to distinguish or choose between git merge vs rebase for your project is to consider the ease of handling a remote repo and the level of history organization you need.

Git merge is best in pulling and pushing changes without caring about the linearity of the commit history. Git rebase is conducive in situations where you want to create an organized repo or check merge conflicts before joining changes between repos.