Git push is the act of linking a local branch to the respective remote repository in a git environment. That implies that all the content in your local repo gets to be uploaded to its remote counterpart. Git uses the git push command to effect this process. Understand that git push command overwrites any other changes and therefore you will have to take a lot of precautions when using it. Git push works similarly to git fetch command. The only difference is that git push transfers branch contents remotely while git fetch does the same but locally. To configure remote repositories git uses the git remote command.

In this tutorial about git push, we will demonstrate how to work with git push, git push command options and examples of git push in Github.

Following is the basic syntax of git push. To get the list of all supported options you can refer official git documentation:

Whenever you push commits to a remote branch, git stores the same changes and history. It’s essential to specify the destination remote branch for your local copy before pushing it. Without being specific git will push commits to the main branch by default. That will make your work with other developers easier and avoid conflicts. Also, you can freely run new changes to your specific codebase. Upon testing and confirming your clean codes you can push them into the main projects as part of your contribution.

Git pull is the opposite of git push as it will pull remote changes to the local project as illustrated above.

Completing the process successful means that we now have our local environment new-git-test set up and can practice working with git push command.

Let’s proceed to the next section where we will learn about various git push options and practice git push using examples.

Here we have covered some of the most used arguments with git push command:

Note: It is recommended to use the git push –u <remote> command in instances where you are pushing a branch to remote for the first time. That’s because it develops a tracking of the repository upstream once the connection is established.

Using git push origin main command implies that the associated repo and its contents will be pushed to the main/master branch which is the default branch. origin defines the name of the remote project while main or master is the default remote branch.

Lets us now use an example to demonstrate how the git push origin master command works in git environment.

We will also create and add a few files using git add command to later push the changes to the master/main branch. Now we will add some files; text-1.txt and test-A.txt in our branch, commit them before we push  the changes into the origin master

The push was a success as shown in the output. All changes committed in our local repo has been added to the original remote project master branch.

WARNING:
You should avoid using --force with git push as it will overwrite the changes on remote branch by any other user working on the same branch. Unless you are the only one working on the branch and you know what you are doing, I would not recommend using this option.

Now it is always a good idea that in such cases user performs a rebase before pushing any changes to the remote repository to avoid any conflicts. We will do some changes and push to remote repo using alisha user:

But user deepak also tries to push some commits without performing a fresh pull:

As expected the push was rejected because there are pending changes from alisha which must be pulled from the remote repository before pushing the new changes. But user deepak decides to ignore this warning message and performs a force push:

So the push was successful but now with this the changes from alisha are overwritten on the remote branch.

Following are the commit logs from user deepak's session:

While following are the commit logs from alisha's session:

Now let us perform a rebase on alisha's workstation, you can notice the output which says there was a forced update where commit f96aa4b was overwritten by 681a969 commit id:

Verify the commit logs, as you case see the commit ID f96aa4b has been deleted due to the force push:

Let us continue our previous example to also understand git push --force-with-lease option. We have again made some changes using alisha user and pushed to remote repository of new-feature branch:

Now deepak will not pull these recent changes and continue to push some more changes for the same new-feature branch using --force-with-lease:

As you can see even though the push was rejected but now the output is different compared to --force. Here now git is not complaining to perform a git pull.

Now we can trick the git to assume that we have pulled the changes by using git fetch which will only fetch the remote refs and tags without merging the latest changes from alisha user available on remote repo.

So the git fetch has successfully fetched all the refs and tags from the repositories for new-feature branch. Now let's re-try git push using --force-with-lease option:

So our git push was successful even without rebasing our local workstation branch with the remote repository.

Git tags help to point out important events of the repository such as release points. Git uses the git tag <tag name> –a command to create tags. –a stands for annotation. This type of git tag with an –a is called the annotated tag. On the other hand git tag <tag name > command without –a is known as the lightweight tag. Annotated tags in git are recognized as full objects and are kept in the database whereas the lightweight tags act as pointers to identified commits in a repo.

In this section, we are going to demonstrate how to create lightweight tags and then push them to the origin master.

Next, run the git tag command to view all the tags as follows;

From the output, we created our first tag v2.0. Running the git tag command displays all the tags in our active branch.

Next, we will push our tags to the remote origin master as follows; 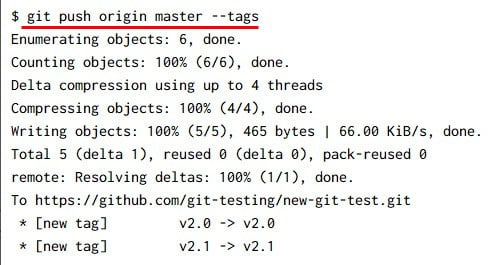 We now have the tags pushed to remote as you can see from the output.

In this section, we will demonstrate how to delete a remote tag using git push.

Understand that deleting a tag from a local repo doesn’t erase the same tag from the remote repo.

The process has to take place separately and below is a demonstration of how to delete the same tag v2.0 from the remote repository.

Note that there's a warning for deleting the tag without a reference. The reason is that we deleted a lightweight tag thus unreferenced in the database. If we had an annotated tag with an –a, it would be referenced.

ALSO READ:
Git delete branch – Are you doing it correctly?

It is possible to use git push command to delete a remote branch. Let’s illustrated that using an example as shown below:

Let’s delete our feature branch in our local repository new-git-test as follows;

We have covered the following important aspects for working with git push: