Getting started with git remove commit

There are many ways to achieve git remove commit. You can pick the best solution depending on the challenge you are facing. For instance, do you want to remove

where N is the number of commits from the head

Navigate to the folder hosting the repo and delete .git subdirectory

The challenging part about understanding git remove commits lies in having inadequate knowledge of git workflow, the reset command and branching. Here is what you should know about the three things.

Basic git workflow entails the working directory, the index and commit history. You only interact with workflow when tracking file changes. Otherwise, your project's files and folders reside in the untracked parent directory.

to the parent folder takes a snapshot of the files to the index, also called the staging area.

From there, you can permanently store the changes in the git database using unique hashes called commit or history. The latest commit in the history or the one you view intending to modify is called the HEAD.

You can undo git changes at the three levels:

Since we start interacting with commit hashes past the staging area, most git remove commit actions will touch the HEAD or commit hash. The most typical commands to use then are git reset and git revert.

Reset is the most familiar command to git remove commit. It occurs in three states: hard, soft and mixed. Git reset soft alters the HEAD commit, while git reset mixed unstages a file. Git reset hard entirely removes a commit from the history and deletes the associated files in the working directory.

Since deleting a commit history may cause conflict between local (not pushed) and remote (pushed) repos, it would be best to use the revert command instead of git reset to undo changes you plan to push.

Other times you want to git remove commits in a different branch. A branch is a single development line. The initial branch is often referred to as the master or main.

Several developers, working on various features of the same project, can create branches, handle tasks in the branches and merge the changes back to the main branch.

While modifying the branches, the developers do commits, most of which you (as the main branch manager) are not interested in.

So, you want the commits removed at the branch level. Git rebase or merge can help restructure the history, as you will see in the practical part of this tutorial.

I am creating a repo called git_remove_commit on Github.

Copy the URL, clone it on the command line and cd into the repo.

We have one commit created from Github by adding the README.md file.

Add two commits in the history.

shows we have three commits to practice git remove commit from branch, last commit, or a bunch of commits. 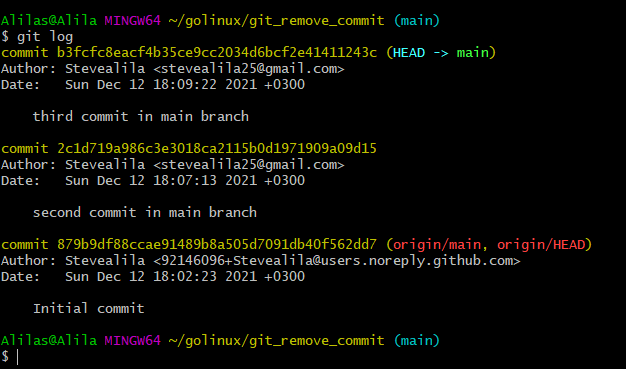 Git remove the last commit by resetting the HEAD

It is simple to remove the last commit in history. You can reset HEAD by running the command

The caret ^ after HEAD implies the last commit referencing the HEAD. 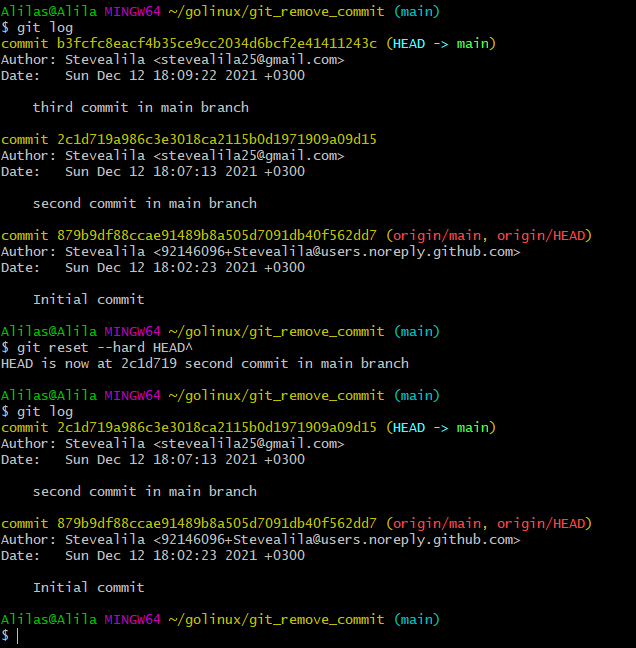 We can git remove commit through interactive rebase or by squashing it.

Let us create and checkout a branch called rebased

We have three new commits. Let us check out the main branch.

We lack the rebased branch's commits

Let us update the changes in the main branch by rebasing the rebased branch.

We can remove the last three commits by interactively rebasing them.

Our default text editor opens up.

Change the first two (from the bottom) pick with squash options. 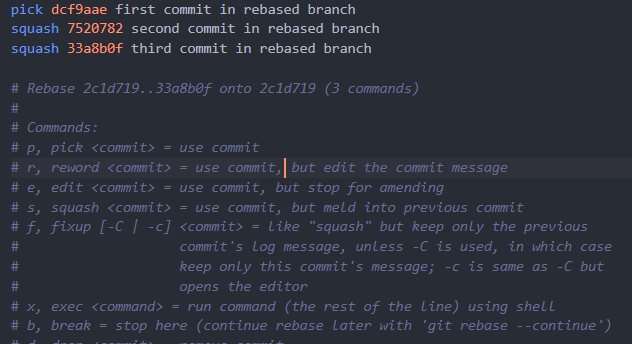 Then close the text editor.

The text editor reopens, asking for a commit message.

I am commenting out the available messages and supplying it the message, "from rebased branch" 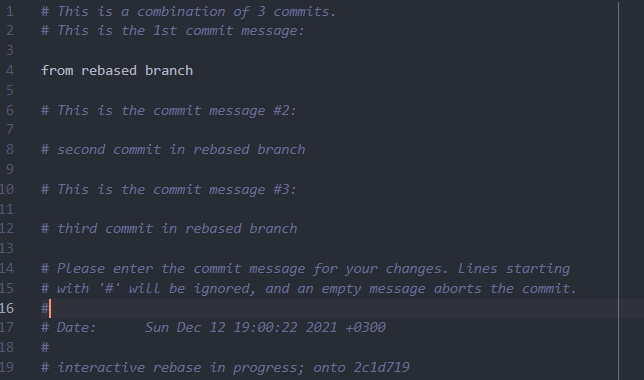 shows our git remove commits mission on the three commits was successful, and we now have a new commit. 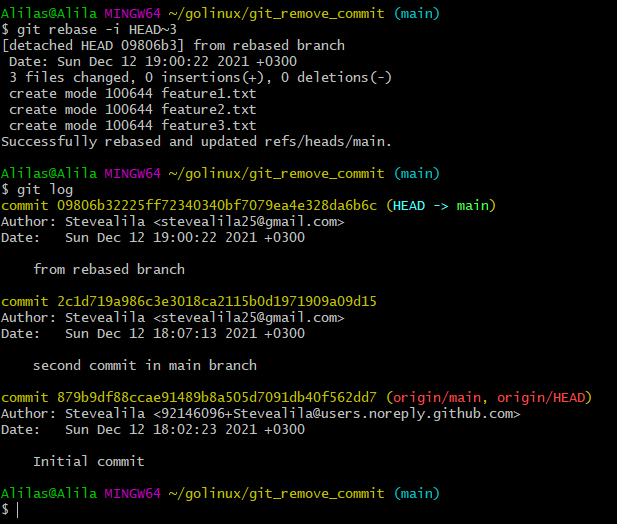 You are free to delete the last commit from git remove from a branch before push section or proceed with it.

Let us git remove commit from branch after push by switching to rebased branch, then push the branch's three commits to create a branch in the remote.

We will then push changes before merging the branch on the command line.

Check remote and compare & pull request the changes until the commits are reflected below.

Check out the main branch and merge the rebased branch.

Edit the commit message, then push the changes with the -f flag

You can read more about squashing commits here.

Git remove commit from branch by clearing the history

Lastly, you may want to remove the only commit you have or git remove the first commit in the history. Either way, the following commands will serve you.

clears all the commits and takes the changes to the staging area. 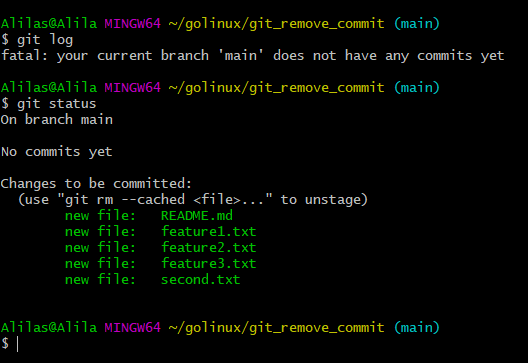 Let us commit the changes before clearing the repo. 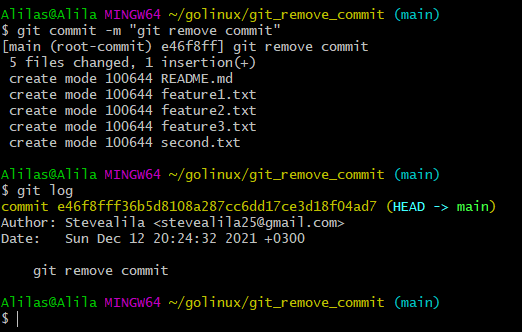 Move to the parent directory, and git remove the commits by deleting the .git sub-directory. 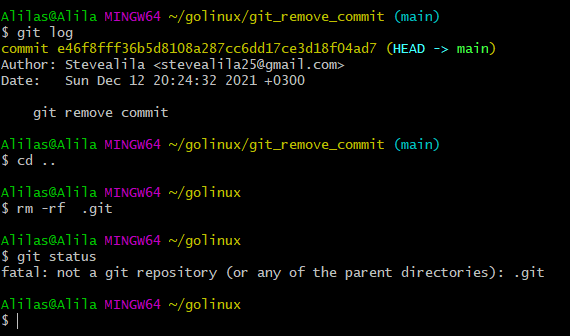 confirms we removed the repo with all the commits!

You can git remove commit by resetting the head, squashing the commits on a branch, or clearing the commit history. However, you should understand the working tree, reset, and branching before that.

Use the following commands to remove target commit(s) respectively: