Finding a quick solution to typical issues in git remove file from tracking will boost your software management experience. It enables you to comfortably wipe off push and pull request problems.

If you want to ignore a tracked file without deleting it, run this command on the command line:

Assume you commit a file that you were to ignore and later reference the file in the .gitignore file. You add the changes to the staging area and commit them. However, the files keep appearing under tracked files.

The most straightforward steps to clear such errors include committing pending code changes then running this command:

Other times you work on a file with other software engineers. You want to git remove the file from tracking without deleting it without interfering with your teammates who track the file.

The best command to use in the circumstance is

If you are sure you will not change the file frequently.

Lastly, you may want to untrack a folder with many files. The recommended command to use is

Let us navigate to the following sections of this tutorial to understand the four standard issue-tracking environments and associated challenges.

I am creating a remote repo called remove_from_tracking on Github. 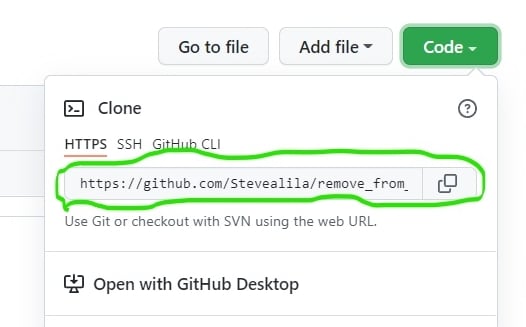 Head over to the terminal or command line and clone the repo into a local directory called golinux.

cd into the cloned repo, remove_from_tracking.

Now that the lab setup is complete, you are ready to learn file untracking by following simple steps.

Example-1: git remove file from tracking without deleting it

Let us continue building the repo in readiness for file tracking.

Currently, only one file, README.md, gets tracked.

shows the two files are untracked.

Let us stage the untracked files

and commit them by entering the following commands on the command line or terminal.

shows we are tracking the three files, README.md, file1.txt, and file2.txt.

Assume we decide to untrack file2.txt. We can git remove the file from tracking by running the command:

Using the --cached flag removes the target files from the staging area, without affecting the files in the working directory.

To confirm that git rm --cached <file> command does not alter the working area, open the file using a code editor or list the files and directories using the command

You are probably wondering, "How can I do git remove a file from tracking and delete it from the working area as well?"

Here is the command to untrack and delete a file from the working directory:

Let us apply it.

to stage file2.txt file again, then commit it by running

to confirm that we are tracking file2.txt again.

Remove the file from tracking using this short command

on your command line.

removes files from tracking and deletes them from the working area.

Sometimes you stage, commit and push a file to a remote repo then realize it was necessary to ignore a file before pushing the changes. You decide to create a .gitignore file and reference your target file in it, but you still face particular challenges, as you are about to see below.

ALSO READ: A practical guide to git reset hard vs soft vs mixed

So far, we are tracking two files, README.md and file1.txt.

Create a test.py file and append a new line to it.

git add ., git commit -m " password tracked accidentally" and git push it to the remote repo you created at the beginning of this tutorial.

Let us do a git remove file from tracking by creating a .gitignore file and referencing the test.py file in it.

We expected the test.py to be removed from of the tracking zone because we now ignore it, but it did not disappear from tracked files.

Let us remove it from the tracking space

and check the changes.

test.py is out of the tracked files, but still referenced in .gitignore.

Knowing how to ignore tracked files helps secure files promptly. What if you want to git remove file from tracking without stopping your teammates from tracking its changes? Let us take a look at that scenario.

Example-3: Remove file from tracking from all git pull requests

We can untrack a file on every pull request while letting other engineers continue tracking it by doing the following.

Assume we want to untrack the README.md. We can run this command:

if we don't alter the file or it takes up massive storage space.

Now we won't track the file on subsequent pull requests.

Return to the terminal or command line and create a folder, html_files.

cd into the html_files folder and add two files, index.html, and about.html.

Navigate into the parent folder, remove_from_tracking.

shows we are now tracking index.html and about.html.

We later realize we won't work with HTML. We, therefore, want to untrack index.html and about.html then deleted them.

We can untrack the folder by running this one-line command:

Remember to put a slash \ before the star * to escape from the git commit command. Our files are now untracked and rest on the hard drive.

Understanding and applying git remove file from tracking will boost your personal experience and ease team interactions when handling files. Now that you know why, when, and how to remove files from tracking, go ahead and enjoy your file tracking workflows.