Knowing how to do git remove untracked files using various commands can save you a ton of development and build time.

to remove both untracked files and directories from git.

Set up a lab environment

We will build everything from scratch to make this tutorial as friendly as possible.

I am creating a remote repo called git_remove_untracked on Github.

Then clone it into a local directory called golinux.

It would help to understand some common terms used during git remove untracked files to ease discarding the target files. These are untracked vs tracked and unignored vs ignored files.

Here is an example.

cd into the new directory and create file1.txt by running the command

At this point, we have not authorized git to track our files. Let us do that.

to start tracking files in the git_remove_untracked directory.

reveals that file1.txt is untracked.

Ignored files appear in the .gitinore file. Contents of the .gitignore file are mainly sensitive documents.

Think about the sensitive JWT or .env files.

You don't want git to track such files, and neither do you want to publicly expose them when you push your files to a remote repo. You can also ignore massive directories like node_modules making your app heavy if pushed to production.

Let us create a .gitignore file to demonstrate the concept of ignored vs unignored files.

to see even hidden directories and files.

create file2.txt and reference it in the .gitignore file.

file1.txt is unignored whereas file2.txt is ignored. Ignored files are untracked by default.

to confirm git does not list file2.txt under untracked files despite having created it.

Understanding tracked, untracked, ignored, and unignored files let you understand the impact of doing git remove untracked files on your repo, as you are about to see in the following sections of the article.

We have built a bunch of untracked files. Return to the main directory, git_remove_untracked and run

to view all the untracked files.

Without conducting git remove untracked files, you can use the

command to remove a single untracked file from git.

Let us do exactly that on file1.txt.

Although we have accomplished the primary mission of removing untracked files, imagine the tediousness we would undergo if we were to discard a thousand files, removing a file at a time. You are probably thinking, "but I can use rm -rf to clear a giant file promptly."

Although you can chop off unwanted directories quickly using the

command, the method is unreliable in a typical software development environment due to files dependability. Completely deleting a directory can result in your app crashing.

That is where git clean comes in. It saves us time while avoiding errors frequently encountered during untracked files removal.

Let us see the power of git clean by analyzing various circumstances to apply it.

Let us (re) introduce the deleted file1.txt and an HTML file to the list of our untracked files.

shows our files are untracked.

Create another file, add and commit it as follows: 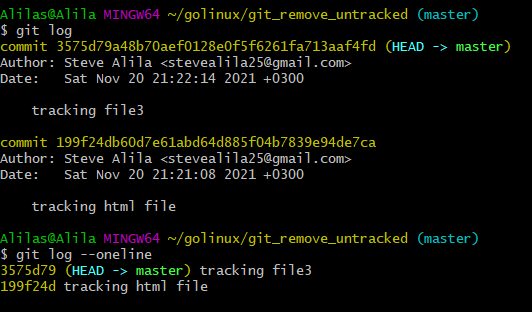 Let's git reset the head to the initial commit by running

One commit got discarded from history!

However, the git reset command did not tamper with our untracked files.

Having several untracked files leads to an untidy repo. The development and deployment processes become error-prone, especially at the build or git push stages.

to see all untracked files to be deleted.

to see all (untracked) directories to be deleted.

We can initiate git remove untracked files by running

to remove an untracked git file

The long form of the command is

file1.txt and .gitignore files got removed.

Although we did not expect any untracked file leftovers, file2.txt got returned despite cleaning git untracked files. That happens because it was initially untracked since it was an unignored file.

Now that its shield (.gitignore file) got removed, it resurfaces because git reset did not delete it. Additionally, the clean -f command does not affect ignored files directly (check example 3 for solution).

Now that we do not have untracked files, we can push the changes to our remote repo by running

Another way to remove untracked files from git is to run the git clean command with the interactive flag.

ALSO READ: Git merge vs rebase and the problems they solve

to include or exclude files to be affected.

The command line prompts us to pick an appropriate command. If we choose 1, clean, the files get removed, as shown in this screenshot.

shows we have removed all untracked files.

Let us introduce the .gitignore and file4.txt files to use for practice.

Make file4.txt an ignored file by referencing it in the .gitignore file.

does not remove the ignored untracked files in one step, we need to run

to remove the files. Remember to capitalize the X. Let us do that right away.

to remove ignored and unignored files. Here, x should be in small letters.