Git restore is frequently confused with other commands such as checkout, revert, reset, and switch. The reason being it came into existence when some of the commands were already solving its primary roles.

Also, some of its features could be undergoing the experimental stage, making it hectic to realize the best way to apply it. The four stable forms of the git restore command are

to undo changes in the staging area,

to restore changes in both the staging area and the working tree. Use

to restore changes along a branch, tag, or on a commit hash, and

It would help to take a realistic look at the four git restore flags and their alternatives. But, before that, you should understand the terms often confused with git restore.

The role of git restore in a standard git workflow

Although git restore can discard changes in the working tree, it mainly affects the index. The index also called the staging area, is the second level of the main git workflow. The first stage is the working tree, where you introduce new files or modify the ones already in the index or history.

After creating the files, you store them in the git database after keeping a copy of the changes in the index. On committing the changes, they become part of the history and are identifiable with a commit hash.

Depending on the number of developers collaborating on a project, you may open and merge several branches.

Transitioning from one development line to another may require undoing, discarding, or reinstating deleted changes. That calls for using various commands such as git restore.

Git checkout, switch, reset, and revert often get confused with git restore. Here's what you should know about the commands.

Git checkout used to be one of the most overworked commands before launching git version 2.23. It undoes changes in a file or a commit and switch between branches. Now, git recommends using the git restore command for most git discard change processes.

You can also use the git switch command to navigate branches by creating and checking out a branch using a one-line command.

The reset command returns the HEAD to a specified state. More often, git reset updates a branch and often overlaps with git restore. On the other hand, git restore does not update a branch and mainly affects files in the working tree.

Let us set up a lab and see the differences practically.

Set up a lab to explore the git restore command

I am creating a repository on GitHub called git_restore,

Copy its URL and clone it on the command line.

Let us create a file.

Now that we have a repository to play with, let us see practical examples of the git restore command.

Although git checkout can still help undo changes in a file, commit or tag, its primary usage after introducing git version 2.23 is switching between branches. Here is an example:

I am creating and moving into new_branch.

or create and checkout a branch using the -b flag.

The hard reset command helps to discard changes. For example, let us remove the last commit.

And hard reset it.

Rechecking the file, we realize it got deleted from the working directory. Neither can we trace its commit from history. 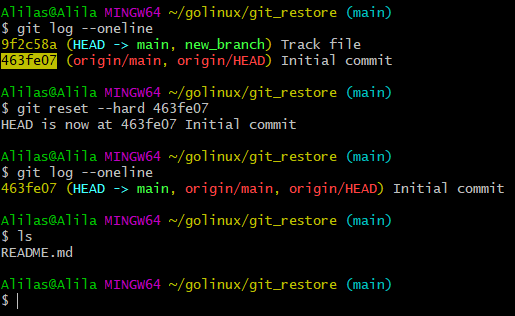 We can restore the file using  reflog and a hard reset on the discarded commit.

The file is back to the working tree. A soft reset changes the commit HEAD by removing the changes from the history to the index. Lastly, a mixed reset on the HEAD unstages the file. As you will see in example-1, it works in a similar manner as git restore --staged <file>.

Let us use it to unstage file2 as follows:

Since the (hard) reset command is destructive, you should avoid it when undoing changes on files you have pushed. Instead, use git revert.

Let us restage file2, commit and push it.

We can then revert the changes as follows: 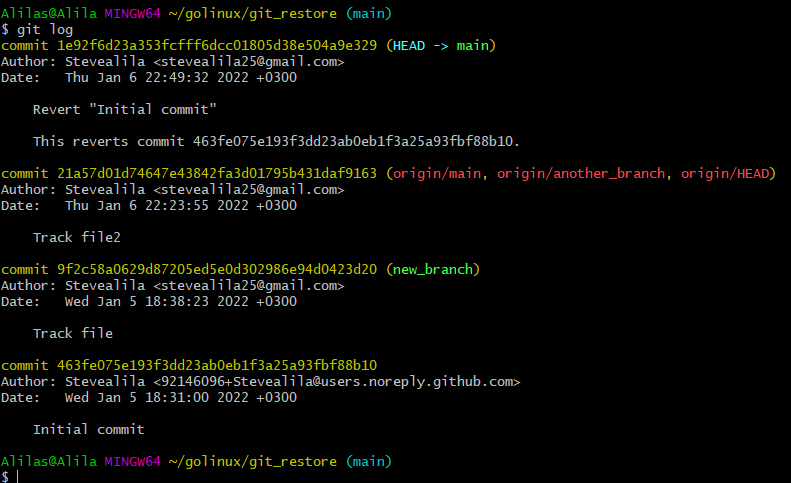 Lastly, we can use the git switch to check out branch_b.

Let us now use three examples to explore the git restore command practically.

The changes are untracked and marked in red. Let us stage the changes and recheck the status.

The files are green, meaning they are staged. As git hints in the below screenshot, we can unstage the changes by specifying file2 in the git restore command.

And recheck the status.

Our files are back in the working directory. 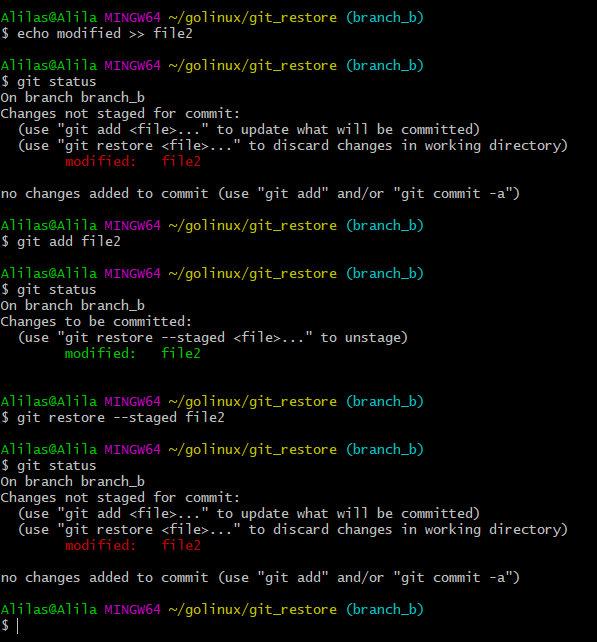 We can also restore changes in the index and the working tree.

Restore the index and working tree.

Both changes got wiped out.

Modify file2 and check out the main branch.

Restore the file by specifying the branch name and file.

Return to branch_b and check the status. 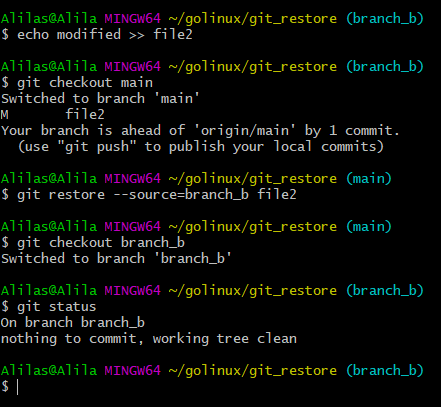 We can interactively restore the modified changes using the --patch flag.

Check out the main branch.

Modify the file and check the status.

asks us to pick the restore option. Let us go with y for yes. Our changes got restored. 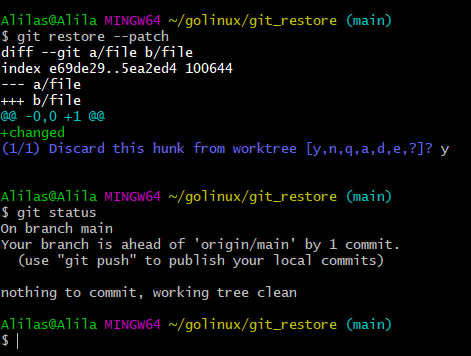 Git restore's role changes according to the flag supplied. For example, the --staged flag works as a mixed reset on the HEAD, The --staged --worktree and --patch flags discard files from the working directory, just like git reset hard on a commit.

Git checkout can undo changes on a file, tag, or commit. After introducing the restore command in git 2.23, the checkout command, like the git switch, mainly helps in navigating branches. Finally, git revert is a safer path to undo changes on commits already pushed.