Go methods are basically functions with receiver arguments between the func keyword and the name of the method. The receiver does appear in its own argument list. Go uses receivers to implement object orientation just like other languages do like python and Java where classes are used to achieve object orientation. Go does not have classes, but you can define methods on different types like struct, and non-struct types.

The unique thing about the above syntax is that the receiver type  appears in its argument list. The receiver type declares the type the function is going to be attached to. One important thing to note is that the method and the receiver have to be in the same package. This means that Go does not allow us to declare a method and receiver whose type is defined in another package and this rule applies to built in types such as int and string.

The following figure highlights the different parts involved in defining a method. It shows the quart method attached to the type gallon based receiver via the g gallon receiver parameter: 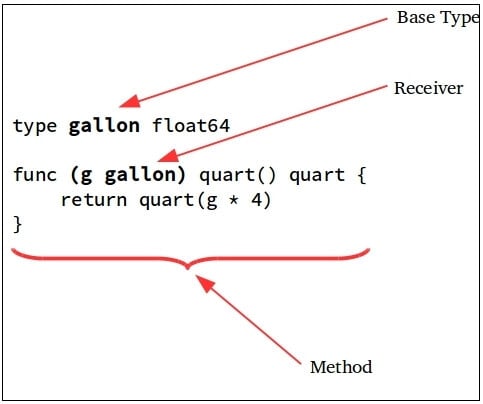 In Go, you can define a method whose receiver is a struct or a non-struct type. For most of the examples in this article, structs will be used to demonstrate methods in Go. If you haven't already, install Go runtime, and create a working directory and add main.go file in your working directory to start writing Go methods.

In the preceding example, we defined methods with struct types. It is possible to define methods with other types that are not struct types. One important thing to note though is that when defining a method on a type, the definition of the receiver type and of the method should be in the same package.

In this example, we are trying to mimic request response client server architecture. We first declare a URL string type at the top.Then we define a Protocol interface with two methods namely request()and response() . At this point, if we have a type with these methods defined, that type will implement our Protocol interface implicitly. Then we define a HTTPProtocol struct type with request()  and response() methods. The request() method has a pointer receiver, and that allows us to modify the URL attribute of the HTTPProtocol struct. We also assign the URL string type variable to the new URL. In the main function, we create an instance of the HTTPProtocol struct (HTTPP) with a URL string. We then use the request() method to pass the URL endpoint(“go-methods”), which goes ahead to effect the changes both on the URL variable and the URL attribute of the HTTPProtocol instance.

Go methods can accept both value and pointer receivers. In our previous example we used value receivers, in this section , we will work with both. A pointer in Go is a variable used to store the memory address of another variable, in this case we will use a pointer as a receiver. Go always passes by value , which means it creates a copy of the value in the function. If you call a method with a value receiver, and the method modifies that value, the caller will not see that modification made to the value. If you want to modify the value, the receiver has to be a pointer. In simple terms, we use pointer receivers in methods to modify the value the receiver points to and to avoid copying the value on each method call.

ALSO READ: How to do https request with bad certificate? [SOLVED]

In this tutorial,  we have learned about what methods are and what is the difference between a method and a function. We have also dived deep into the relationship between methods, receivers and interfaces. Go methods and interfaces are important features of Go that every Go developer should have at their fingertips.