In this tutorial I will share different methods and tools to detect and find memory leaks with different processes in Linux. As a developer we often face scenarios when proess such as httpd apache, java starts consuming high amount of memory leading to OOM (Out Of memory) situations.

So it is always healthy to keep monitoring the memory usage of critical process. I work for an application which is memory intensive so it is my job to make sure other processes are not eating up the memory unnecessarily. In this process I use different tools in real time environments to detect memory leaks and then report it to the responsible developers.

What is Memory Leak?

Before you go ahead I would recommend you to also read about Linux memory management so that you are familiar with the different terminologies used in Linux kernel in terms of memory.

I have downloaded and extracted memwatch on my Linux server as you can check in the screenshot: 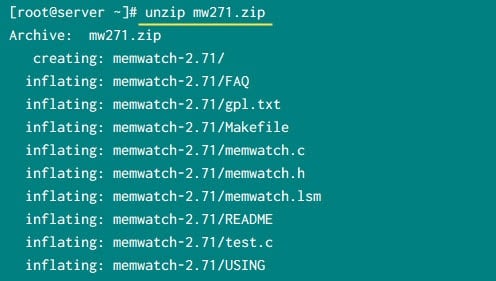 Next before we compile the software, we must comment the below line from test.c which is a part of memwatch archive.

Next compile the software:

HINT:
Make sure you have all the compiling software installed on your Linux server such as gcc, make etc

Next we will create a dummy C program memory.c and add the memwatch.h include on line 3 so that MEMWATCH can be enabled. Also, two compile-time flags -DMEMWATCH and -DMW_STDIO need to be added to the compile statement for each source file in the program.

The code shown in allocates two 512-byte blocks of memory (lines 10 and 11), and then the pointer to the first block is set to the second block (line 13). As a result, the address of the second block is lost, and a memory leak occurs.

Now compile the memwatch.c file, which is part of the MEMWATCH package with the sample source code (memory1.c). The following is a sample makefile for building memory1.c. memory1 is the executable produced by this makefile:

MEMWATCH creates a log called memwatch.log. as you can see below, which is created by running the memory1 program.

MEMWATCH tells you which line has the problem. For a free of an already freed pointer, it identifies that condition. The same goes for unfreed memory. The section at the end of the log displays statistics, including how much memory was leaked, how much was used, and the total amount allocated.

In the above figure you can see that the memory management errors occur on line 15, which shows that there is a double free of memory. The next error is a memory leak of 512 bytes, and that memory is allocated in line 11.

Valgrind can detect problems such as:

Next you can execute valgrind with the process for which you wish to check for memory leak. For example I wish to check memory leak for amsHelper process which is executed with -f option. Press Ctrl+C to stop monitoring

To save the output to a log file and to collect more details on the leak use --leak-check-full along with --log-file=/path/og/log/file. Press Ctrl+C to stop monitoring

Now you can check the content of /tmp/mem-leak-amsHelper.log. When it finds a problem, the Valgrind output has the following format:

ALSO READ: How to enable persistent logging in systemd-journald without reboot

One of the drawbacks of Valgrind is that you cannot check memory leak of an existing process which is where memleax comes for the rescue. I have had instances where the memory leak was very sporadic for amsHelper process so at times when I see this process reserving memory I wanted to debug that specific PID instead of creating a new one for analysis.

memleax debugs memory leak of a running process by attaching it. It hooks the target process's invocation of memory allocation and free, and reports the memory blocks which live long enough as memory leak, in real time. The default expire threshold is 10 seconds, however you should always set it by -e option according to your scenarios.

Now since I have installed both the dependencies, I will go ahead and install memleax rpm:

Next you need the PID of the process which you wish to monitor. You can get the PID of your process from ps -ef output

You may get output similar to above in case of a memory leak in the application process. Press Ctrl+C to stop monitoring

It helps for the developer at times we can share the core dump of the process which is leaking memory. In Red Hat/CentOS you can collect core dump using abrt and abrt-addon-ccpp
Before you start make sure the system is set up to generate application cores by removing the core limits:

Next install these rpms in your environment

Ensure the ccpp hooks are installed:

Ensure that this service is up and the ccpp hook to capture core dumps is enabled:

To get a list of crashes on the command line, issue the following command:

But since there are no crash the output would be empty. Next get the PID for which you wish to collect core dump, here for example I will collect for PID 45256

Next we have to send SIGABRT i.e. -6 kill signal to this PID to generate the core dump

Next you can check the list of available dumps, now you can see a new entry for this PID. This dump will contain all the information required to analyse the leak for this process

We discussed about third party tools which can be used to detect memory leak with more information in the code which can help the developer analyse and fix the bug. But if our requirement is just to look out for process which is reserving memory for no reason then we will have to rely on system tools such as sar, vmstat, pmap, meminfo etc

So let's learn about using these tools to identify a possible memory leak scenario. Before you start you must be familiar with below areas

If you have answers to above questions then it will be easier to analyse the problem.

For example in my case I know the memory usage of amsHelper should not be more than few MB but in case of memory leak the memory reservation goes way higher than few MB. if you have read my earlier article where I explained different tools to check actual memory usage, you would know that Pss gives us an actual idea of the memory consumed by the process.

Alternatively you can get the same information with more details using smaps of the respective process. Here I have written a small script to combine the memory and get the total but you can also remove the pipe and break down the command to get more details

So you can put a cron job or create a daemon to timely monitor the memory consumption of your application using these tools to figure out if they are consuming too much memory over time.

In this tutorial I shared different commands, tools and methods to detect and monitor memory leak across different types of applications such as C or C++ programs, Linux applications etc. The selection of tools would vary based on your requirement. There are many other tools such as YAMD, Electric fence, gdb core dump etc which can help you capture memory leak.

Lastly I hope the steps from the article to check and monitor memory leak on Linux was helpful. So, let me know your suggestions and feedback using the comment section.