Unlike most other operating systems, Linux gives users the ability to customize a distribution to their liking. For example, Kali Linux and Parrot are the most popular Linux distributions used in penetration testing and security auditing. However, that doesn't mean you can't use another Linux distribution for penetration testing. All you need is to find a way to install all the security tools in your desired distribution.  Unfortunately, the whole process of installing all these tools one by one sometimes gets complicated and time-consuming since Kali Linux has more than 300 pentesting tools. In this case, Katoolin comes quite in handy.

Katoolin is a free, open-source python script developed by Lionsec to install all Kali Linux apps at once or manually one by one in all Linux distributions of your choice. This post will give you a step-by-step guide on installing Kali Linux on Ubuntu 20.04 LTS using Katoolin.

To successfully install Kali Linux apps on Ubuntu, we will need to meet the requirements below.

In most recent Linux distributions, Git comes installed by default. However, if that's not the case, use the command below to install Git.

After a successful install, use the command below to check the version of Git installed.

Ubuntu 20.04 LTS comes pre-installed with Python 3. Unfortunately, the Katoolin script is written in Python 2. To get started, run any of the commands below.

When done, run the --version command to check the installed version of Python with the command below.

After successfully installing Python2, we can now go ahead and install Katoolin. Execute the command below to clone the Katoolin GitHub repository.

When you run ls command, you should see a new folder with the name "katoolin." To install Katoolin in our Ubuntu system, we will move/copy the katoolin folder script into the /usr/bin directory with the command below.

Make the script executable using the command below.

To start using katoolin, run any of the commands below: 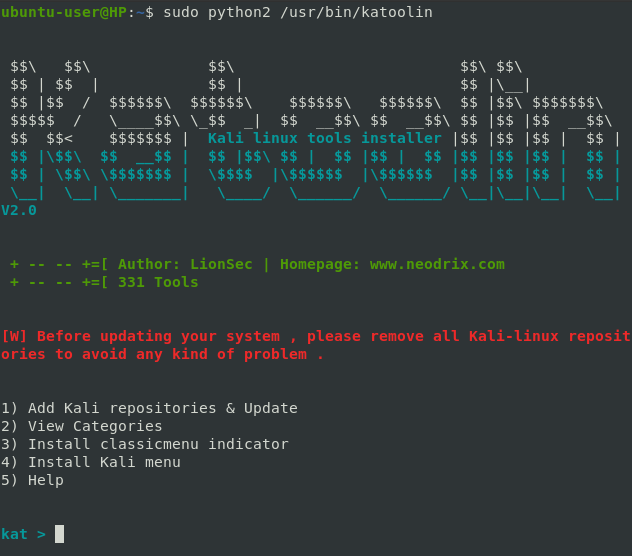 As of writing this article, Katoolin gives you four options to install kali linux apps on Ubuntu:

Linux repositories are storage locations where the system retrieves updates and applications. You will see a prompt, "What do you want to do." 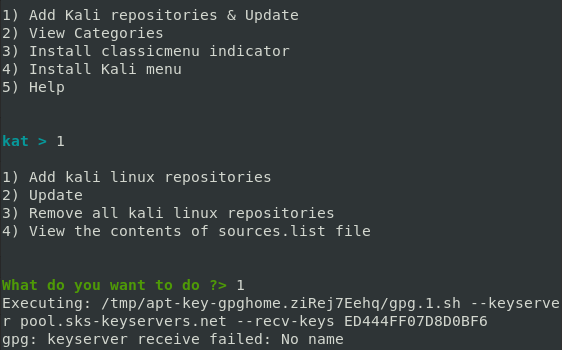 NOTE:
If you get the error gpg: keyserver receive failed: No name, as shown in the image above, don't panic. Press Ctrl + C to close the katoolin interface and execute the command below.

ALSO READ: How to install Rscript on Ubuntu? [SOLVED]

Select option 2, "Update," on the next prompt since we had already added the repositories. 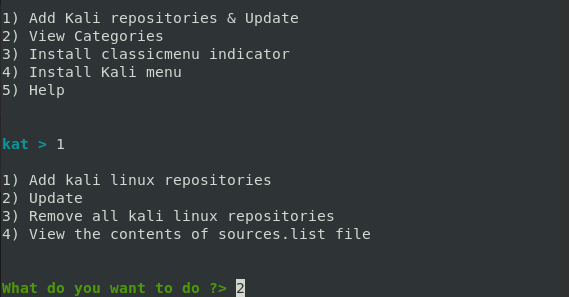 After successfully adding Kali repositories to your system, we can now start installing the various security tools. Enter "2"  to select the "View Categories" option.

You will see a list of all the various security tools categories available. If you have used Kali Linux before, you will realize these categories are arranged just as they appear on the Kali Linux application menu. If you want to install all the tools in their various categories, enter zero (0). To install tools in a particular category, enter the option of that category.

For example, in this post, we will install "Information Gathering" tools. We will press one (1) and hit enter. That will open a whole new list of all the information-gathering tools available for install. To install all the tools in this category, press zero (0). To install only a single tool, press the tool number. In our case, we will install Nmap. Therefore, we will press 18 and hit enter.

ALSO READ: How to install Pyrit in Kali Linux [100% Working]

You can use this method to install any Kali Linux tool in your system or all of them if you wish. Once done, type "gohome" to go back to the main interfaces window.

The classic menu indicator is an indicator applet for the Ubuntu Desktop environment. It's a reliable notification applet that sits on your Ubuntu notification bar. On the katoolin main interfaces, type 3 and hit enter to install the Classic Menu indicator. The menu will appear at the top of the window, as shown in the image below. 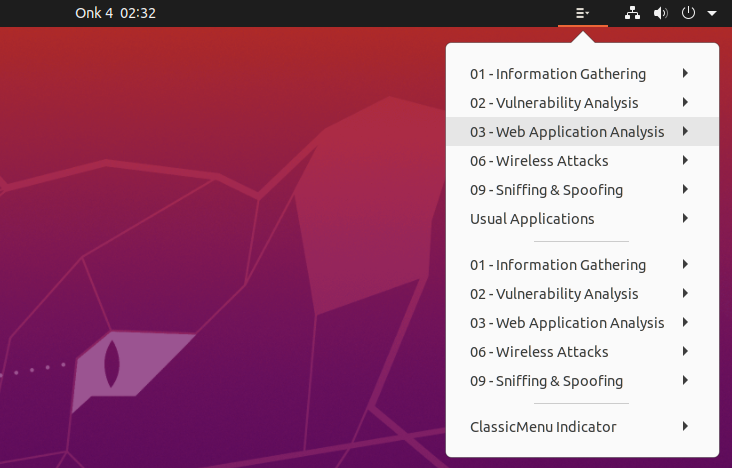 That's it! I believe by now; you can easily install Kali Linux apps on Ubuntu system. Luckily the procedure in this post can be replicated on any other Debian-based Linux distribution. If you found this post helpful, please share the love by sharing it with friends on your social platforms.