What are NFT (Non-Fungible Token)?

DEFINITION A fungible token (FT) is identical to every other token in value for the same class of tokens. One FT is equally exchangeable with any other within the given class.

DEFINITION A non-fungible token (NFT) is a unique token within given token class. An NFT is not equal to any other NFT within the given class.

If you are into blockchain and cryptocurrency then you may be wondering what NFTs are. NFTs stands for Non-Fungible Tokens. Non-Fungible Tokens are a type of non-fungible token. These are essentially digital certifications of ownership and authenticity. With an NFT, the creators use blockchain to turn virtual commodities into one-of-a-kind, forgery-proof collector's items—a digital certificate of authenticity. This gives the work a value that no arbitrarily replicated content can match. The word "non-fungible" means "unique."

What is a token?

A token is a representation of an asset in digital form. The token has a value or performs a specific function. Real assets, like real estate or music rights, can be tokenized at the same time by overwriting the token's associated rights and responsibilities. This means that the ownership structure is digitally mapped and hence tradeable.

A token might be fungible (exchangeable) or non-fungible (not exchangeable). In this context, "non-exchangeable" simply indicates that it is a one-of-a-kind digital object that cannot be traded for another.

How do NFTs work?

Now that we learned what NFTs are, let's see how they work. The term NFT is derived from the concept of information blocks organized in a blockchain. Each block contains information about itself and the block in front of it, with the value of an item corresponding to a digital fingerprint. The so-called "hash value" uniqueness may be utilized to identify each block.

In theory, NFT may refer to nearly anything, from digital works of art to gaming goods, trading cards, and music, as well as the above-mentioned meme. What matters with an NFT is the exclusivity you purchase. In theory, you have a one-of-a-kind record on the blockchain that is tied to the product.

What are the methods for proving ownership?

Simply said, this is made up of data chunks that are linked together like links in a chain. Each block, in turn, includes data as well as its own and the preceding block's hash value. The transaction details of cryptocurrencies or NFTs, for example, can be kept in a block, as can the seller, buyer, and transaction amount.

It's possible to think of the hash value as an electronic fingerprint. It's always different and is used to identify the block. A chain (blockchain) is formed because each block additionally carries the hash value of its predecessor. This is built on an equal-rights network of computers, each of which has a complete copy of the blockchain. If a new information block is formed, it is received by all computers in the network, which is compared, and the integration is confirmed. 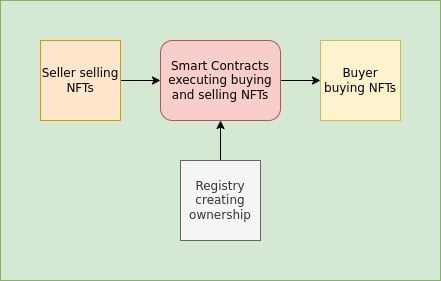 If someone attempted to incorporate a block into the blockchain with inaccurate information, he would have to feed it into all copies of the same. Because this is nearly impossible, the blockchain is an exceptionally secure data storage option.

Individual ownership may be extremely clearly recorded since data can always be traced on a blockchain. An NFT stored on the blockchain, on the other hand, cannot be copied - at least not within the blockchain.

Digital works of art may, of course, be indefinitely replicated with any technological equipment, but they are in no way inferior to real works of art. And, just like a genuine picture, they derive their worth largely from the fact that we attribute it to them.

The only distinction, perhaps, is that a Picasso or Van Gogh painting may be displayed in one's home, but an NFT exists solely in the virtual realm. But, given how much time we now spend in digital realms like Facebook, Instagram, and other social media platforms, the concept of wholly digital belongings shouldn't seem so farfetched.

How to make and sell an NFT?

If you want to make your own NFT work of art, you may simply do it using a trading platform like OpenSea, Rarible, or Wax. The "Create" function may be found in the menu at the top. All you have to do is submit a suitable file, such as a PNG, GIF, WEBP, MP4 or MP3, and it will be turned into an NFT instantly.

The sites allow you to sell your work directly. Please keep in mind that both uploading and selling will necessitate the use of a digital wallet.

Non-fungible Tokens (NFTs) are digital ownership and authenticity certificates. NFTs are forgery-proof, one-of-a-kind collector's treasures. Artists retain complete ownership of the piece, just as they would with a traditional painting. NFT might theoretically relate to anything from digital works of art to gaming products, trading cards, and music. NFT transaction data, such as the seller, buyer, and transaction amount, may all be stored in a block.