NMAP  is an opensource tool used by penetration testers for network security auditing and network discovery. Some of the advantages of using NMAP are;

This is a tool developed by Rapid7 for the purpose of developing and executing exploits against vulnerable systems. It is also instrumental in Intrusion Detection System signature development. It aids the penetration testers in choosing and configuring of exploits. Metasploit is available is two versions; The Metasploit Pro version which has advanced options such as managing social engineering campaigns and the free version which has less but useful options and tools for a pen-tester. You can download Metasploit on its official website here https://www.metasploit.com/download

With that in mind, lets jump right into our guide.

We first need to know the IP address of our target system. We run our Metasploitable and on the terminal we use

command in order to know the IP address of our target system. As shown below, we have our system IP address.

In the screen below, we see the vulnerabilities within our target system. The -O NMAP command is to determine the operating system within which target system is operating on. the -sV option will help us determine the version of the services running on these ports. The system has many open ports as it can be seen in the screenshot below. Each port has a technique or else a way of exploiting its vulnerabilities. 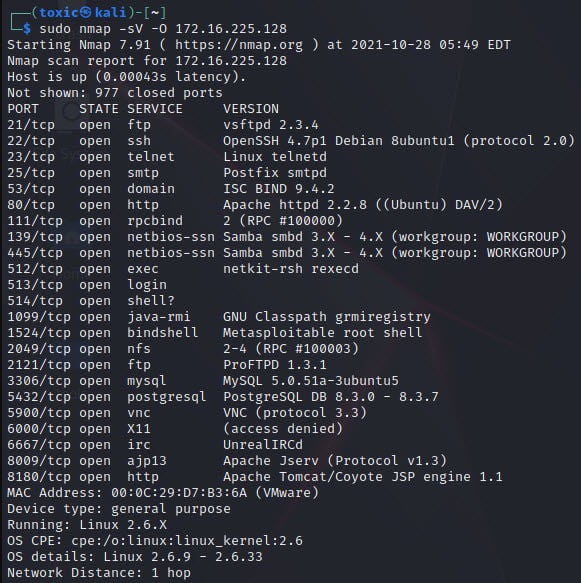 We now have the information we require to exploit the vulnerable system.We will be exploiting some of the vulnerabilities we have just discovered above.

Our first vulnerability to exploit will be FTP which runs on port 21.

We fire up our Metasploit using:

command and search for vulnerability relating to vsftpd. (Metasploit has the known vulnerabilities exploit database hence makes it easier for a pen-tester to load and use the exploit). On searching for exploits related to FTP services, we find an exploit “exploit/unix/ftp/vsftpd_234_backdoor” as shown below.

We now have to use the exploit to attack out target system. We enter command to use the backdoor.

to our target system IP address and run the exploit.

Step-3: Checking privileges from the shell

We get a shell from the target system and we can test by checking which account the shell is on. The shell is running on the system with root privileges as Shown below. From the shell you can access and make changes to our target system.

VNC (Virtual Network Computing) enables a users to control another computer over a network connection. In this attack we will be attacking our target system on port 5900 in order to control it over remotely.

We fire up our Metasploit framework and search for a vulnerability which will enable us to crack the VNC remote login credentials as shown below. using key words "vnc login"

Step-2: Using the found exploit to get VNC password

We have to use "auxiliary/scanner/vnc/vnc_login"

vulnerability and set our remote host or else our target system IP address and run.

On the screen below you can see metasploit was able to crack the VNC login password and it is shown below.

And we have a remote connection to the target system as shown on the screen below. We are able to view what is happening on our target’s screen. We can also be able to control the system and launch different terminals. In short, it is as if you have the system in front of you and can do anything you want to do with it. 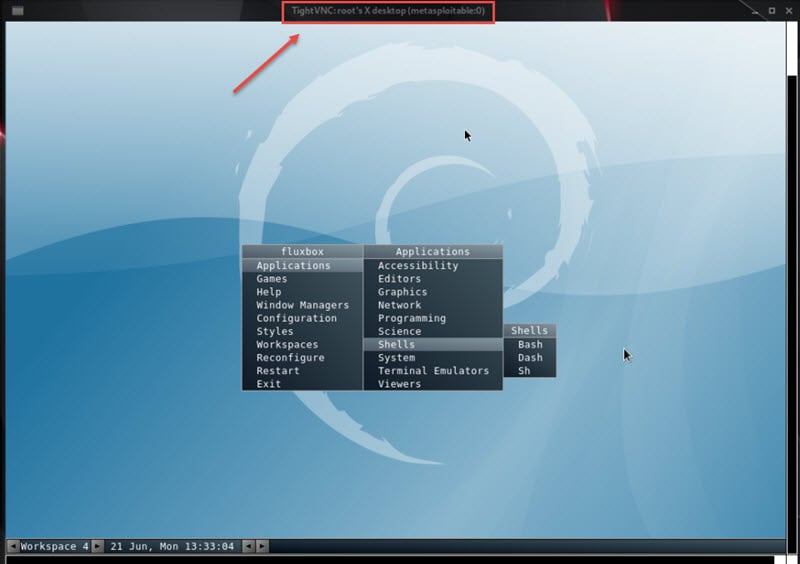 Our last vulnerability is the samba server vulnerability. We will be exploiting this vulnerability on our target machine to gain a TCP shell from which a hacker can be able to perform malicious activity on a vulnerable server since our target system has Samba “username map script” Command Execution.

We will first launch msfconsole and search for an exploit which matches the vulnerability found on metasploit from which we will launch our attack.

As you can see we have our “exploit/multi/samba/usermap_script” vulnerability which we need to launch our attack.

We set to use the script vulnerability, set the target IP address and run the exploit.

We now have a remote shell. We can check our privileges on on the shell established using the command “whoami”

We are in the target system as the “root”