In this tutorial we will learn about Logical Volume Manager i.e. LVM used in Linux and Unix. In the early days of Linux servers, storage was handled by creating partitions on disks. Even if this approach does work, there are some disadvantages, the most important of which is that disks are inflexible. That is why the Logical Volume Manager was introduced. We will learn more about this in this tutorial.

Here is a diagram of LVM architecture where you can see there are multiple layers: 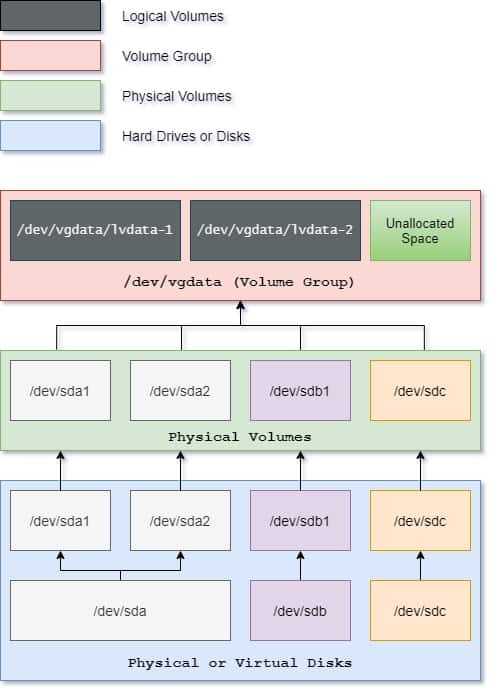 There are several features with LVM which makes it a "must have" solution in production environment.

These are the basic components which make up the Logical Volume Manager:

There are different types of LVM which you can configure in your environment based on your requirement. Let me give you a brief overview on different available types of LVM in Linux and Unix.

This is basic and most used type of LVM wherein the physical volumes are concatenated to create one or more logical volumes. 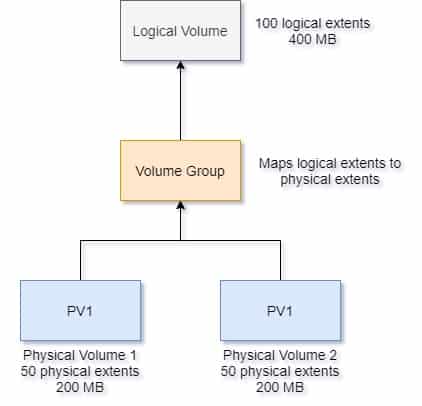 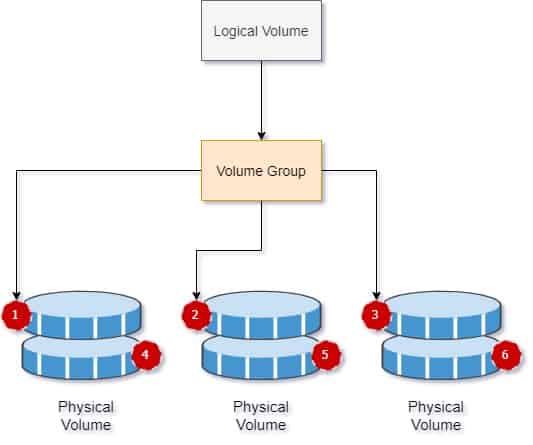 The following illustration shows data being striped across three physical volumes. In this figure:

In a striped logical volume, the size of the stripe cannot exceed the size of an extent. The smallest block of storage that LVM can allocate is an extent

When creating a striped volume, an extent is allocated from each physical volume at each level of the stripe. When there is space left over after allocating the logical volume, there will be a similar amount of space on all the PV's in the raid-set.

For example, if the stripe is across 12 devices and the volume only uses 2.5 extents, half an extent will be spare on 12 devices (total 6 x extent_size).In this example, The logical volume would be rounded-up in size to consume 3 extents on all the devices, and the logical volume size will be increased to match.

Let us take an example to understand how size is allocated in Stripped Logical Volumes, Consider a LVM volume group with the following values:

If we try to create a stripped logical volume of 1 GB with these stats, then:

Firstly, we need to determine how many Physical Extents (PEs) are required for this device:

Figure out how many Physical extents are required on each stripe:

21.333 extents will be rounded up to 22 extents on each volume. Lets calculate the size of the rounded-up volume:

So our 1GB logical volume split across 12 physical volumes with a Physical Extent Size of 4MB will actually become a 1.03 GB volume.

I hope you are familiar with different types of RAID. LVM supports RAID0/1/4/5/6/10. An LVM RAID volume has the following characteristics:

In most cases I would recommend to go for Hardware RAID (or software RAID) instead of using LVM with RAID. You can easily have a HW or SW raid and then create linear LVMs on top of them so that you can utilize all the features of LVM

Here I have consolidated some of the most frequently used Linux LVM commands:

In this tutorial I gave you a brief overview on Logical Volume Manager (LVM) used in Linux and Unix. I also explained the different available types of LVM. Although as of now I skipped the part with the commands required to create these Physical Volumes, Volume Groups and Logical Volumes, I have saved that for the next tutorial as that would just make this post longer. So now you should have an idea of how LVM works and the different components and terminologies involved in LVM.

I have used following external references for this tutorial: