When something goes wrong in the code, Python raises errors and exceptions, which might result in abrupt program termination. With the aid of try-except, Python additionally provides an exception-handling technique. IndexError, ImportError, IOError, ZeroDivisionError, TypeError, and FileNotFoundError are some of the common standard exceptions. These are all the built-in exceptions that come along with python. Studying the built-in exceptions is not in the scope of this article.

We will focus on the custom exceptions in Python.

Exceptions must be directly or indirectly descended from the Exception class. Even though it's not required, most exceptions have names that finish in "Error," just like Python's default exceptions. 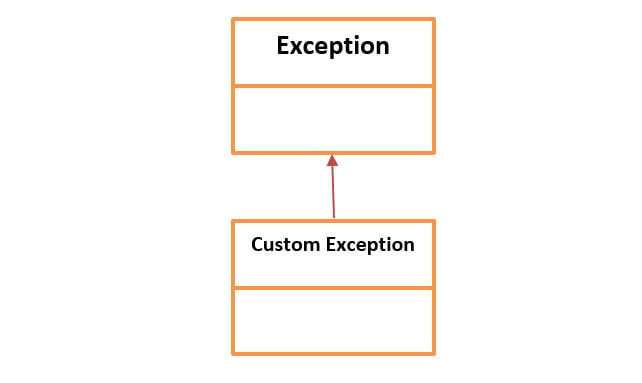 NOTE:
Take note of the docstring that the CustomException class contains since it functions as a statement. Therefore, the pass statement is not required to make the syntax legitimate.

Now, to raise a custom exception, we use a raise statement. Let's see the following example by extending the above code snippet and adding the raise statement to it.

As you can see in the code snippet above, we have defined a class called CustomException which is inherited from the Exception class. Now to raise our custom exception, we have to use the try-except statement. Try-except statement is used when we want to try something and if there is a problem or an error with the code we write, it will be caught in the catch statement. In the above example, we are raising a custom exception in the try statement, and the custom error will be caught in the except statement. We will see this in detail by looking at some examples ahead. The output of the above code is shown below.

In this example, we are going to make a custom exception class, we will call it dobException. We want to design a Python program that will take the age of the user, and after that, some conditions will be applied like if the person's age is above 20 and less than 30, He/She is eligible to apply for the job otherwise the program will through a custom exception message that the person is not eligible to apply for the job. The idea is simple, let's achieve this.

We have defined a class and named it dobException which is inherited from the Exception class.

In the above code snippet, we are taking the date of birth from the user, when the date of birth is entered, we are calculating the current age of the user by subtracting the date of a birth year from the current year. After that, we have enclosed the if-condition in the try-except statement. The try statement will try to match the entered age with the conditions specified by us, if the condition is true then the program be terminated in the try statement by giving the output that you are eligible for the job. If the age is less than 20 or greater than 30 then the program will jump into the except statement and our custom exception class will be called there with our custom message.

The user has entered the DOB as 1998, the program will calculate the age by subtracting the DOB entered from the current year. In our case, it is 2022-1998 which is equal to 24 years. The program will show a message that you are eligible for the job.

Another user has entered their DOB which is 1975, the age of the user is 2022-1975 which is equal to 47 years. In this case, the dobException class will be called in the except statement and our custom exception message will show. Let’s see another example.

In this example, we are inheriting our custom exception class from a base class named Error. The goal is to make a program that will take a number from the user, if the number is zero then the program will go into our custom-made exception, otherwise, it will print the number. Let’s look at the code below.

We have defined a class called Error which is inherited from the Exception class. Then we defined our custom exception class named zerodivision which is inherited from our base class Error, In the try section, we are taking a number from the user, then a condition is applied, if the number is equal is to zero then the try statement will our custom exception message, otherwise, the number will be printed. Let’s run the above code.

The number entered is zero and the program throws our custom build exception.

Let’s go into something different and in detail now. Let's say a bank has a policy that if the balance is less than or equal to 2000 then the customers cannot withdraw money. In this example, the current balance is taken as 30000, and the customer wants to withdraw some money from the bank. If the customer wants to withdraw 29000 from the bank then the code will through our custom-made exception. let's look at the code below to understand it more clearly.

We have a class named BankBalanceException(Exception)which is inherited from the Exception class. We have a function check_current_balance()that will take the amount of money the customer wants to withdraw, this function will also check if the balance after the withdrawal is less than or equal to 2000. If yes, the code will immediately through our custom exception, else the amount will be withdrawn successfully. let's give it a run.

The customer wants to withdraw 29000 from the bank, the current balance is 30000. The amount after this withdrawal will be equal to 2000 which is not acceptable by the bank, so the code has thrown our custom exception.