I am using Python 3.6 for all the examples:

In this example we have an input file with following content:

Here we wish to replace "input" with the word "output" and then save the entire content in a different file b.txt. Following is my script to perform this operation:

Next we perform the replace operation and write the output in f2 file object which is used to write in b.txt. Lets' execute our script:

As we are not printing anything on the console, the STDOUT is blank. Verify the content of b.txt:

So the script has successfully replaced all instances of input with output and saved the output in a different file.

In this example we will perform the string replace operation in the same file. The difference would be that in this case we store the data of the file in the memory, perform the replacement and then overwrite the content of the input file with the data we stored in the memory. So similar to previous example, we will replace all instances of "input" with "output" string in the same file.

This method is safe to use unless you have got a huge file to work with which is too big to load into memory in one go, or you are concerned about potential data loss if the process is interrupted during the second step in which you write data to the file.

Here is the content of my input file a.txt:

Following is our python code:

Since we are not printing anything on the console, the output is blank. Let's verify the content of our input file:

As expected, all the occurrence of "input" is changed to "output" within the same file.

Example-3: Python find and replace text in the same file

In this example I have a file /tmp/input.txt with the following content:

Here I wish to replace all the occurrences of initrd.img with patch.img. For this purpose we will use fileinput module.

Syntax to be used with fileinput module:

We will open the file and store it in a file object, later using for loop we will iterate over each line and then perform find and replace operation. Following is my sample code:

I have added an extra if condition to print Match and No Match which is completely optional, I have just added it have some debug output. The r+ mode opens a file for both reading and writing. The file pointer placed at the beginning of the file.

Output from the script:

So there was a single match, and here is our input.txt after executing the script:

In the previous example also we used fileinput module but we also were relying on inbuilt python function to open the file in read write mode and then performing the operation. In this example we will only use fileinput module to find and replace string in the same file.

Following is our input file:

Here we will replace all instances of 'input' with 'output' in the same file.

Let's us execute the script:

The execution will update the content of input.txt and since we had added backup='.bak, so a new backup file will also be created. 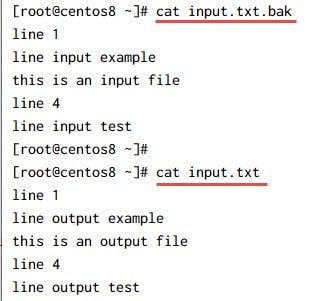 In this tutorial we covered different examples to perform find replace action and string replace in the same file or a different file using Python programming. You can choose the example as per your requirement as each have their own pros and cons. For example if you have a very big file where you have to perform the operation then it is better to avoid example-2 where we stored the content in the memory.