In this tutorial I will share different methods you can use to ssh and scp to target node with password in shell script or from terminal.

Method 1: Use expect to do ssh with password instead of key

We can utilise expect to provide the password in an automated way without user prompt in a shell script. Expect is a really handy tool when it comes to automation where user input is expected. Although the demerit would be that anyone can open the script and check the password as the password would be in plain text format.

So if security is not your concern you can use expect to ssh with password.

HINT:
I will be using RHEL distribution for all the example output in this tutorial which uses dnf/yum as package manager. If you are on Ubuntu/Debian then you can use apt to install/update the rpm

Install expect if it is not installed already on your server.

Below is a sample expect script which can use used to perform SSH and execute a command, the password is provided internally in the script:

Let us execute the script and verify the output:

Snippet from my terminal

You can find the same output in /var/log/ssh_tmp.log which we have defined as our log file in the script.

Scenario-2: Use expect inside bash script

Now this was a separate expect script but you can choose to integrate it inside a shell script which would look like below. I have moved the input argument inside the bash script instead of expect but that is totally upto you, there is no such restriction what so ever. 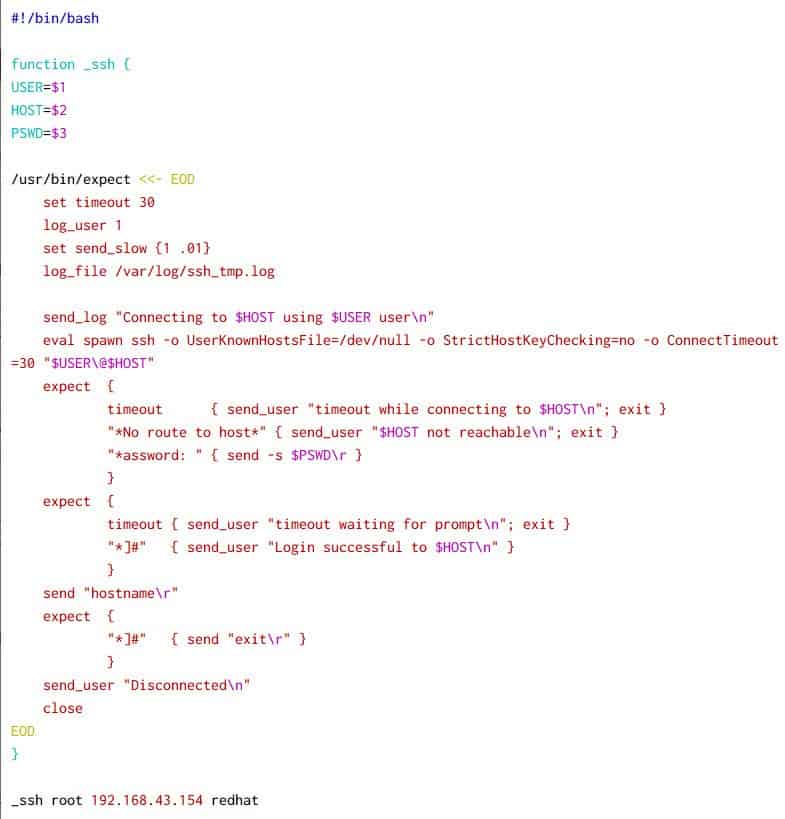 We can also transfer files to another server without getting a password prompt using expect script. Here is one example which uses a separate expect script to transfer /tmp/src_file to target host:

sshpass is a utility designed for running ssh using the mode referred to as "keyboard-interactive" password authentication, but in non-interactive mode. This rpm is provided as part of EPEL repository and does not requires a key for performing SSH.

Make sure EPEL repository is installed on your server:

If it is not installed, then you can install the same using:

You can search for this package in the repository

Let's quickly install this rpm for the demonstration:

In this example we provide a plain text password to sshpass which is highly insecure because any user with access to your server and history can see the password.

If we wish to check the hostname of remote server, then the command would be:

You can also transfer files without getting a password prompt by combining scp with sshpass.  In this example we copy a file /tmp/src_file to our remote server with scp and sshpass

Scenario-3: Use file descriptor with sshpass

This is the most recommended method to use sshpass wherein we provide the password as a file descriptor instead of plain text. This part of code snippet is taken from stackoverflow

You can put this in a script and use it to securely login to a server without getting a password prompt.

There are many other methods to use sshpass such as use a text file which contains the password, define a variable SSHPASS and use it instead of plain text password. You can get all these information from the man page of sshpass.

HINT:
Since I have already explained about how public private key combination works, I will be very brief here with the commands.

In this example we create a password less key pair so that the SSH won't prompt for any password. Use ssh-keygen to generate a key pair with -P "" to provide an empty password

If you face any issues, make sure PubkeyAuthentication is set to yes in /etc/ssh/sshd_config of your target node i.e. 192.168.43.10 in this case.

In the previous scenario we had set an empty passphrase for the key pair but what if you have set a passphrase. In that case the script will still prompt for a passphrase. We cannot avoid this scenario but if you have multiple hosts then we do can make sure that you get a passphrase prompt only once and SSH will continue to connect all the hosts. Now this is only possible if all these hosts are configured with the same private public key pair.

Next we copy this public key to our remote server's ~/.ssh/authorised_keys file using ssh-copy-id

So our connection is working as expected. Now to automate this via a script we will create a ssh agent and bind it to the private key which we use while connecting to the remote server

A new ssh agent PID is created 60251. So as long as this PID is running we can now SSH to our remote server without adding any passphrase. You can verify the same:

Once you are done, you can kill the ssh-agent process

If you wish to in-corporate this into a script, here I have written a shell script which performs multiple checks before using or creating a new ssh agent

We also have a very handy tool written in python i.e. PSSH and PSCP where you can connect to multiple hosts by just entering the password once on the terminal. You can also setup password less login using private public key pair and then use the public key to connect to remote server without any password.

PSSH is part of EPEL repository which we had already installed in our previous section so we will just install PSSH.

Next we will generate a password less private public key pair

We have to now create an ssh agent and bind it to the private key which PSSH will use:

Now we can use PSSH to connect to remote server without worrying about password:

Here I have used multiple SSH options to only use PubKeyAuthentication and disable other type of authentication methods.

In this tutorial we covered different scenarios to automate SSH with password in shell scripts with different methods. The most recommended and secure method is Public key authentication followed by SSHPASS with descriptor. You may also choose to use expect script which is also preferred but the only problem would be lack of security as the password would be in plain text format.

Lastly I hope the steps from the article to configure ssh with password in Linux was helpful. So, let me know your suggestions and feedback using the comment section.