top program provides a dynamic real-time view of processes running in the Linux system. It also displays the system summary information and processes or threads currently managed by the Linux kernel. The output of the top command is interactive and can be controlled by pressing keys to some extent.

Understanding the output of top command

These are the Fields/Columns Headers, which you will see on the top command output.

Different examples to use top command

Now, let's have a look at some practical examples of top commands in the Linux system.

You can run top command without any options or arguments to display running processes in the system. You can press q or kill the program to exit the output mode. 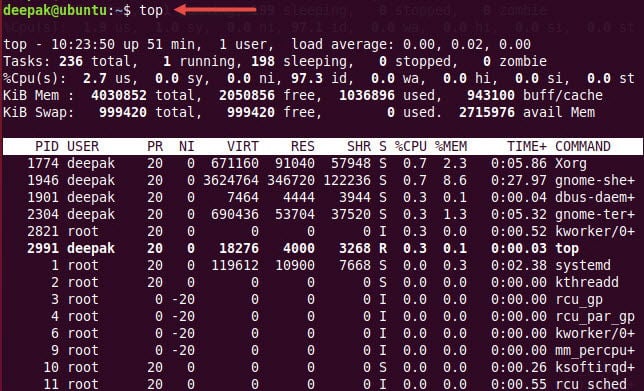 -b option displays the output in batch mode or non-interactive mode. It will not accept any inputs and runs until you kill the program.

-d option allows you to specify the delay time between screen updates. It takes an argument of time in seconds as a number.

For example, if you put the number 10 after-d option, the output will be updated every 10 seconds. Try it on your terminal to get the desired output.

4. Set the number of iterations in top command output

With -n option, you can put the limit of iterations top should produce in the output.

For example, if to put the iterations limit of 5, you can use the following command.

Instead of viewing all the processes, you can monitor the specific process using the process ID. -p option lets you specify the process ID and view the particular process in the output.

6. top command to display the process of specific user

Normally, top command displays the running processes of all users in the output. To view the process by specific users, you can use -u option followed by the user name. You can also use user ID instead of the name. 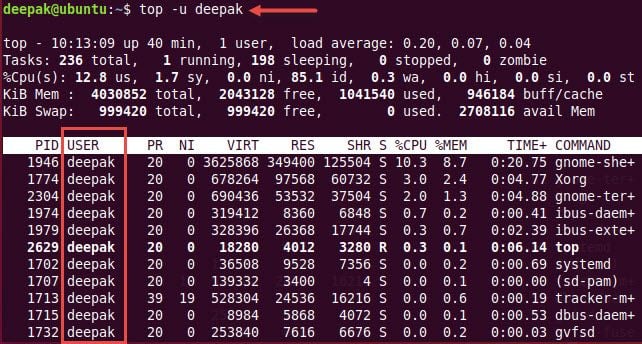 -w option allows you to adjust the output width by decreasing it. You cannot increase the width of the output. 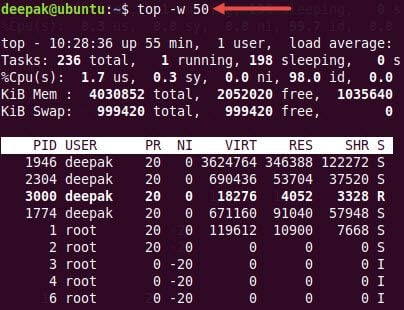 8. Display Mem and Swap in KB/MB/GB/TB/PB/EB with top command

When top command is running, you can press E option to change the unit of memory as displayed with top command. Different supported units are as shown below:

By default top shows Memory and Swap in KB

When E pressed one time (show in MB):

Similarly you can press E multiple times to change the Unit type of Memory.

You can sort the process by memory usage in the output using M key.

To sort the processes by CPU Usage, press P at the displayed output.

f key lets you select or order fields in the output. When you press f, the field management screen appears.

Select Field: Press 'd' or <Space> to select the field to display in the output.

Let's add the field UID to the output.

Order Field: Navigate with Up/Dn, Right selects for move then <Enter> or Left to save changes

Now, let's order the field to a different location. Here, we are putting the field UID between USER and PR.

NOTE:
The changes made as part of this example is temporary, and next time when you execute top command, the added/modified sections will not be visible again.

You can press 0 to hide or show the value 0 in top command output. The blank field in the output contains 0, which is suppressed.

You can use A to switch between alternate display or full display mode in the output. Next you can press 'g' where you will be prompted to enter a number between 1 and 4 designating the field group which should be made the current window. 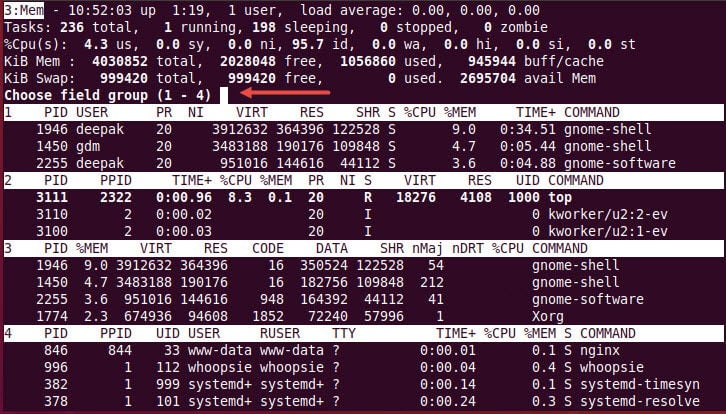 If you press d, you will be prompted to enter the new delay time.

With e, you can change the memory scale in the task window, which ranges from kibibytes (KiB) to pebibytes (PiB). If the scaling range is high, you are more likely to get zero value. Such zero values are not suppressed by interactive command 0 .

When you press g, you will be prompted to enter the number between 1 and 4 which allows you to choose another window or field group.

You can view the active tasks in the system by pressing the key i. Other idled or zombied processes will not be displayed.

You can press Z key while top is running. After which you will be presented with the list of colors to choose with. Follow the instructions as shown below: 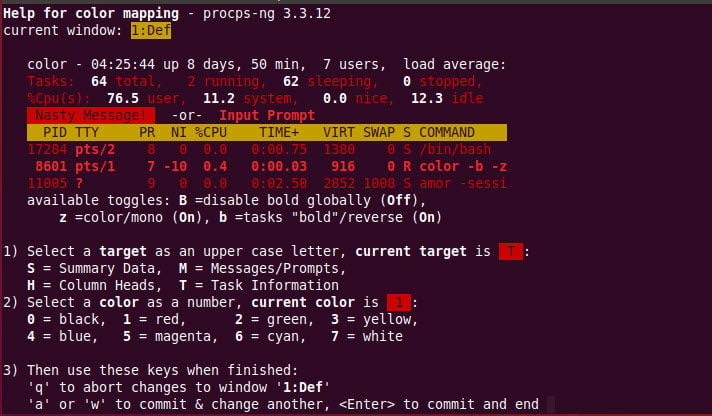 Here we will select 3 for yellow, and by default only Task Information is selected:

You can use the following keys to scroll the tasks or columns in the output.

This is the end of our tutorial on top command examples in the Linux system. We hope you will be now able to view the Linux processes using the top command. If you still have any confusion, use the comment section below to ask the questions.