Linux memory management is a very vast topic and it is not possible to cover all the areas in single article. I will try to give you an overview on major areas and will help you understand important terminologies related to memory management in Linux. 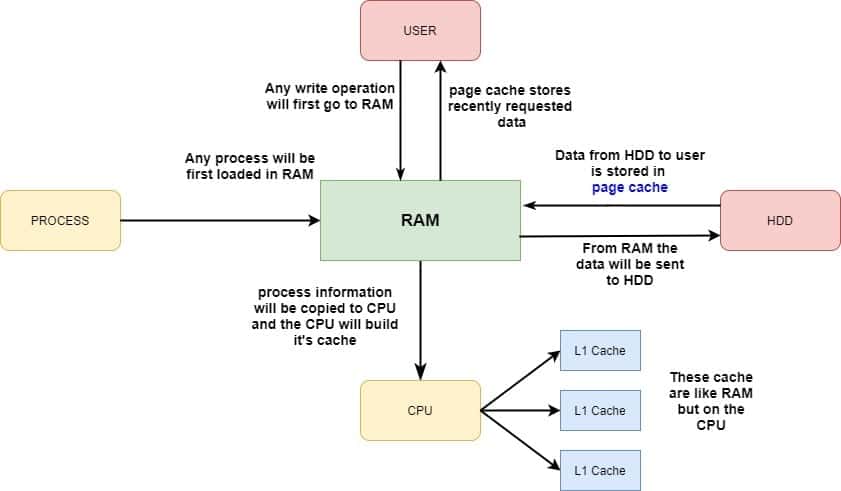 Now we will discuss the individual part of Linux memory management and understand different terminologies related to this flow.

When analysing Linux memory usage, you should know how Linux uses Virtual and Resident Memory. Virtual Memory on Linux is to be taken literally: it is a non-existing amount of memory that the Linux kernel can be referred to.

Currently my RHEL 7 Linux has 128GB of Total Physical Memory

What is memory over-allocation (over-commitment) and OOM?

I have written another article with the difference between RES and VIRT and also proper ways to check the memory utilisation of individual process.

Advertisement
ALSO READ:
You can also create your own man page with a list of instructions for a script or a custom tool which you have created. In real time production environment it is always recommended to also create and release a man page for every script or tool we develop.
ALSO READ: 5+ Linux Screenshot Tools with Examples [GUI and CLI]

Above we learned about Virtual Memory and how this is important for the working of Linux environment. Another item that is quite important is the Page Cache.

Let us take an example to understand this clearly:
When there is a request of any data which is present in the page cache, first the kernel checks the data in the buffers which contain the metadata which points to the actual files/data contained in the page caches. Once from the metadata the actual block address of the file is known, it is picked up by the kernel for processing.

Read more: What is difference between page cache and buffer?

We discussed this topic briefly in the starting of this article using a diagram for Linux memory management, now we will follow the flow of disk read and write operations with page cache between user (kernel) ⇔ memory ⇔ disk

ALSO READ: How do I install the Linux library libc.so.6 [SOLVED]

Kernel read and write operations operate on main memory. Whenever any read or write operation is performed, the kernel first needs to copy the required data into memory:

Read More: What is cache in "free -m" output and why is memory utilization high for cache?

What is the advantage of keeping page cache?

In other words we can also frame this question as, why we should not clear the buffers and page cache so frequently?

To demonstrate this in Linux memory management, we will take a very simple example: I will create a small file with some random text:

Next we will synchronize cached writes to persistent storage

Now since the caches are clear, we see that it takes around 0.031 seconds to read the file from the disk

Now since we have read the file once, it will also be available in our page cache so if we try to read the same file again, it should be picked from the page cache.

As you see now the read time is hardly 0.001 second which is much faster compared to our earlier result.

ALSO READ: How to convert String to Boolean JavaScript? [SOLVED]

As we know, the kernel keeps filling the page cache with pages containing data of block devices. So whenever a process modifies some data, the corresponding page is marked as dirty -that is, its PG_dirty flag is set. The dirty writeback thresholds based on dirty_ratio and dirty_background_ratio parameters also take HugePages into account. The final threshold is calculated as a percentage of dirty-able memory (memory which can be potentially allocated for pagecache and get ditried).

ALSO READ:
How to configure HugePage using hugeadm (RHEL/CentOS 7)
How to check Transparent HugePage usage per process in Linux with examples

A dirty page might stay in main memory until the last possible moment - that is, until system shutdown. However, pushing the delayed-write strategy to its limits has two major drawbacks:

How dirty pages are flushed or written back to disk?

There are several parameters with sysctl which control when and how this disk writeback is performed.

Advertisement
NOTE:
All these parameters can be inspected and modified during runtime (without rebooting) in /proc/sys/vm/. The kernel uses only one of the respective ratio/bytes parameters, the other is set to 0.
ALSO READ: Fix: cpio premature end of archive, List (lsinitrd) & Extract initramfs in RHEL Linux

The writeback can be generally divided into 3 stages

Read More: What is swappiness and how do we change its value?

Lastly I hope the this article on Linux memory management and understanding it's terminologies was helpful. In this tutorial guide we learned about different areas of Memory used by Linux kernel to enhance and optimize system performance. This is not a complete guide of Linux memory Management but this will help you kickoff and know the basics of Linux memory. So, let me know your suggestions and feedback using the comment section.

I have used below external references for this tutorial guide:
Understanding dirty pagecache in sysctl
The Definitive Guide to SUSE Linux Enterprise Server 12