Getting started with Wireshark Dissector

A Wireshark dissector is simply a decoder, which is interesting in a specific type of traffic. Once it finds the traffic, it interprets the payload. In short, it is a protocol parser. 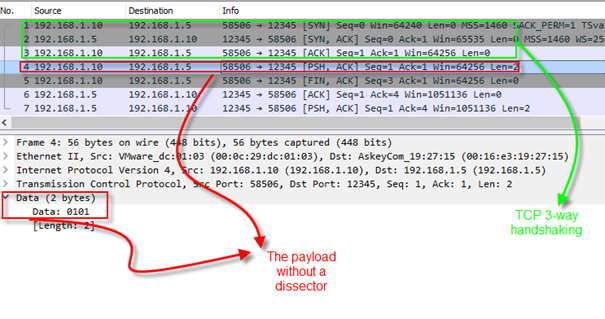 The first 3 packets belong to the TCP 3-way handshaking. After the TCP connection has established, the client sends some data that Wireshark’s dissectors do not understand in packet number 4.

For sake of simplicity, we will create 2 bytes protocol, which will be working in client and server architecture. The client will be able to query the service status on the server. The server will response the client with a relevant answer. The first byte is used to distinguish whether the message type is a "question" or an "answer". The second byte will be used for the content of the "answer" or the  "question".

Below I created 4 message types.

There are also different types of dissectors that can be useful for different tasks.

ALSO READ: How to connect virtual machine to internet connection in VMware/VirtualBox

The difference is that a chained dissector doesn't run against every packet, only those packets that are handled by the dissector off of which you are chaining. Chained dissectors are handy for extending an existing dissector without having to rewrite it completely, whereas post-dissectors are useful for adding a new dissector that provides additional context based on what other fields are set.

There are 3 ways commonly used ways to write your own dissector:

Most of Wireshark dissectors are written in C/C++ programing language. It is fast and efficient but It requires a full fledged development environment.

In this method, you describe your data using a specific format and save it in text file(s). Wireshark reads the protocol definitions from the file(s). It is similar to a programming language. Interpreted text files are simple to use but slow for dissecting packets. Wireshark Generic Dissector does not require a development environment. The only thing you need is a text editor.

This is a very common method used. Wireshark has a Lua implementation that makes it easy for people who are unfamiliar with C to write dissectors. Lua is a scripting language in that Lua code is read from a plain text script/source file and then executed by the Lua interpreter—a compiled executable itself—dynamically at runtime. Another word for scripting language is interpreted or managed language. Because the code is interpreted at runtime, and generally all memory access is managed by the runtime, Lua, in this case, is the interpreter.

Although I am not familiar with Lua, I will use Lua for this article. It takes a little time to look at its syntax.

Step-1: Declare the protocol. My protocol short name (display filter name) will be "ulive.lua". The long name in the protocol tree will be "Service State Protocol". 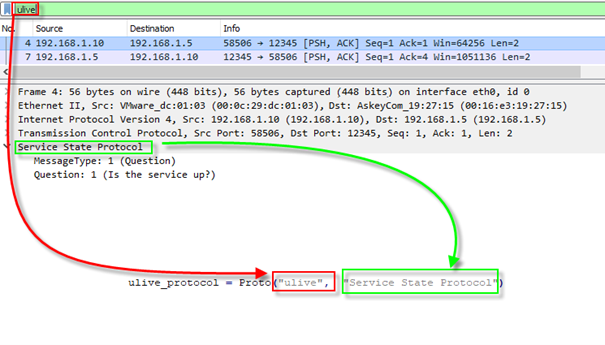 Step-2: Declare the fields with their types. We will have 3 fields which are: 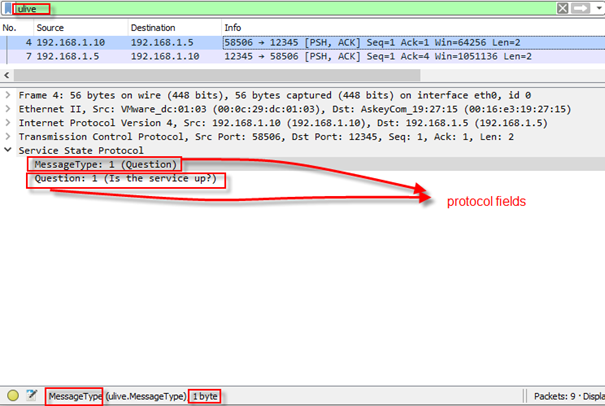 The dissector must register its data fields with Wireshark so that Wireshark knows how to display them. If you do not register the fields, you will get the error above.

Step-5: Specify which port and protocol will ve used. I will use TCP and and port 12345. When Wireshark come across a packet with these parameters, it will use my dissector.

We need to create some data to test our dissector. For this purpose, I coded a pretty simple client and server in Python.

Adding the dissector to Wireshark

Step-2: A window appears, then click "Folder" tab and you will see a list of paths. Click on "Personal Lua Plugins". If you have not created the directory before, click "Yes" button to create the directory. 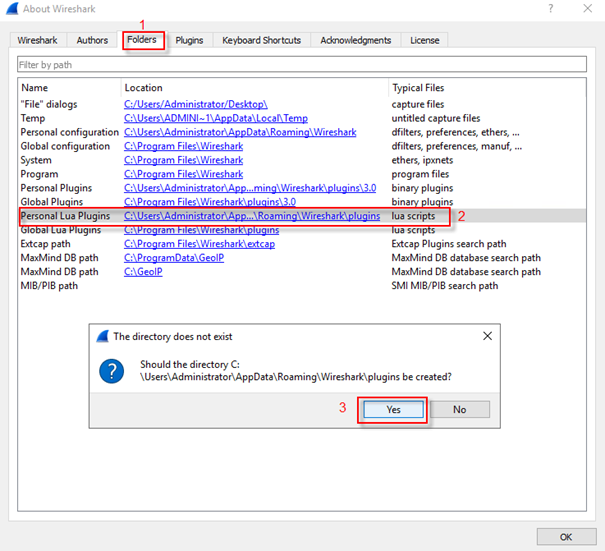 Paste your Lua file in this directory. 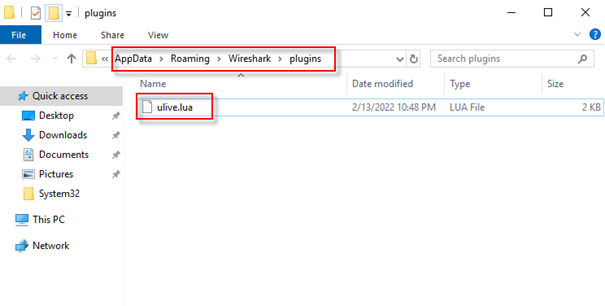 Step-3: Reload your Wireshark to activate the dissector, then open packets you captured or my packets below. You should see something like below. 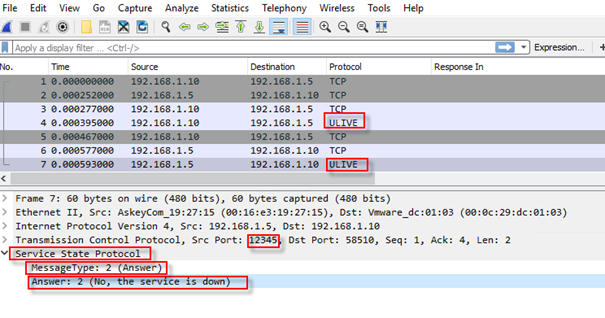 Wireshark may not dissect a proprietary protocol if you use one of them in your enterprise. With help of Lua, you can create your own dissector and easily integrate it with Wireshark.