Recently, I have been sent a network trace file to analyze. The common complains were related poor (slow) TCP performance. After examining the trace file in detail, I found the culprit was TCP Zero Window packets.

What is TCP Zero Window?

Assume we have a sender and a receiver exchanging data like figures below. I will overview TCP zero window in a couple of steps.

Step-1: Zero window only happens when TCP is used as the transport protocol. There is no such thing in UDP. During TCP 3way handshaking both the sender and the receiver advertise their receive window. As seen below, the receiver sets its receive window to 4 bytes. The same goes for the sender. For sake of simplicity, each cell represents a byte. At the start, both of the buffers are fully free. 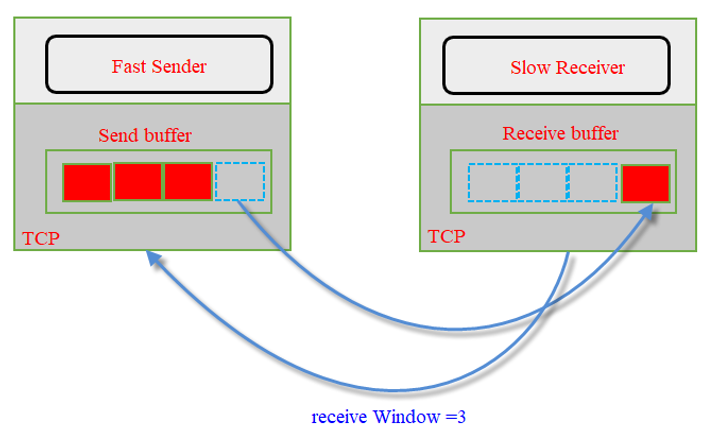 Step-3: The sender puts another byte on the fly, freeing its buffer one more byte. As soon as the receiver gets the data, it places it in one of the free cells and lets the sender know there are only two cells left free with setting receive window to 2. 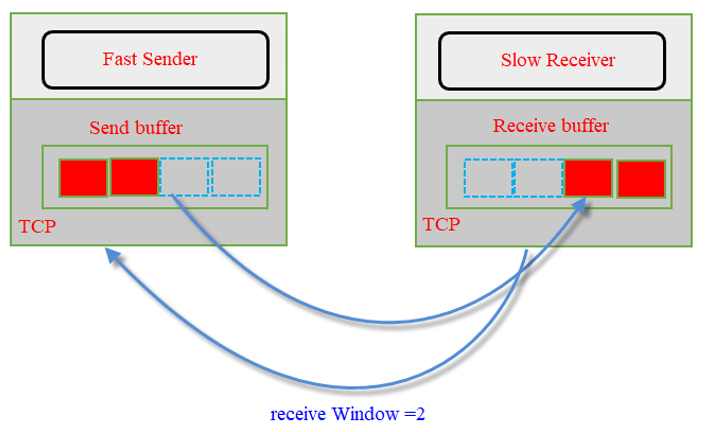 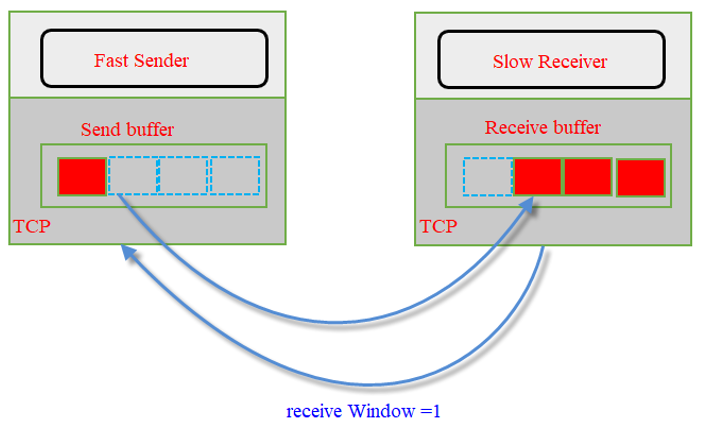 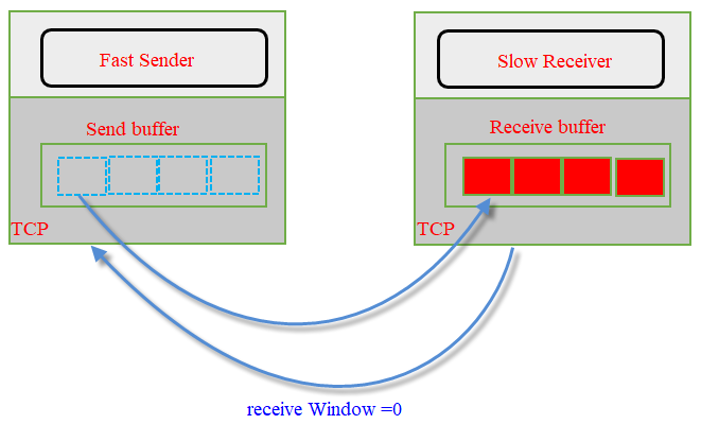 Step-6: The application on the server delivers some data to TCP and the data is stored in the buffer. Since the sender has not gotten any window update from the receiver, it has to wait without sending any data. This causes a delay in the network. As a result, the clients experience a slow network.

Step-7: The receiver frees 3 cells (bytes) and lets the server know that. After this step, the server will continue to send the data. 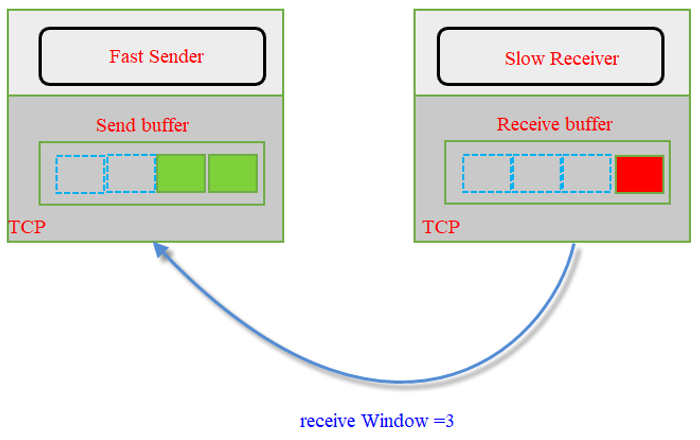 Zero window generally happens when there is heavy data exchange between the parts and low resources to consume. It is not easy to reproduce a TCP window zero event in a lab, so I will use Curl tool to cause a TCP zero window. It provides rate limiting by specifying the maximum upload and download transfer rate.

Step-1: For demonstration, I will use Curl to download a web page with setting rate limit 1K for each direction (download and upload). After starting Wireshark, apply the command below for rate limiting. The tool will optimize TCP receive window accordingly.

Following screenshot shows the packets I captured. Notice that there is some nice expert info related to “[TCP ZeroWindow]” and “[TCP Window Full]”. 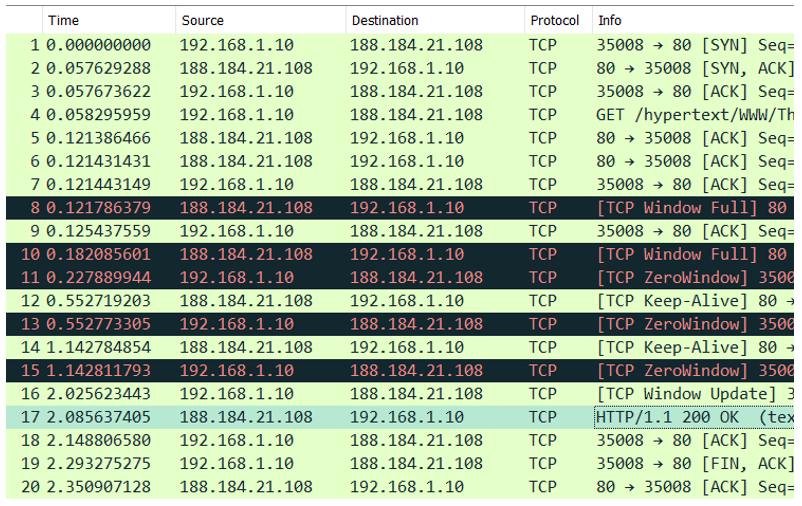 Step-2: The receiver advertises its receive window of 1152 bytes to the sender in the packet number 1.

Step-3: The sender advertises its receive window of 28960 bytes to the receiver in the packet number 2. 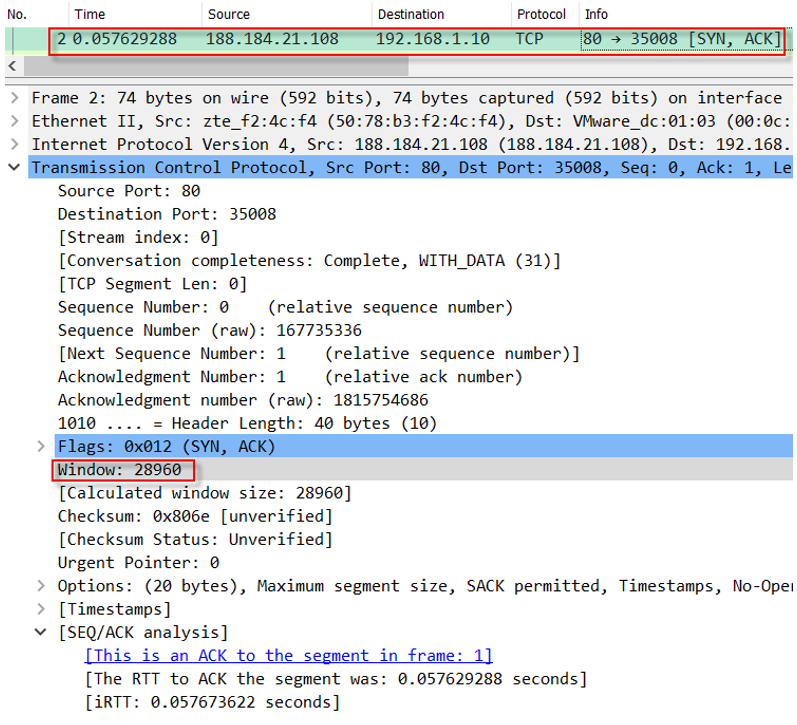 Step-4: After completing TCP 3way handshaking, the receiver sends a http GET request in packet number 4. 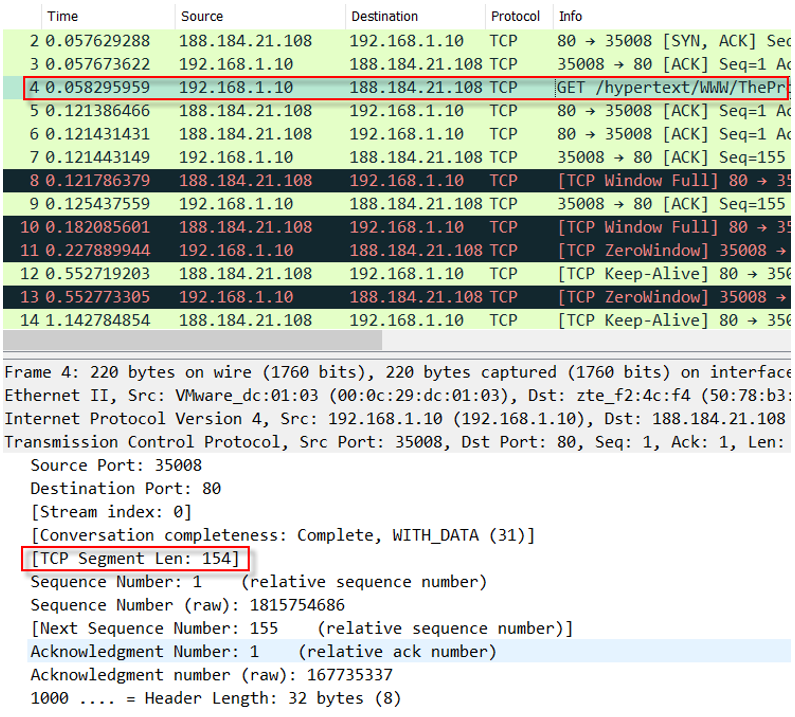 Step-5: After receiving the request, the sender (the server) responses with a packet size of 576 bytes in packet number 6. 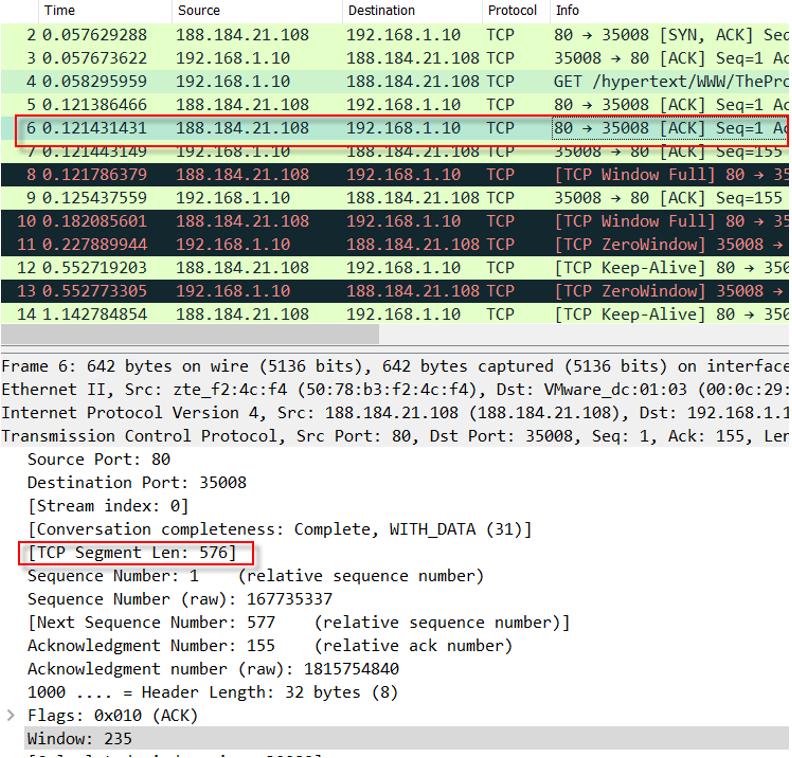 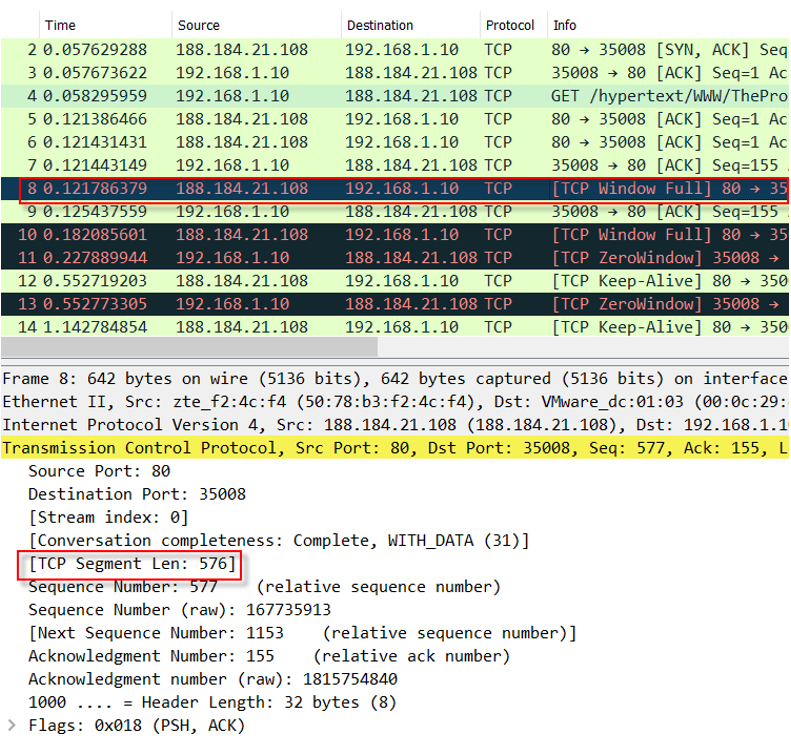 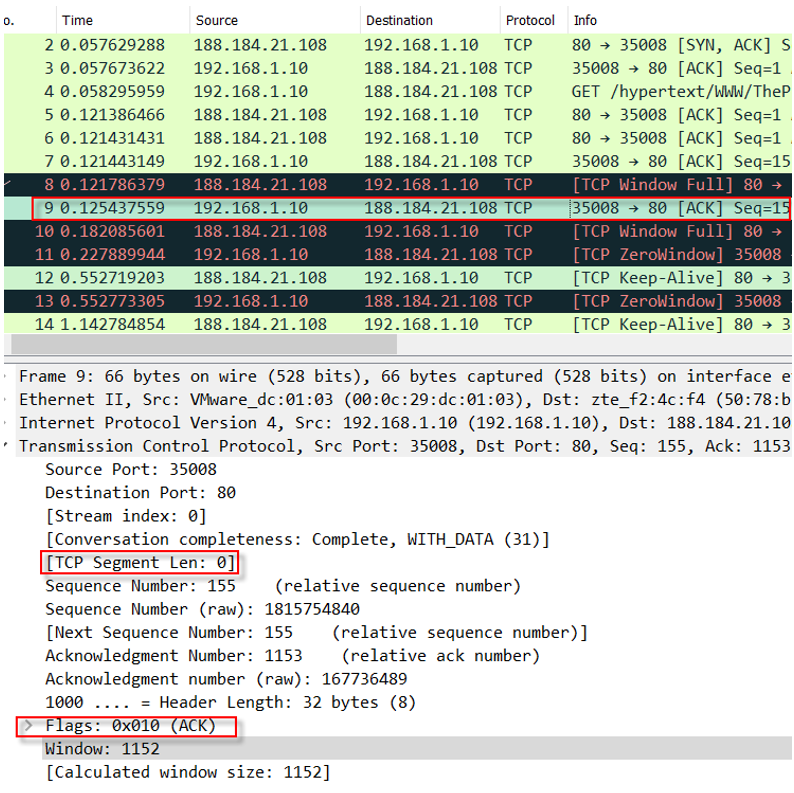 Step-8: The sender sends a packet size of 1152 bytes, which fills the receiver receive window. Wireshark shows that in packet number 10.

Step-9: Since the receiver window is full, the receiver notifies the server to stop sending data with setting window size to zero in packet number 11. 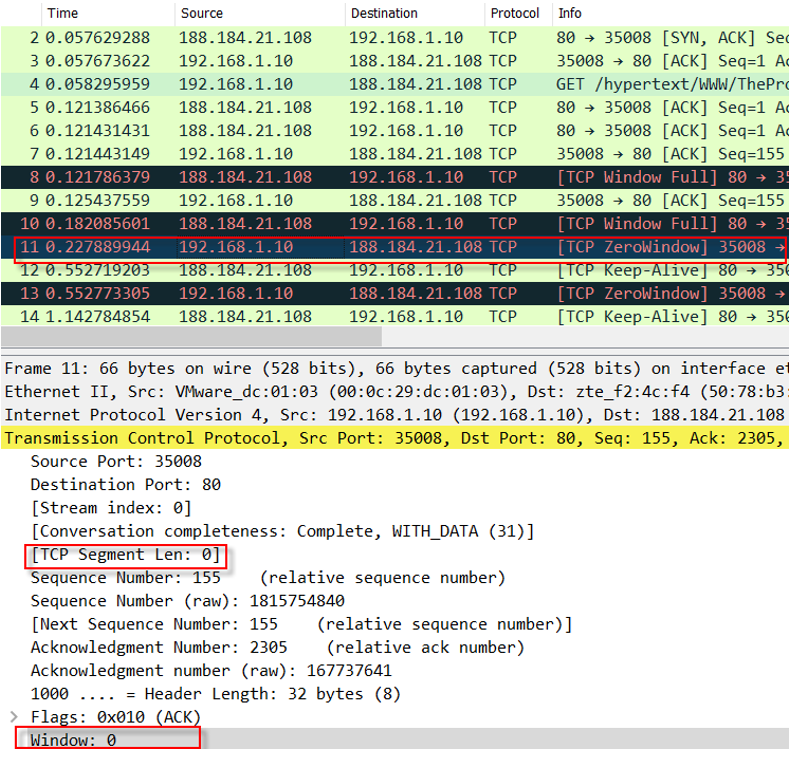 Step-10: with packet number 12, the sender ACKs the receiver and tells it to keep the connection alive.

Step-11: The receiver keeps setting its window to zero in packet number 13.

Step-12: The receiver and sender keep repeating the same pattern for the next two packets.

Step-13: After freeing the buffer, the receiver updates its window to 1152 and the data transfer starts again. When we look at the time column, we can see that the zero window caused almost 2 seconds delay. 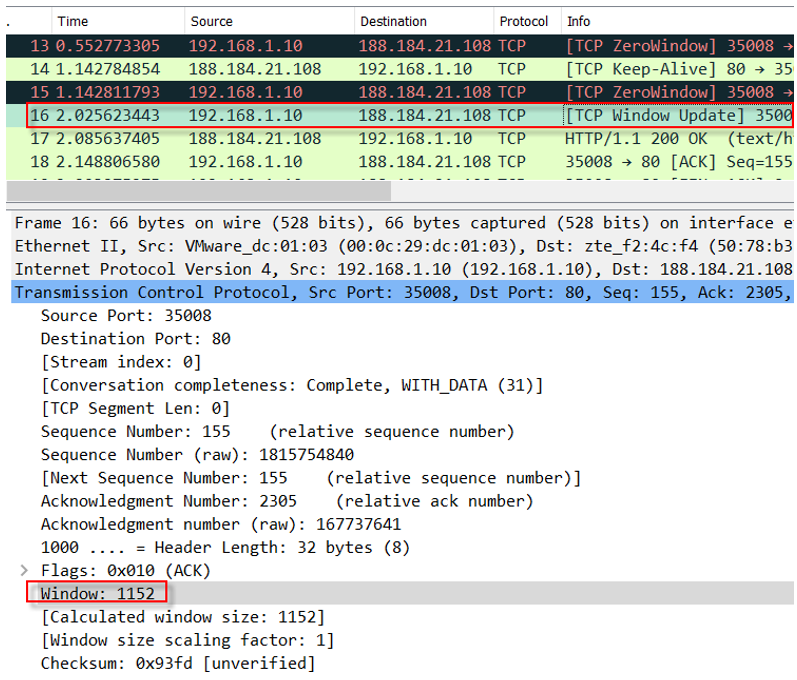 TCP zero window plays a great role in experiencing a slow network. There can be variety of reason behind it. To address some common reason: