There're a few rules to follow while developing YAML files. YAML uses indentation (like Python), which builds the relationship of items with one another:

Below we take data in the simplest form such as key value pair in the YAML format where Key and value are separated by a colon. It is important that you give a whitespace followed y colon differentiating the Key and Value

Array or Lists in YAML File

You can learn more about YAML syntax at: Ansible playbook tutorial | How to write a playbook with example

We know that YAML files are based on indentation but one important thing is that in YAML file we should not use TAB instead it is recommended to use space character. So we will update our .vimrc file to only allow two spaces when someone hits a TAB button for yaml FileType. We will add this in the home folder of ansible user on the controller node where we will be working with our YAML files.

Here I have tried to highlight the structure of a playbook: 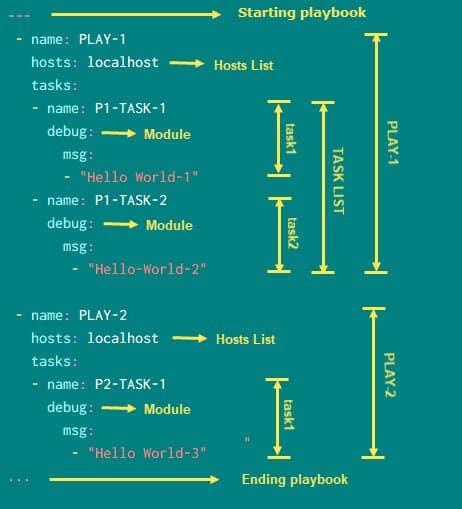 Next in our Ansible Tutorial we will start learning everything about Ansible Playbooks with multiple examples and scenarios.

1 thought on “Beginners guide to YAML Syntax in Ansible Playbooks”