If you are an IT Administrator then it is possible that you may have once or more scratched your head wondering what the hell is the difference between CPU, Processors, Core, Threads etc. All of these sound so related and yet they are completely different. When it comes to performance optimization then you should be familiar with these terms. So let me help you understand all these terminologies related to CPU so you can make a wise decision next time you have to work on these topics.

I have already covered the basics of memory management in Linux, so I will only concentrate on the CPU related explanation here.

Following is a sample output of lscpu:

This is from RHEL 8 server installed on a physical hardware (HPE ProLiant Blade). Here my CPU Model is "Intel(R) Xeon(R) CPU E5-2640 v3 @ 2.60GHz". Let us understand each of these fields:

Core(s) is a hardware term that describes the number of independent central processing units in a single computing component (die or chip).

To get the list of physical cores you can use:

Now a socket is the interface between CPU and the motherboard and since I have two sockets so basically I have 8 cores of CPU in each socket so there are total 16 physical cores available on this server.

You can also get this information using:

A Thread, or thread of execution, is a software term for the basic ordered sequence of instructions that can be passed through or processed by a single CPU core. A core with two hardware threads can execute instructions on behalf of two different software threads without incurring the overhead of context switches between them.

Here on my server I have 2 threads per core:

Based on CPU max MHz and CPU max MHz, the clock rate i.e. the maximum frequency of this CPU is 2.6 GHz while the minimum threshold is 1200 MHz.

CPU cache is pretty important for the efficiency of dealing with applications by the CPU. There are different levels of cache memory and they are used to keep data that needs to be close to the CPU. The cache level which is more closer to the CPU is the most expensive.

Let's try to understand the cache architecture with the following image of 6 core processor: 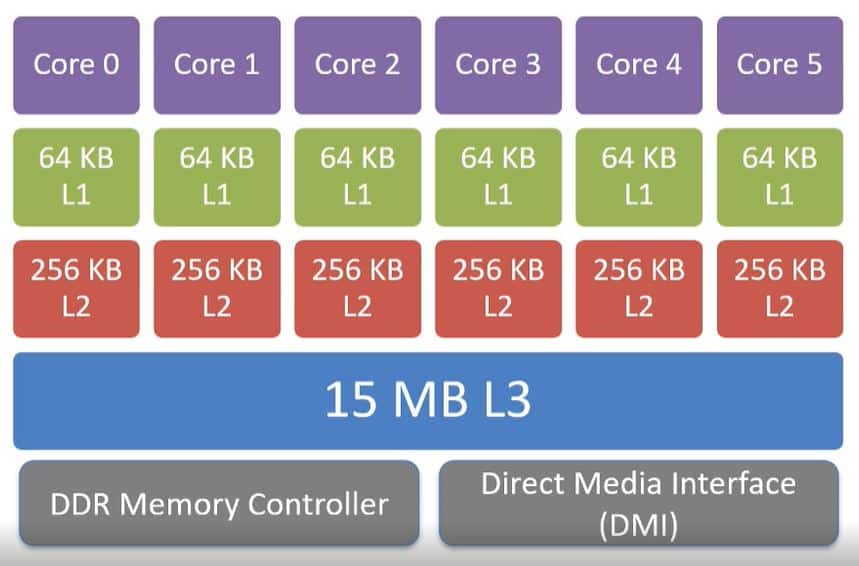 And these are features that you might want to consider if you are purchasing new hardware.

You can use valgrind tool with Cachegrind to check the cache misses with your software or system applications.

You can execute valgrind as shown in the following snippet with your application:

I have just execute 'ls' command which shows that it was missed in L1 cache 2.4% of the time and 1.7% in L2 Cache. Currently also this program was found in L3 cache. Instruction data was fetched properly at the level 1 cache almost all the time, except for 0.27% of the time and with a cache miss rate of 0.25% at L2 cache.

Sometimes, your software will do something the processor wasn't built to predict, and the data will not be in the L1 cache. This means that the processor will ask the L1 cache for the data, and this L1 cache will see that it doesn't have it, losing time. It will then ask the L2, the L2 will ask the L3, and so on. If you are lucky, it will be on the second level of cache, but it might not even be on the L3 and thus your program will need to wait for the RAM, after waiting for the three caches.

This is what is called a cache miss. How often does this happen? Depending on how optimized your code and the CPU are, it might be between 2% and 5% of the time. It seems low, but when it happens, the whole processor stops to wait, which means that even if it doesn't happen many times, it has a huge performance impact, making things much slower 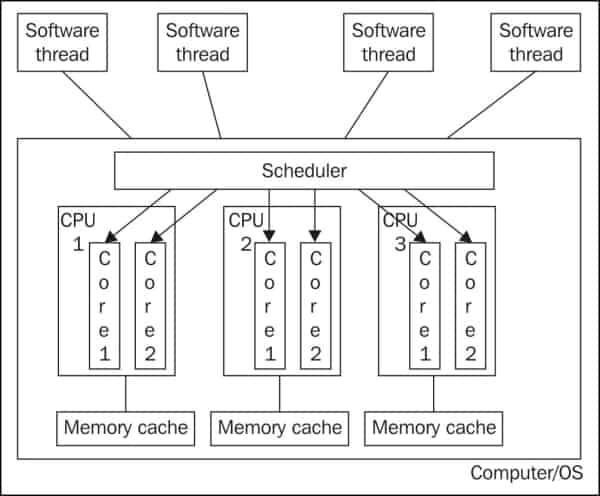 Hyperthreading is explained in the following diagram: 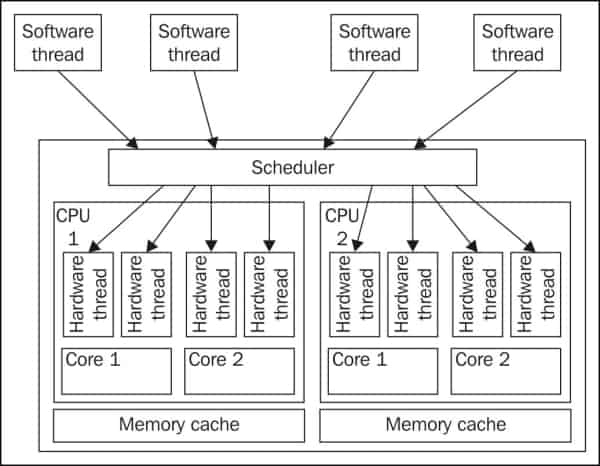 Here we have a sample Python script:

The pool code makes starting a pool of workers and processing a queue a bit simpler as well. In this case we used map but there are several other options such as imap, map_async, imap_unordered, apply, apply_async, starmap, and starmap_async. Since these are very similar to how the similarly named itertools methods work, there won't be specific examples for all of them.

We will execute this script with different amount of processors:

As soon as the single processes actually use 100 percent of a CPU core, the task switching between the processes actually reduces performance. With single core the script took around 3.5 seconds which with 16 physical cores it took 0.5 seconds. So obviously we see better results with multi-core processes.

But we have 32 logical processors using Hyper-Threading so let us try to utilize them as well and observe the results:

Obviously you weren't expecting these results. With logical CPU processor, the run time of the task is much higher compared to physical cores. Since there are only 16 physical cores, the other 16 have to fight to get something done on the processor cores. This fight takes time which is why the 16 process version is slightly faster than the 32 process version.

In this article I have tried to cover some of the most asked question related to CPU, CPU Cache, multi-processing and hyper-threading. Another question that is asked far too often is whether to enable or disable hyper-threading. From hundreds of reports and testing, it appears that it is better to leave it on for newer Intel servers. The fear of performance degradation due to hyper-threading is no longer valid, as it has gone through decades of development and all the initial issues have been resolved. It is also best to not count all hyper-threading cores as real cores, since they are still virtual. When counting the number of total cores available in a node, take a conservative approach and count slightly fewer than the total cores.