Lately I was going through some articles from different search engine to check open ports in Linux. I was quiet surprised with the results as most of these articles in the search results talks about using ss, netstat etc to check if a port is open in Linux.

You have to understand the difference and your requirement.

Do you want to check if a port is in LISTENING state on the destination server.

As it doesn't necessarily mean that if a port is not listening then it is not open. A port will be in LISTEN state only when it is in use by some process or else a port can be open and free but since it is not in USE it will not be listed with netstat, lsof, ss commands etc.

So I hope you are clear with your requirement.

In this article I will share the different ways to check open ports or if a port is open on the destination server in Linux.

nmap is an open source tool for network exploration and security auditing. Let's verify if nmap can successfully give us list of open ports on a Linux server:

Currently I have not added any firewall rules on my destination server:

Now let us check open ports between 35520-35522 on this server using some different client machine with nmap: 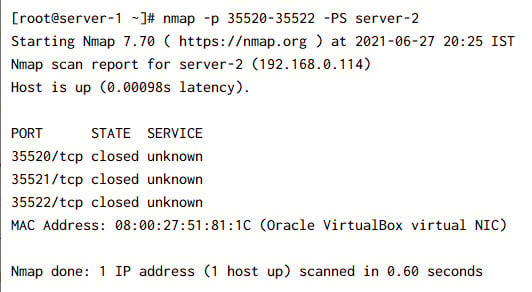 We have used -PN to perform TCP SYN/ACK check on the provided list of ports but the output claims that all of these ports are closed. But this is not correct as there is no firewall on server-2 and this setup in in my local LAN so no other firewalls in between these servers.

Now here are the list of listening ports on server-2:

So if we try to scan these listening ports using nmap: 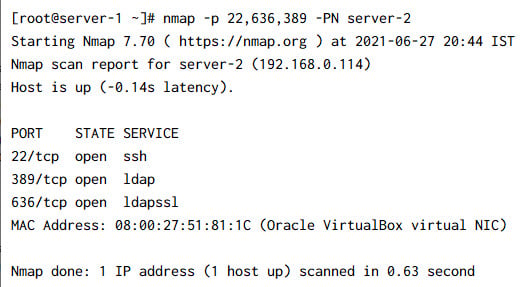 Let's perform some more tests. I will DROP all the incoming requests and only allow certain ports on server-2 using iptables:

So I have explicitly allowed port 35520, now let's perform nmap scan for this port and some others: 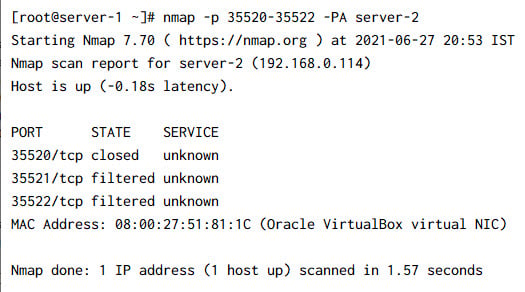 Now port 35520 is marked as CLOSED as it is explicitly allowed in iptables but currently is not in use while others are marked as FILTERED as they are blocked in firewall.

Though the current version of NMAP is capable of performing many tasks, it initially started out as a port scanner. NMAP has certain ways to detect whether the port on the target system is open or closed. NMAP detects the status of the target port using predefined states as follows:

Another wonderful tool to perform network scan is hping3 in Linux. You may download hping3 using EPEL repo.

We will retain the iptables rule which we applied in the previous example where we had blocked all the ports except 22 and 35520 and perform network scan using hping3: 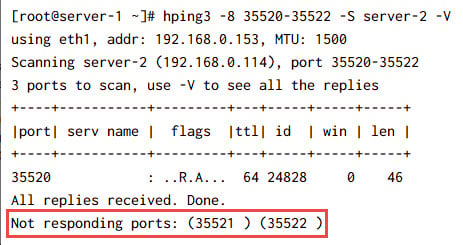 So based on the above hint, hping3 got a RESET request with ACK on port 35520 which means the port may be in OPEN state while the other ports in the provided range are not responding so they are closed.

If any of the port is in LISTENING state then hping3 will return SYN and ACK flag as shown below:

Now you may using the tools which I explained above to check open ports but if you wish to test firewall rules then I would recommend using netcat or nc tool. nc can be used to open any port and mark it as listening and then on the client server you can again use nc to send some dummy data to test firewall rule.

Let us retain the above applied iptables rule, so on our server port 35520 is allowed in the firewall. To test this firewall rule, we will enable port 35520 using nc:

So our server is now listening on port 35520, now let's try to connect to this port using any other client node:

As you can see, nc was able to connect to server-2 using port 35520. Now if you try to send any string from client to server:

Monitor the console on server-1 and you will receive this string:

Similarly let's try to test firewall rule for any other port which is blocked (we have blocked all the ports except 35520 and 22):

Since port 35521 port is blocked in the firewall, the same will not be accessible from server-1:

In this article I shared different methods to perform network scanning to check open ports and test firewall rules in Linux. There are many other tools available which can be used for this purpose. But again I don't rely on telnet, ss or netstat commands for this purpose as they may not give you accurate data based on your requirement. nmap, hping3 are very vast tools with alot of different options and features which are not covered in this article. I would suggest to go through their man page and explore different options.