Operating systems have a user with full privileges. However, since this user cannot be shared with the people logged into that system, they temporarily share some of their privileges with other users.
On Linux systems, the root user is the most authorized user. There is the sudo/wheel group for other users to use some of the privileges.
This group, which is called sudo in Debian based systems, is called wheel in Redhat and Arch base systems.

Users are taken to this group and authorized.

In the sudoers file, the wheel group is disabled in many Linux distributions. Even if the user is in this group, the following warning appears when he wants to perform an authorized transaction:

This issue is resolved by removing the # sign at the beginning of the %wheel lines. Users who are in the wheel group in the first wheel line can run all commands with their own passwords. In the second wheel line, users do not need to enter a password:

Opening this line is not recommended for security reasons.

ALSO READ: Fix "there are no enabled repos" & create local repository in RHEL 7 & 8

It can open the sudoers file with an editor(vi,nano etc):

or you can use visudo command:

Open the first line in the sudoers file and try the same action again: 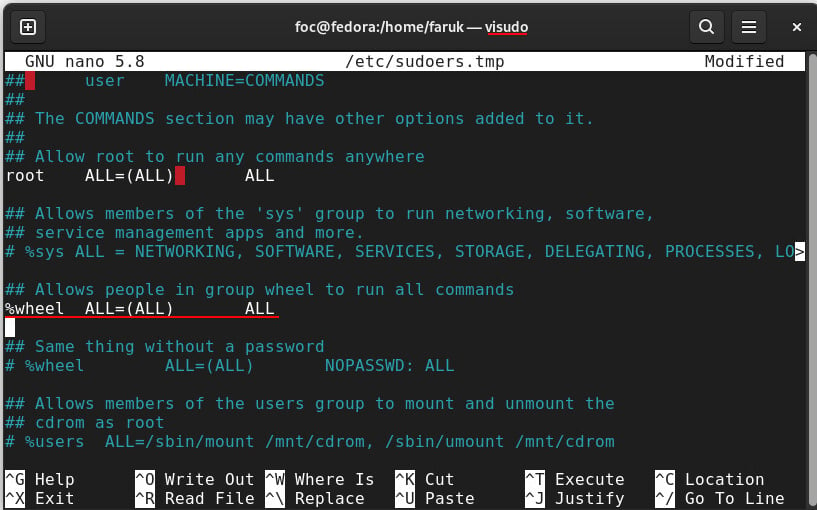 Wheel group users get root privileges temporarily. This authorization includes changing the root password. To prevent this, the sudoers file should be written like this:

After this operation, the user cannot change the root password even if user is in the wheel group:

There are 2 methods to add/remove users to the wheel group. One is to use a command for this job, and the other is to manually edit the /etc/group file.

Edit the /etc/groups file with a text editor (vim, nano etc) in the terminal: 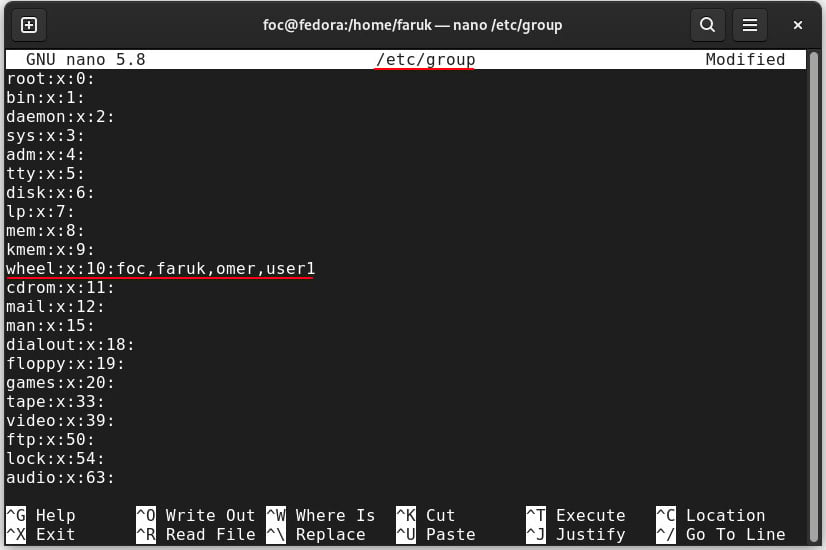 Type users in the wheel group line, one after the other, with a comma(",") between them.

Then, type sudo at the beginning of the commands you will type in the terminal to perform authorized action with the user. After the user enters his password, the action will take place:

The added user is in the wheel group:

If the user is already added and you just want to put them in the wheel group, use the usermod command:

The user is also included in the wheel group like this:

To remove the user from the wheel group, use the gpasswd command:

This way user user1 is removed from wheel group:

What you should do NEXT?

As we mentioned above, wheel group users are the most authorized users after root user. Care should be taken when adding/removing a user from this group.
Before adding/removing the wheel group, it should be ensured that the root password is known or you should switch to root user by logging in with an authorized user in a different terminal. Otherwise, you may lose all your privileges in that system.

In our article, we gave information about wheel, which is the super user authorization group in Linux.

linux.die.net - sudoers(5) - Linux man page
unix.stackexchange.com - How do I add a user to a group