The pam_faillock module performs a function similar to pam_tally and pam_tally2 but with more options and flexibility. The pam_faillock module supports temporary locking of user accounts in the event of multiple failed authentication attempts. This new module improves functionality over the existing pam_tally2 module, as it also allows temporary locking when the authentication attempts are done over a screensaver.

We will use pam_faillock to lock user account after certain number of defined failed login attempts. Then we will use faillock binary command to unlock the user by resetting the failed login counter.

For example, here is a sample output from /etc/pam.d/crond

The records in a PAM configuration file have a specific syntax. That syntax is as follows:

The second column refers to the CONTROL-FLAG. Here are lists of various control flags and their responses or actions:

ALSO READ: How to prevent user from using old password (or re-using) again in Linux

A designated PAM-MODULE is called in the order it is listed within the PAM configuration file. This is called the module stack. Each PAM-MODULE returns a status code, which is handled via the record’s CONTROL-FLAG setting.

Before you go ahead and start using this module in /etc/pam.d and lock yourself out, it is important to make sure this module is loaded by PAM. Check the content of pam rpm:

So the PAM rpm contains the pam_faillock.so module and faillock binary command.

We must make the changes to following two configuration files to lock any type of user account after X number of failed login attempts:

The syntax to be used with pam_faillock.so module:

Here from the man page of pam_faillock,

This method is not recommended. We know that the configuration change must be done inside /etc/pam.d/system-auth and /etc/pam.d/password-auth. Following configuration syntax is required to lock a user after 3 failed login attempts.

Following is a sample content of /etc/pam.d/system-auth (output trimmed): 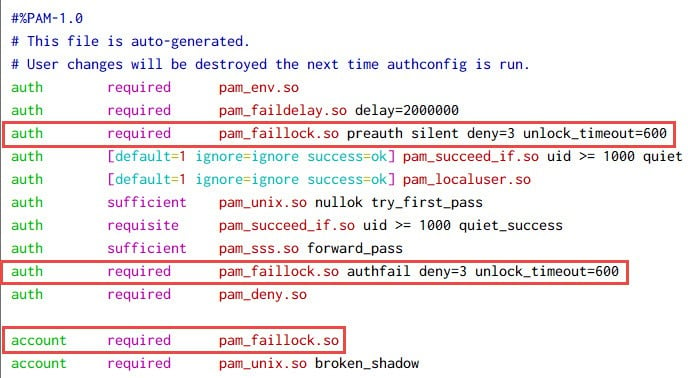 Following is a sample content of /etc/pam.d/password-auth (output trimmed): 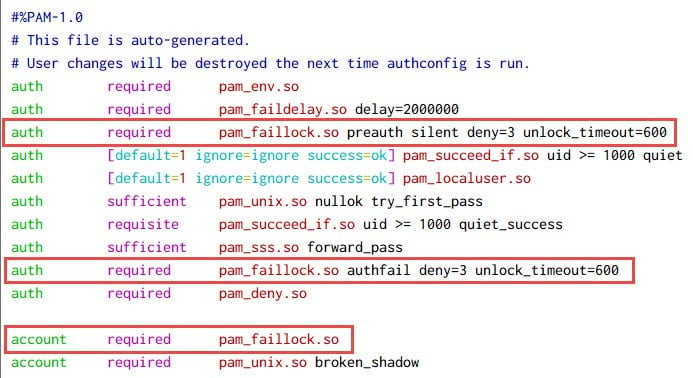 The sequence of the lines in the files (/etc/pam.d/system-auth and /etc/pam.d/password-auth) are important and any change in sequence may result in the locking all user accounts including root user when you are using even_deny_root option.

To enable faillock and lock user account after 3 failed passwords (executed on CentOS 7):

Verify if faillock is enabled properly:

You can also see that the configuration has been automatically added into /etc/pam.d/system-auth and /etc/pam.d/password-auth

So you don't have to worry about the line numbers, authconfig will take care of the order in which these lines must be inserted,

ALSO READ: How to check last password change date of user in Linux/Unix

To disable faillock you can simply execute:

authselect is the replacement of authconfig in RHEL/CentOS 8. You can enable faillock module by simply executing:

To disable this feature, simply execute:

Now that we have configured account lock out after 3 failed password attempts, let's verify the same for user1:

ALSO READ: How to exclude some accounts from being locked after multiple incorrect password

To unlock the user immediately, you just need to reset the failed login counters:

This pam_faillock module maintains a list of failed authentication attempts per user during a specified interval and locks the account in case there were more than deny consecutive failed authentications. The setup of pam_faillock in the PAM stack is different from the pam_tally2 module setup. Normally, failed attempts to authenticate root will not cause the root account to become blocked, to prevent denial-of-service. It is not recommended to modify the pam.d configuration files manually,the /etc/security/faillock.conf should be used instead.