In this tutorial we will cover these questions. In my previous article we learned about concatenating string which partially covered similar topic of incrementing a variable. Now let's learn about adding values and incrementing variables in shell scripts when working with loop.

Increment variable with for loop

In this section we will execute a for loop which will iterate based on variable value. The value of this variable will be incremented up to a defined threshold. 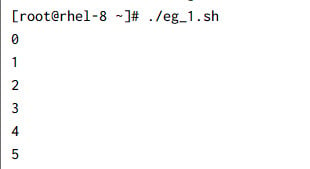 In this example also we will use for loop but now we don't have a list of numbers to iterate over, instead I have a list of hosts. I want to perform some action with individual hosts but I also don't want to loop run longer than 3 seconds so I will introduce a timeout.

So here our timeout variable will be incremented with every loop, and once the timeout value is equal to 3 then the loop will break:

Here we are incrementing our variable by adding 1 at then end of each loop using timeout=$((timeout+1)), we could have also used ((timeout++)) which will also increment the timeout variable by one.

But I prefer the first one because I have more control there, if I have a requirement to increment the variable by any other value such as 5 then we can just update the code to timeout=$((timeout+5))

Alternatively we can also use ((timeout=timeout+1)) which can also give us an option to add a custom value for increment. So now the timeout variable will be incremented by 5 in every loop.

Increment variable by plus 1 with while loop

Let us now take some examples with while loop. You may have a situation to update a file's content at some respective line so we can read a file line by line using while loop. In the same script we can add a variable which will count the line number and based on this line number variable we can perform inline operation.

For example, I want to add "ipv6_disable=1" in the line with GRUB_CMDLINE_LINUX variable on /etc/sysconfig/grub file. Now this entry has to be appended as a last entry of this line.

Below is my sample script with all the comments to help you understand the script: 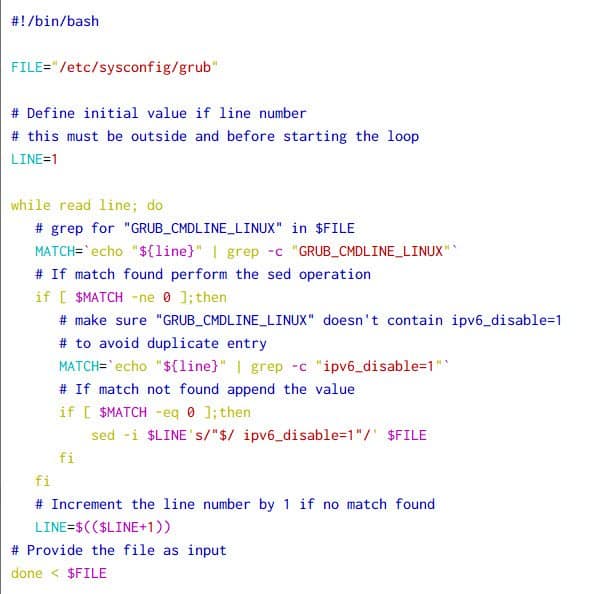 So we have used the code to increment our line number as used with for loop earlier LINE=$((LINE+1)). This is the only part which does the magic. You always have to remember two things when using such variable for incrementing

So the script is working as expected, it checks for duplicate entries and appends ipv6_disable=1 to disable IPv6 by using LINE to get the line number.

Check for success and failed scenario by incrementing counter

Now in all the above example we utilised incremental variable to perform certain task by adding 1 to the variable. Now we will increment counter just to determine the status of command execution and later use that to conclude our execution.

In this script we check for connectivity of target host. To validate the same I have added a "failed" variable and if the ping test fails then I increment the counter value. Once the ping test is complete then I will check if "failed" variable's value is more than what we have initialized i.e. 0 and then accordingly we inform the user. 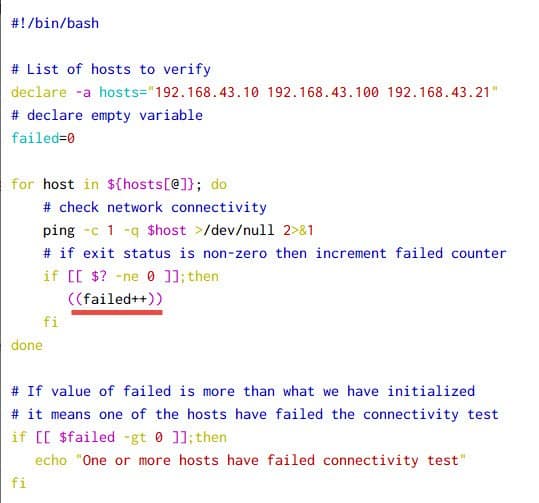 Now if your requirement is also to have the list of failed hosts then you can use += operator to concatenate strings in a variable.

Here there is a consolidated list of methods which you can choose based on your shell and environment to increment a variable. In the above script where I have used ((failed++)) or LINE=$(($LINE+1)), just replace this with any of the methods from the below table.

In this tutorial we learned about different incremental operators available in bash shell programming. You have to take care of certain things which I have highlighted multiple places in this article, such as position of the incremental variable, declare the var as integer, exiting the loop properly etc.

Lastly I hope the steps from the article was helpful. So, let me know your suggestions and feedback using the comment section.