Getting started with Terraform - Tutorial

Getting started with Terraform - Overview

We are going to start a journey of creating infrastructure in AWS with Terraform where we would begin by installing Terraform and then move towards Terraform best practices.

I have already created an AWS EC2 instance with Ubuntu20.04 which I will use to setup terraform.  Later we will use the same setup to create an infrastructure in AWS using terraform. Our instance is created with 8 GB Storage, 2 vCPU and 1 GB RAM. Although in production environment it is recommended to use higher resources based on the requirement but since we are trying to fit into the AWS Free-tier, so we have chosen t3.micro instance.

You may choose to create a new or use any of your existing AWS EC2 instance or alternatively you can also bring up you own Ubuntu or any other Linux distribution on a VM which you can use to further create your infrastructure on AWS. In such case install and configure AWS CLI on your Linux server to be able to connect to your AWS Server.

Now that we have all the pre-requisites explained, let's start the tutorial by installing Terraform. First of all you can update your Linux environment to the latest available packages. This step is not mandatory but recommended.

By default terraform packages are not included in the Ubuntu repository. So we need to download and create apt repository which will be used to install Terraform.

To verify the installation, run the command:

Now that we have installed terraform, let’s start creating simplest of architecture to get started with on AWS to see exactly how Terraform works.

ALSO READ: How to use Kubernetes init containers with examples

To get started with, we will begin with deploying a single EC2 instance. We will provide instance size and AMI id only and keep everything else default. The goal is to keep everything simple, so that focus is not on the configuration, but how Terraform actually works.

The terraform files within an infrastructure should always be maintained inside a directory. Terraform files have extensions of .tf. So while we run terraform, it will look for all the files inside the directory.

We will create a new directory where we will store the files required to deploy our EC2 instance using terraform:

To create resources with Terraform, the least requirement is to specify the resource and cloud provider. We will provide this information in main.tf file.

Following is the content of our main.tf. Find the appropriate AMI according to the region you are choosing and information about types of instances. You can check AWS regions and Availability zones to get your region name.

Here we are creating a single EC2 instance using the AMI image we have provided and add a Tag to this instance. We have not provided any other details such as network, disk, key etc. All the other required specs required to create an EC2 instance will be created at this stage with default values.

This is an optional step and is applicable to users who have just started to practice terraform on a newly created AWS account. In such case you won't have a VPC so you can execute below command to create a default VPC: 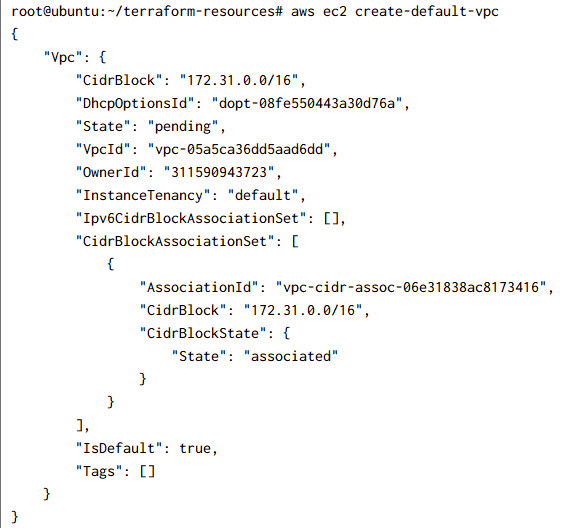 For Terraform to understand the configuration, it must be first initialized inside the directory that contains our code. Once terraform is initialized it can look into our configuration and create plan to build our resources accordingly.

terraform init initializes terraform state inside the directory according to the provider, AWS in this case. 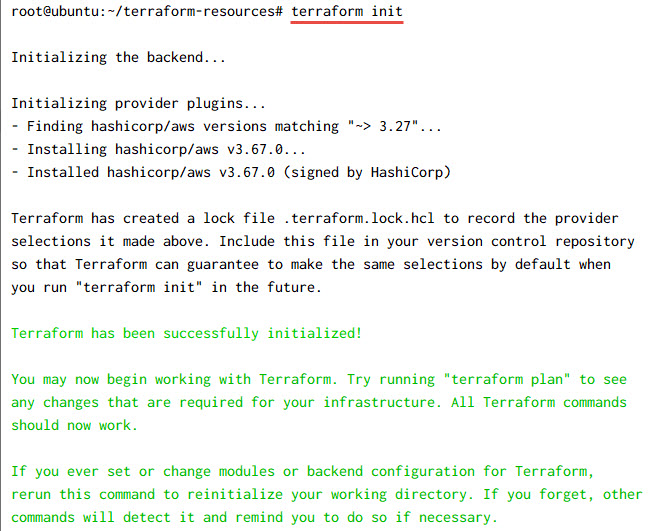 terraform plan does a dry run with the provided instructions and shows the overview of the resources that are going to be built with the provided configuration. If there are errors while in the code somewhere, it shows errors and doesn’t complete the plan.

Here as you can see, most of the options are shown as "known after apply" as we have not defined them in our main.tf config file, so these will be created automatically by terraform.

If the output of the dry run is what we need, we can now go ahead and build our resources using terraform apply. Here we will get similar output as we got with terraform plan command:

If everything is good then your AWS EC2 instance should be successfully created on the AWS. If you log into the AWS console, you should be able to see the EC2 instance we just created.

At the end of the command execution, you can check the content of your terraform-resources directory:

Here, you should be able to see a new file being created, named terraform.tfstate. This file is the terraform state file, which is in the json format that contains the information about all the resources that terraform created.

ALSO READ: How to Install TripleO Undercloud (Openstack) on RHEL 7

So now let’s add another block for a second instance as a backend instance of our application in the same main.tf file and see how terraform state works. We will append following content to our existing main.tf file:

Next you can go ahead and run terraform apply to create the resource.

State files allow terraform to complete the deployment of resources if the build process fails for one or more reasons. Terraform can look into the state file and can resume the deployment from where it was interrupted.

Verify the second EC2 instance on your AWS console:

So we have successfully deployed AWS Infrastructure using Terraform.

Use terraform destroy to delete resources

Now we have understood how the state files work in terraform, we can now go ahead to understand how “destroying” terraform works. When “terraform destroy” is hit, terraform looks into its state file and destroys all the resources that exist in the terraform state file.

To destroy resources, hit terraform destroy and confirm with ‘yes’. The instance has been deleted.

Push the code to the Github repository

As discussed earlier as well, one of the most fascinating features of IaC is that it can be treated as code. So, let’s put that into practice and create a remote repository to store our code. We are using Github but any other remote repository is just as fine.

If you are not familiar with GitHub or Git, you can follow our end to end tutorial on GIT to learn more about the commands which we have used.

Before pushing our changes to Github, let’s create a README.md file with details about our code and how to run the code.

Let’s create a repository on github and initialize in our directory.

There you go ! You built your first infrastructure on AWS using terraform.

In this section, we started by installing Terraform on an Ubuntu machine and ran a sample code that creates a instance. On the same configuration, we added block for one more instance to see how the state file works. We saw how terraform init, terraform plan and terraform apply works. On the next part of this series, we will see how to use best practices with Terraform. See you there !