In this tutorial, we will learn about Git workflow in detail. We will cover different levels that make up a Git system. These levels represent the stages that content moves through, as it makes it way from the local development directory to the server-side (remote) repository. One way to think about and understand these levels is to compare them to another well-known model, a dev-test-prod environment.

The following diagram represents dev-test-prod environment. Most organizations follow similar version of this model in their software development and release processes:

To give you a better understanding of this environment, I'll briefly describe the purpose of each of the levels in my reference model.

ALSO READ: Git delete branch - Are you doing it correctly?

We have combined different git workflow areas into Local and Remote Environment in the following diagram: 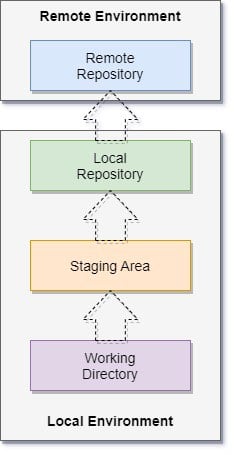 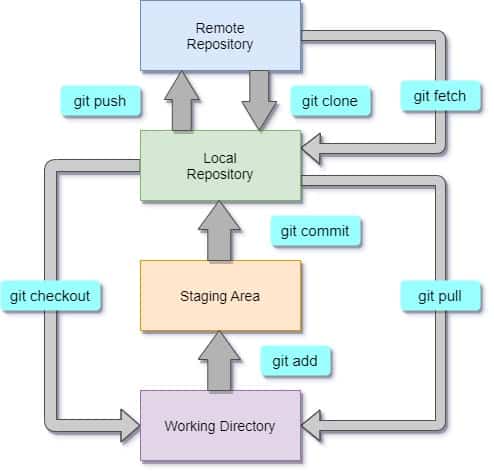 Let us explore the different git workflows in this image:

The add command stages content from the working directory to the staging area. Contrary to what the name implies, you always use the git add command to stage anything, even content that is not new and that has been staged before.

The git checkout command is used to retrieve content (as flat files) from the local repository into the working directory. This is usually done by supplying a branch name and telling Git to get the latest copy of content from that branch. Checkout also tells Git to switch the branch that you are currently working with.

The following table summarizes the different git levels and commands involved in the workflow:

In a Git repository, files pass through some different states:

In this tutorial, we learned about the Git workflow model, a way of thinking about the different levels of Git and how content is moved between them. These levels include the remote repository, the local repository, the staging area, and the working directory. The last three levels make up what I refer to as your local environment, where you develop content and do source management locally before making it more widely available by pushing to the remote.

We also learned about the basic file status lifecycle in git. There are the three basic operations of track, stage, and commit. We also explored the Git workflow of initialization, tracking, committing and pushing a repository.

Git Branching - Branching Workflows
What is a Git workflow?