You should understand the git commit message to keep track of changes and the reasons for the changes. A comprehensive commit message history confirms that you know what you are doing in a collaborative environment.

Worry no more if you seek answers to the three questions because you will find answers in this tutorial.

The structure of the commit message changes depending on what you intend to accomplish with the git commit message. For instance, you could be releasing software. You then want to speed up change tracking by breaking the tasks into smaller, understandable commit messages.

This format should be great for a commit message for a simple personal project:

Where the -m option sets the commit message. You can also use other options, such as --amend to rewrite the commit message or --all to commit all files irrespective of whether they get deleted automatically, tracked, or modified.

In a collaborative platform use the conventional format

The role of git commit message in git workflow

Git commit message is crucial in the git workflow as it determines the cleanliness of the history. Here is how it relates to the workflow.

notifies git to create a repository in your current directory. It does that by creating a subdirectory called .git.  that stores all information about the repository.

After instantiating a repo, you can create files in the working directory. You then move the file changes to the second stage of the workflow, the index, also called the staging area. Finally, you can unstage the files or permanently record the changes in the git database. Moving the changes from the index to the database is called git committing.

Since the primary reason for creating a commit history is to mark specific change stages, it is crucial to save the commits with a reference. The reference (git commit message) helps you or another person viewing your changes later to figure out why you made the change.

That begs the question, "Will your commits make sense later if you write multiple commits without minding an easy-to-understand format?" Definitely, no.

To avoid creating a mess of commit history, you should care about who will review the changes. After identifying the target repo user, you can follow the recommended conventions, as you will learn in this tutorial, to write remarkable git commit messages.

Enough with rules. Let's do some practice.

We will configure the default editor before creating and practicing git commit message using two repos.

The first (local) repo helps us explore writing git commit messages on a simple personal project. The second (remote) repo, on the other hand, illustrates the recommended ways to write commit messages when collaborating on the remote repo.

We need a text editor to write a complex git commit message. You can change git's default text editor, Vim, to a more manageable one by entering the editor's name in the following command:

Since I will use Visual Studio Code, I am setting it as follows:

The -w flag informs the terminal to wait until we close the editor before updating the commit message. Otherwise, on running the commit command

we will get a report on the terminal like Aborting commit due to empty commit message after entering the commit message then closing Visual Studio Code.

Let us create the two repos to practice the git commit message, starting with the local one. Head over to the command line, create and initialize a repo as follows:

Move to GitHub and create the remote. I am creating a repo, shared_commit, and cloning it using these steps.

Now that we have a setup to practice the git commit message, let's dive into some relatable examples.

When managing a simple personal repo, you must not be so hard on yourself. You can write a basic commit message as follows:

cd into the personal_commits repo.

and commit it using a git commit message as follows:

We can check the saved commit message by logging the history. 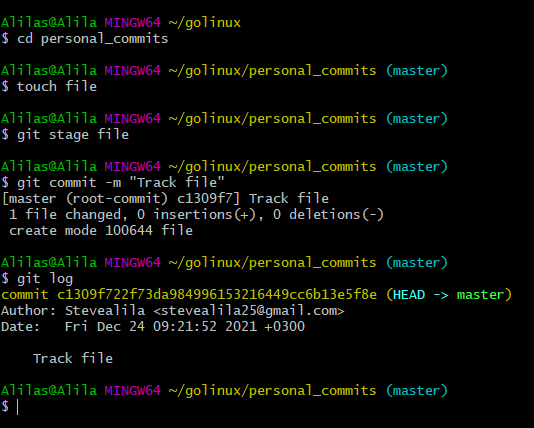 The most standard route to collaborate on a project is through branching, merging and pulling changes. You can create a tidy repo by squashing git commit messages. Better yet, you should use a descriptive commit message after doing the merge to create a more straightforward repo.

The conventional commits enable you to

The general structure of a conventional git commit message is

The main commit types are fix for fixing bugs and feat for code features.

Other commit types are build, test, refactor, docs, chore, style or ci. It would be best to follow the Angular convention when using them.

The one-word noun scope provides additional information. The description should be written in an imperative verb.

Here is an example of a git commit message.

feat is the commit type, api is the scope while the description is send a push notification when the app closes.

The body explains the description and must not follow a specific order like the type, scope, and description. Below is an example.

The most familiar footer type is the breaking change, capitalized as BREAKING CHANGE. You can accompany it with an exclamation mark ! on the commit type to denote an urgent need for attention.

Now that you understand conventional commits and rules for writing them, let's look at a typical way to apply them in a git commit message.

Using a conventional git commit message with a shared remote

Unlike a release project with a changelog, a simple shared remote repo may not have a body or footer. You will mainly specify the commit type and body as follows.

Give it a git commit message

To write a commit body and footer using the standards described above, run the

command without the commit message to open a default text editor we configured in the setup section.

then refresh the remote repo on GitHub.

Understanding git commit message operation is one of the most crucial skills for any software developer. The skills let you create a comprehensive commit history. You can easily collaborate with other developers, especially during issue tracking and feature releases.