When you push files to your remote repository like Github, the files you've pushed can be viewed by anyone. This can be stressful as some of the files may be containing confidential data that should not be shared publicly. This should not stress you now, Git has a way of protecting your files in a very easy and simple way.

Git observes every file in your project folder in three main ways:

The .gitignore is a file containing a list of files or folders that allows you to command Git to pass over/ignore in the local repository while pushing commits. The .gitignore file is mainly found in the main folder of a project. Git can not ignore files and folders on your local branch unless you intentionally remove them from the branch to your .gitignore file. This means that all files and folders in your local repository are added to commit in case you use the git add . . This git add . command stages every file into a commit.

Mostly, developers like to ignore output folders, compiled code, and concealed system files. For example, if you’ve got a .env file in your project folder, you may wish to hide it because the .env file contains API keys that you may not be willing to commit. In Git, there is no .gitignore command to be used to ignore files. For Git to ignore your files, you must intentionally create a list of all the files and folders you want to be ignored and add them to the .gitignore file.

To clearly master how .gitignore file works,  it is important to have hand-on experience on how to go about it. I will clone git_examples repository from gitlab to my local workstation which we will use to demonstrate the examples from this article:

Making a .gitignore file in your local repository is simple. On your terminal/command shell, cd to your project repository/directory and use touch command to create the hidden file.

You can use ls -al to list all the files including any hidden file. The file does not need any configuration setting for it to work.

Let's take a look at an example. In your project folder, we have untracked files and folders as seen below:

It's a bit pointless to track the .DS_Store and node_modules/ files in our repo. The DS_Store is a macOS invisible file that is automatically created when you open a folder with Finder. On the other hand, the node_module folder contains downloaded npm libraries that anyone can download on their machine, so we'll have to ignore them.

To ignore these files we will add DS_Store file and node_modules folder in .gitignore file which we created earlier.

Check the git status command, now the DS_Store file and node_modules folder are not in the untracked files and are stored in our .gitignore file

2. What type of files should be added in the .gitignore file

Git allows you to have a .gitignore file in any directory within your repository. Each file affects its directory and all subdirectories. To resolve a hierarchy with multiple .gitignore directories and to allow command-line addenda to the list of ignored files, Git honors the following precedence, from highest to lowest:

5. Examples of pattern matching in .gitignore

In this section we will cover some examples to ignore files and directories based on pattern match:

Blank lines are ignored, and lines starting with a hash mark (#) can be used for comments. However, the hash mark does not represent a comment if it follows other text on the line.

The forward slash symbol ( / ) is used as a folder separator. When used at the start of a pattern, it is relative to the folder where the .gitignore file resides.

If there is no slash at the start of a pattern, it matches files and folders in any folder or subfolder.

If the pattern has a slash at the end, it matches only folders. If a folder/ directory is ignored, all the subdirectories and files in that folder are also ignored.

There are three different regex pattern which can be used with .gitignore:

When you have two ** at the end of a pattern and a slash symbol, it equals anything inside the named folder.

5.4 Ignore a range of characters with square brackets []

The square brackets equal any of the characters that are inside the brackets. When two characters are separated by a - (hyphen), it shows a range of characters, and the range comprises all characters between the two characters. The range can either be alphabet or numeric.

If the first character in the pattern following the [ is an exclamation mark (!), the pattern matches some of the characters except the specified set.

Any pattern that begins with an exclamation mark (!) re-include any files that were previously ignored by the previous pattern. This rule aims to re-include files that the parent folder excluded.

You can not negate a file that is inside an ignored folder.

In this case, git will still ignore logs/example.log because the whole logs folder is ignored.

This table contains some more examples to demonstrate the behaviour of different pattern matching used in .gitignore file:

.git/info/exclude. These files remain unsorted and undistributed. This makes it a better place to add patterns that will only be of importance to you. They only work on that particular repository, and they do need to be committed.

Inside your Git folder there is a /info/exclude  that works the same way as .gitignore file.

Add files that only you want to ignore in your project

Now, the files above are only ignored in our local clone but if we want them to be universally ignored they should be placed in .gitignore file

Additionally, you can create global Git ignore patterns by setting Git core.excludesFile property for all repositories on your local branch. The file can be kept in your home directory for easy spotting. They affect every directory/repository you use on your computer, and they do not require committing. Once the file is ready, you have to configure its location with git config.

The files added should be used in storing files that are specific to your production environment only. For example, if you are a Windows user, you may want to have a thumb.db file and since other developers using the same repository may not be using Windows, the presence of a thumb.db file repository gitginore would not benefit them. Let us create a global Git ignore pattern.

Add files to your .gitignore file. 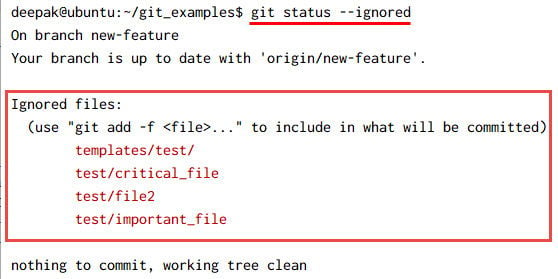 One of the frequently asked questions is, can files that have been ignored be committed? It is possible to commit  ignored files by the use of the force option (-f  or --force) while you git add 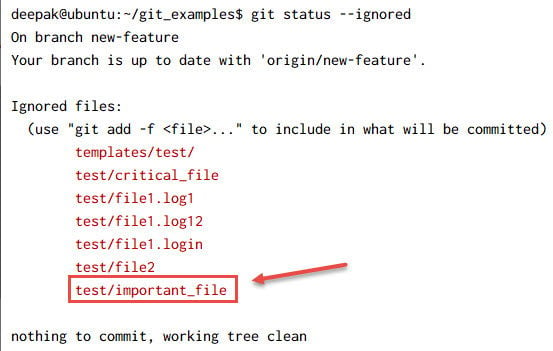 Next we use git add -f to add this file forcefully to our repository:

Next check the status again, as you can see our file has been added successfully: 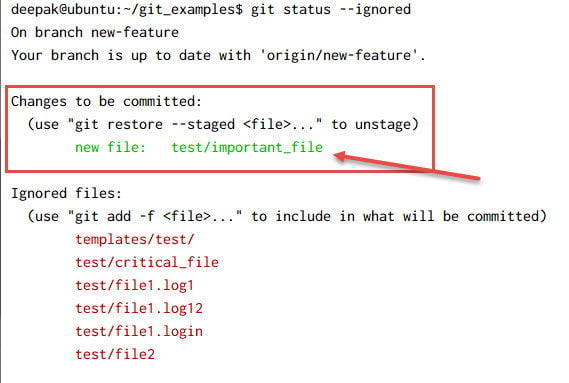 Now we can go ahead and commit this file:

The git stash command is a powerful feature that temporarily shelves changes that you have made on your working file so that you can focus on something else and then revisit and re-apply the changes later. Stashing is convenient if you urgently need to switch context and focus on something else, but you have not completed your task and can not be committed. By default, git stash ignore all ignored files and only stashes files that are tracked by Git. But, you can initiate a git stash -u ( untracked file) or with the --all option to stash changes ignored and untracked files.

Now we are going to git stash -u  to stash our untracked files.

All our files have been  stashed, now let us confirm by using git status to see the state of our repository

In some cases there can be a challenge determining the reason why some files are being ignored, this happens mostly when you have multiple .gitignore files or many complex patterns. This is where we use the git check-ignore command with an option -v to tell Git to showcase matching pattern's details.

For example, to check why is www/config.lock ignored. We would run,

The output  will show the path to the .gitignore file, the actual pattern, and the line number of the rule which matches the pattern.

12. Advantages of the .gitignore

Apart from ensuring that Git does not track particular files and directories, there are other advantages that come with using a .gitignore file.

In this tutorial we covered following topics: