git revert to previous commit is a safe way to undo code changes. The simplest way to start using it is to understand its significance in git workflow and syntax by going through various examples, as you will see in this article.

Git works by tracking changes made to the code. The centralized workflow enables developer collaborations and code documentation. You can add and commit Changes to local or remote git repositories, such as Github, Gitlab, and Bitbucket.

Besides git checkout, the two primary paths you can take to undo commits are git reset and git revert. Your choice of either method depends on your work environment (local or remote git repository) or the level of undoing permanency you seek.

git reset only undoes changes made locally. git revert, on the other hand, undoes changes both local and remote changes on the repo. That prevents a commit CONFLICT error that often results when you do --hard reset.

Unlike git reset, which focuses on the most recent code changes, git revert undoes changes in any commit. Instead of deleting changes from the history, it undoes the changes and makes a new commit by asking for a commit message.

The ability to ease file tracking and prevent CONFLICT issues makes git revert an essential tool for every developer to undo changes in the remote repo.

Assume we have 3 commits:

There are a couple of methods you can choose to revert to previous commit, I will try to cover them based on different scenarios:

If you want to create a new branch starting from a certain commit id then you can use:

If you want to revert to the previous commit and delete all commits in between, you can use git reset. But this is assuming that you have not pushed your changes to the remote repo.

You made some mistake in one of your commits, and you want to fix it with a new commit. So you can use git revert in such a scenario.

This will revert everything from the HEAD back to the commit hash, meaning it will recreate that commit state in the working tree as if every commit after <commit-id> had been walked back.

Before using git revert to previous commit, it is essential to have an environment to simulate the scenarios as we covered above. Here, we will build a history of three commits.

I am using GitHub to create a new repo, my-code, to demonstrate the steps to perform git revert to previous commit.

I will clone this newly created repo into my Windows laptop.

You can achieve a similar result by running.

We see two untracked (red) files, as shown in the following screenshot.

Let's git add . and git commit the changes with the message -m "add html and css".

Recheck git status, followed by git log --oneline. Here is what you see. 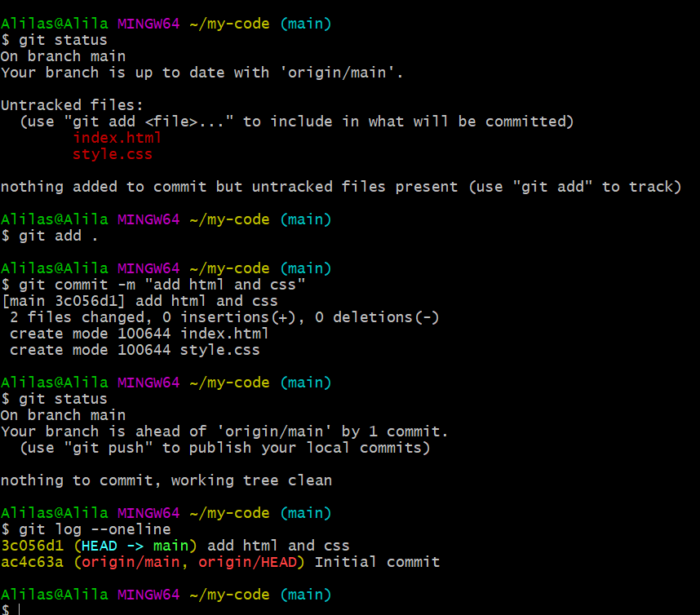 Add more code lines in the html file, such as:

Let's recheck the status of the repo.

We see that we have modified index.html but it is not tracked.

Let's add, commit and push the changes to the remote repo.

We should see the changes on the remote repo, as shown below:

git log --oneline shows we have three commits in the history.

The seven-digit numbers, 37585d7, 3c056d1, and ac4c63a, help track the commit history. We can use the ids to achieve git revert to previous commits.

They are short forms of the entire history. Enter git log on the terminal instead of git log to see the whole hash. 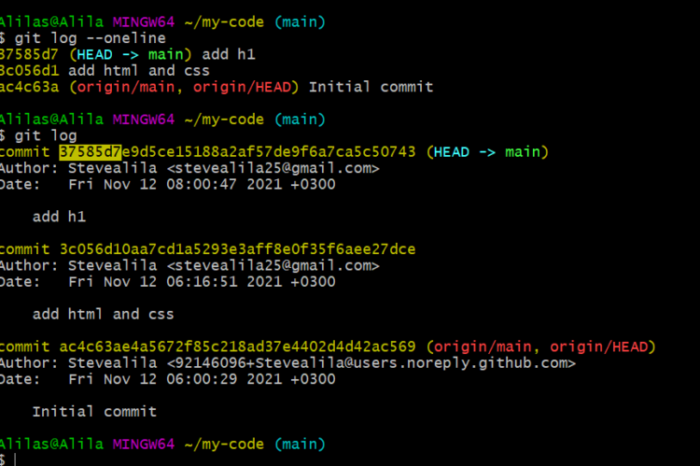 Now is the time to do some git revert to previous commit by running the three typical commands (checkout, reset and revert).

git checkout helps us discard changes in the working tree. For instance, we can dump all the latest changes made to index.html.

or discard all changes in the working area using a period (.), as follows:

Likewise, we can use the commit id

or create a new branch starting from a specific commit id then you can use:

Example-2: Use git reset to revert to previous commit

We want to revert to the previous commit and delete all commits from the history. We can use git reset depending on the stage of change.

ALSO READ: How to unstage files in git without loosing changes

After the reset, git status shows that the index.html file got modified.

git reset --hard HEAD~1 discards all the working tree and working area changes. You should use the command to revert changes not pushed to the remote repo. Otherwise, you will not recover the commits and get a CONFLICT error resulting from a code difference between remote and local repos.

This time around, we discarded one commit history, and the head is at the add html and css commit instead of add h1 commit.

Assume we want to undo the changes we made to the HTML file. According to the above history, our focus is on id 3c056d1. Enter git revert 3c056d1. Git prompts us to enter a commit message via the code editor.

We can go with the default commit message, Revert "add html and css ". Did you notice what happened? The contents of our HTML file got cleared, and a message like this remained on the terminal:

If you git log --oneline, you realize that git revert has not affected the history. Instead, it has undone the changes and made a new commit to accommodate the reverts.

HINT:
You could add --no-commit here to avoid creating a new commit while performing the revert operation.
ALSO READ: Move content from one git repo to another [5 simple steps]

Here is another git revert to previous commit example.

Assume we want to undo every change made after we cloned the repo.

And voila, we are back to the initial stage!

git revert to previous commit is one of the most crucial practices that every software developer should understand. It enables you to undo changes in code without affecting the commit history. The simplest way to start using it is to understand situations when it outperforms git reset then play with it from local and remote repositories.

How do I revert a Git repository to a previous commit?