Git pull is the process of fetching and merging committed changes from a remote project to your local server. To pull in git implies accepting data for your local workstation from your Github account. Git employs the use of git pull command to get a remote repository to a local working environment.

In this tutorial, we are going to explain how to work with git pull command, git pull methods and how to make a pull request.

How does a git pull command function?

A pull command activates the pull fetch command directed to the active local branch with the head pointing at it. When the local branch accepts the remote content, a new merge commit is established causing the head to shift and point to the newly created commit.

Following is the syntax to use git pull:

Below is a diagrammatic presentation of the git pull function. Generally, the pull command originates from the remote repo to establish a connection with the local repository.

Now that we have a local workstation ready, let’s move forward and practice using different methods of git pull.

In this section, we are going to demonstrate how to work with the git pull command using examples.

It is possible to successfully run a git pull command without an option or repository specification provided in the command. How is that possible?  We will use an example to illustrate how that works out as follows:

First, we will create a branch trial-1 on our local workstation:

Next, we will then push it upstream to create a remote copy of the same branch on the repository as follows;

We now have the trial-1 branch as a remote branch as shown in the output. Now any other user in the team who needs to work on the same branch can simply perform git pull (assuming they already have cloned the repo). We will add a file test-5.css and have the new changes downloaded into our local repository.

HINT:
Since we had checked out  (switched) to trial-1 branch earlier so without any arguments the git pull command will pull the changes of trial-1 branch to the local workstation.

The result displayed shows that the git pull command was a success. You can see the branch trial-1 with all the latest changes downloaded. The head as expected will be pointing to the last commit.  Let’s run the git log --online command to see that in action.

You can also raise a pull request using a project URL and specifying the branch name with following syntax:

Get your project URL by clicking on the code button in green as displayed below:

Now assuming this branch is also used by other developers, we want to pull the latest changes. So we can use following command:

So now we have pulled all the changes from git-demo branch of the git-trial repository.

Git force pull command downloads the remote content to the local server despite any conflicts in the procedure of fetching and merging.

Assume that you are working with another developer on a collaborated project. You make changes through your local repo and the other developer also runs some changes on the remote repository. During your time to fetch the repo, you encounter conflict as a result. We will use this scenario to demonstrate how git force pull command works.

In this example, Maureen and J-Mulombi are working as a team on the git-trial project. While working J-Mulombi added and committed a remote file 3.css as illustrated.

Without knowing the changes that her team member committed in the project, Maureen creates a file newfile.css in her local copy of git-demo branch but doesn’t commit it.

Next, Maureen decides to run the git pull command to update local repo before she can commit her changes but she encounters an error as illustrated:

At this stage, Maureen decides to use git force pull command to forcefully get the latest changes downloaded to the local remote without raising a conflict.

The first step is to run git fetch all:

By applying the git fetch –all command, you can download all the recent remote content without merging. Meaning you skip the merging step required by basic git pull command.

We now have the HEAD pointing to the latest commit and obviously in the git-demo branch. Lastly, you will run the git pull origin git-demo –-force to forcefully have all the remote changes updated to the local server as follows: 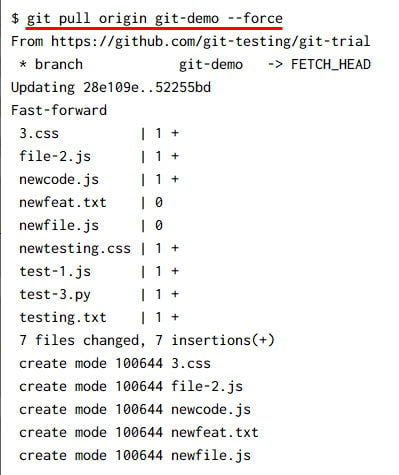 From the output, you can see all the files found in the remote repo and local branch git-demo displayed.

Method-4: Use a pull request

We earlier explained what a pull request is and its importance while collaborating with others on a project. In this section, we will demonstrate how to run a pull request.

For you to initiate a pull request, first you will need to create a branch and then create a file under create new file option in your Github account as shown by the screenshot;

Next, name your file e.g. file.txt, scroll down the page where you have two options on how to commit as shown below.

Choose the second option which permits you to start a pull request.

In a git environment, you have the flexibility to send a pull request at any stage of development whether in a commit or branch.

It’s during a pull request that you effectively communicate with your team member. You may communicate details about your changes, assign new contributors and perform @mentions team members. This depends on your role and how you have scheduled responsibilities with everyone else in the team.

The commits you make during a pull request are usually displayed chronologically under the file changed option in the pull request interface. That allows for the rest of the collaborators to give feedback through comments and they can also add commits at that stage of discussions.

Once you feel satisfied with the contributions for your pull request from the team, you can finally merge them in the pull request.

git pull <remote> <branch> command when performed, data history from the remote repository overwrites that of the local repository. Origin represents the location where the remote repository is stored. Master is the primary branch of a project both remote and local. Let's use an example to understand how git pull origin operates.

Using the git-trial project, we will perform a pull origin master command as follows:

Run git remote -v in case you want to see the location of your remote project as follows;

We have been able to cover the following topics in this tutorial about the git pull command: