Getting started with git rm command

Git rm is a command to delete unwanted files or folders. Despite its usefulness in cleaning a repository, it is one of the commands that often confuse users. For instance, is git rm similar to rm? In which situations should you use it? What are its alternatives?

If you seek answers to the above questions, you are in the right place. By the end of this tutorial, you will know how to maximize the full potential of the git rm command. First, here is an overview of what we will go through.

or recursively delete a folder

where -r stands for recursively.

Git rm's typical alternatives are the git reset, rm, and d options. Before learning how to apply the commands instead of git rm, let us determine their differences.

What you should know before applying git rm

The root of confusion between git rm and other commands is the failure to distinguish between a filesystem and a repository. Technically, a filesystem or repository implies the same thing. However, git's conventional naming system slightly contrasts the two terms.

An untracked file often has no relationship with a version control system. For instance, a file is untracked before initializing git.

Running git init tells the version control system to be ready to take snapshots of your files and folders. But git does not track the files until you stage the files.

When managing the files, whether in the untracked or tracked stage, you may make a mistake that requires removing the files.

Since various commands can come into play at this point, you could be stranded on the best option to pick. However, after going through the following comparisons, that should not be a concern.

The primary reason for git's existence is to have a safe, friendly system to restore your files if they disappear from the local computer. Having that mindset helps in distinguishing the rm command from git rm.

Although both rm and git rm discard files from the filesystem, git rm is a safer path to take. For instance, running

removes the file from the filesystem, and git does not remember anything about the file.

On the other hand, despite running git rm on file,

you can still trace the files because they are part of the repository. You can check the traces in a branch, tag, or reflog.

So, the rm is a Unix command for discarding files or folders, whereas git rm is a git command for deleting tracked changes.

Git rm removes tracked changes from the filesystem. On the other hand, the d option removes branches and tags.

where -d stands for delete.

The (mixed) reset command does a similar role at the index as git rm with the cached command. Here, both commands undo changes on a file. For example, running

Git reset can either be a mild or a destructive way to discard committed changes. Do a soft reset if you aim to remove changes from the history to index.

However, use a hard reset if you want to untrack a committed file then discard it from the repository and filesystem.

It would be best to avoid the reset command on files already pushed to a remote because its disruptive nature causes a conflict error during subsequent pushes.

Those are the basics to get started using git rm. Let us set up a lab and practice the above commands.

I am creating a repository on GitHub called git_rm.

I copy the repository's URL and clone it locally. Navigate into the cloned repository.

Create a file and folder with a file.

We have two files and a directory with a file. The index has a new untracked folder and a file, whereas the history has a commit. 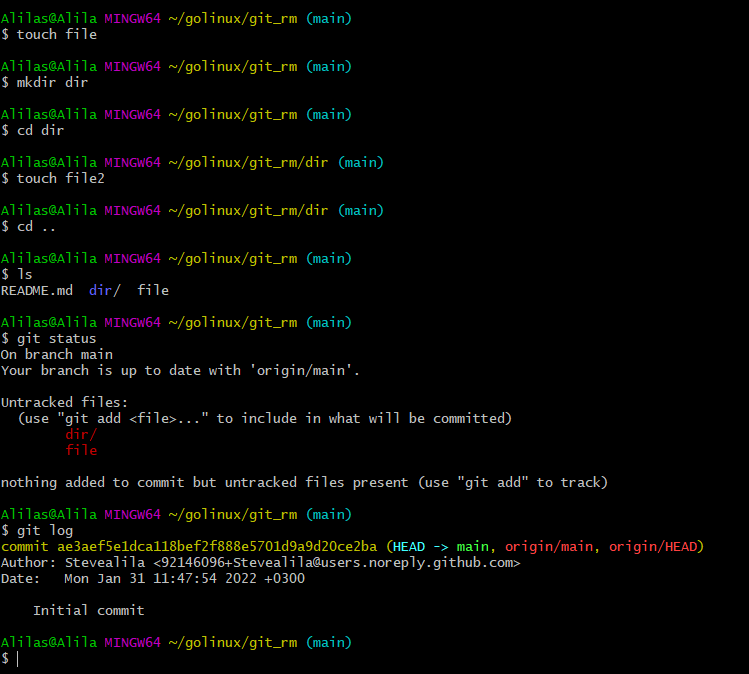 Example~1: Remove a file or folder from the filesystem

Let us track before removing the above file from the filesystem.

You can also remove it recursively by supplying the -r option.

However, git does not accept either method because we have not committed the new file. 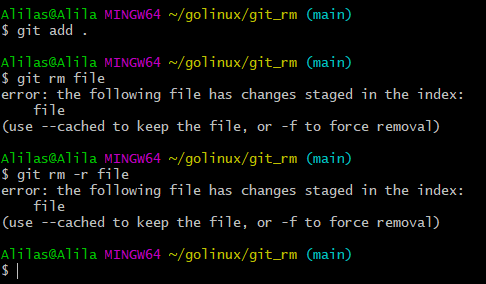 The recursive option combined with the -f option removes a folder with file(s).

Git rm removed the file from the filesystem, but git remembers the files. And can tell us that it just got deleted. 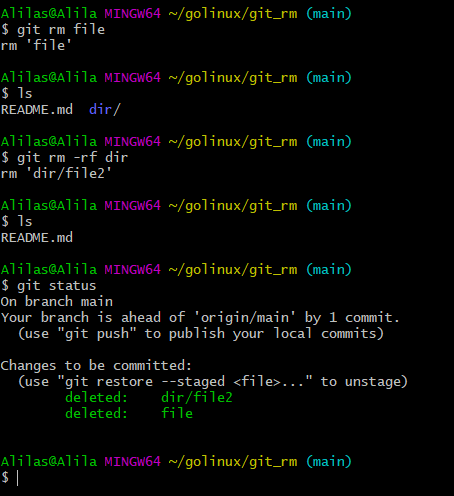 Example~2: Remove a file from the index

Let us create another folder with a file.

Then unstage it with the --cached option.

Git thinks the newly staged folder is meant to rename the last deleted because it remembers the deleted files and folders until you make another commit.

ALSO READ: How to PROPERLY list remote branches in git

Let us proceed and unstage the file.

And recheck the status.

Our file got untracked and is back to the working tree. 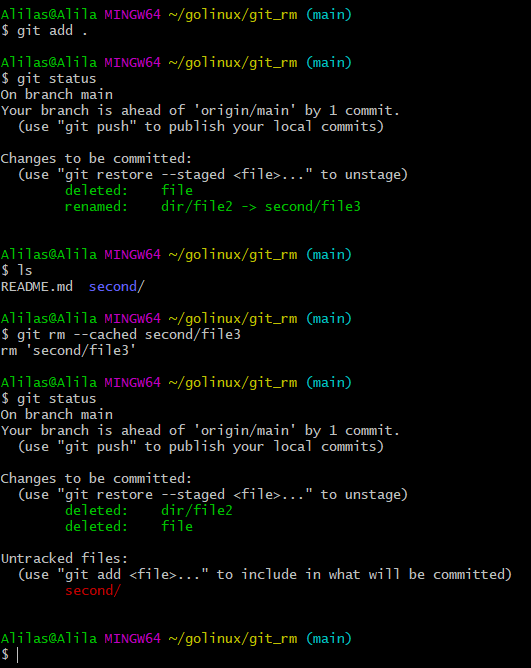 How to use git rm alternatives

The rm command discards a file from the working tree. However, this time around, we cannot trace the file.

we cannot trace the folder. 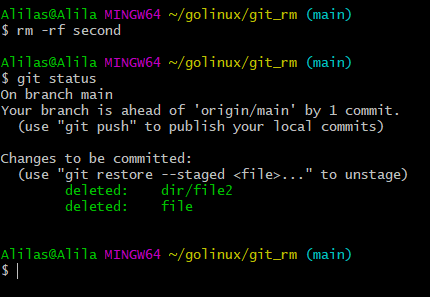 Let us commit the deleted changes before creating or staging a new file.

And check the files.

We have four commits and two files. 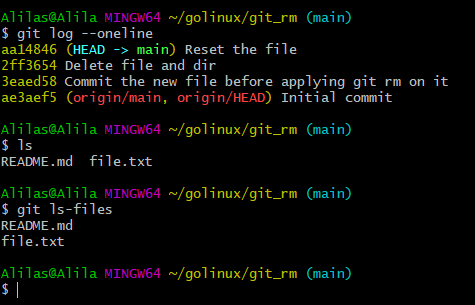 Let us do a hard reset on the last three commits.

Then recheck the history, status, and filesystem.

Our files are unavailable. 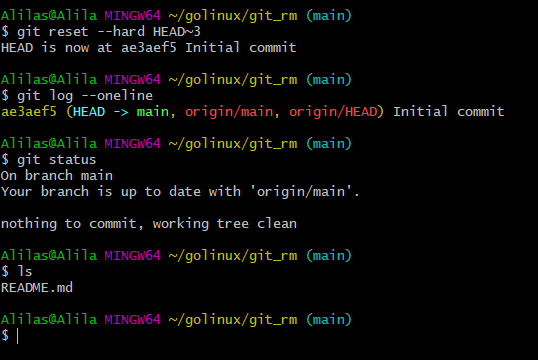 Instead of using a hard reset, we can use a mixed reset to undo changes, as we would using the git rm command. 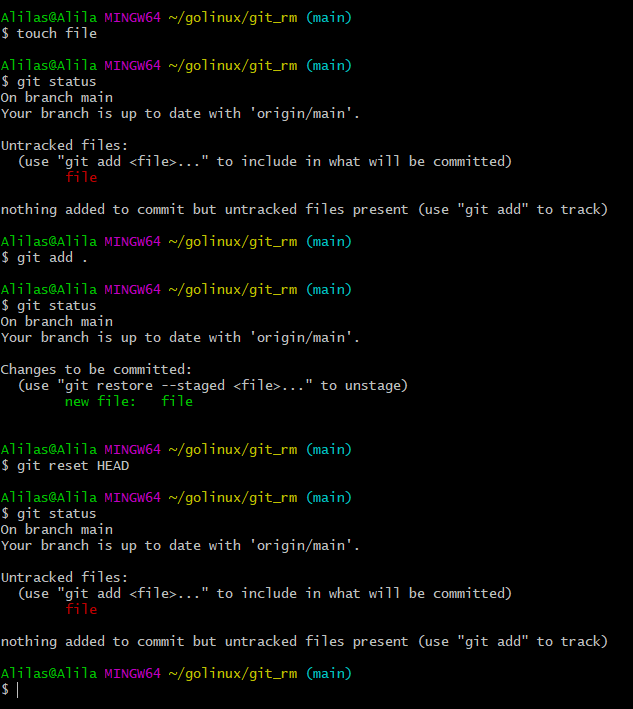 It is safe to use the reset on local changes. However, it would be best to avoid it when undoing changes on committed and pushed files. Instead, use the revert command.

Say we no longer need the latest commit and want to undo it. Let us revert it, recommit and push the changes.

Our default text editor prompts us for a new commit message. Let us accept the given message then close the editor. Next, push the changes and check the remote.

Git rm discards files and folders from a repository. It would help to prioritize it over the rm command or git reset hard when removing a file or folder from the filesystem. To achieve a similar effect at the index, use git rm with the cached option or its alternative: git reset mixed on the HEAD.