git HEAD~ vs HEAD^ vs HEAD@{} Explained with Examples

ALSO READ: How to safely migrate a Git repository [100% Working]

You may not be able to understand the comparison completely, so let's take multiple examples to understand and compare HEAD^ vs HEAD~ and HEAD@{}.

To demonstrate this example, I have created a new repository on gitlab and have done some dummy commits. First we will clone the repository:

As you can check below, I have three branches in this repo i.e. main, dev and prod. I have simultaneously done commits in all three branches.

Here is a graphical representation of the commit history on all the branches from our repository. 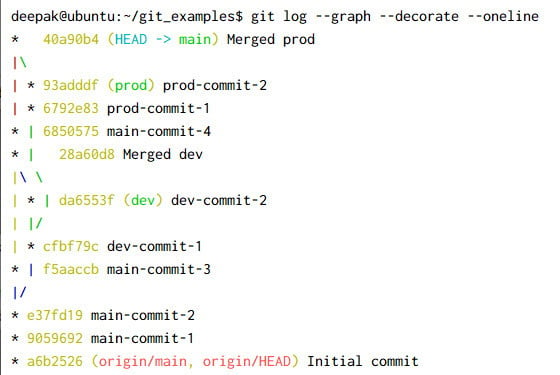 Since we will be dealing with parents when using tilde (~) or caret (^) sign, so we should also be familiar with the ways to check parent of any commit.

Based on our commit history, to list the available parents we can use:

Here, we used ^@ to get all parents and the --no-walk option to show only the parents and not their ancestors. So in our commit history we have two parent commit IDs i.e.:

We can use following command to get the parent ID of individual commits in Git:

To get the parent for 6850575 and f5aaccb commit ID respectively:

Now that we are familiar with the commands to get the parent of any commit, lets start using HEAD^, HEAD~ in our examples to explain the difference.

Compare HEAD^ vs HEAD~ vs HEAD@{n}

The special characters i.e. tilde(~), caret(^) and at-sign(@) are to be used with a particular commit ID to get respective details. We are using HEAD so you have to understand that position of HEAD can be different for individual branch.

Accordingly the commit history varies for each branch on the repository, so you should cautious about the branch which you want to use to get the required details.

In this section we will check the commit history from our main branch:

The following two commit IDs are where we have merged two branches into the main branch.

Now we can go ahead an query individual commit to get their parent details:

This will give you the last commit in the history which will be the parent for HEAD:

We can now add caret (^) sign to HEAD to get the parent of last commit i.e. from HEAD 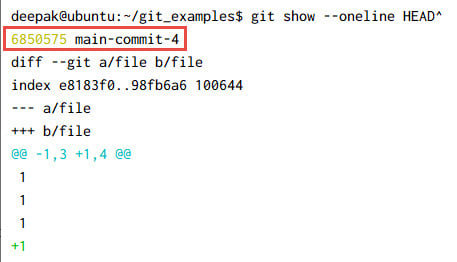 We can add ^^ or ^2 with HEAD or the last commit ID to get parent of our last parent i.e. 6850575 (so that should be technically grand parent I assume)

Here is a representation of all the commits in my repository using HEAD with tilde(~) sign:

Here is a representation of all the commits using both tilde(~) and caret(^) sign for HEAD^1:

Here is a representation of all the commits using both tilde(~) and caret(^) sign for HEAD^2:

Here is a representation of all the commits using at-sign(@{}): 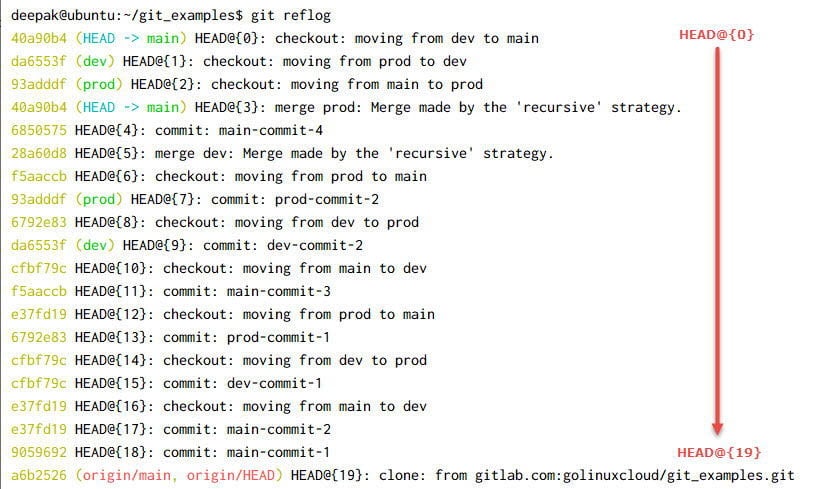 In this tutorial we learned the difference between the usage of tilde(~), caret(^) and at-sign(@{}) used in git. These suffix can be preferred in use cases where we don't have to deal with multiple parents in the commit history. You can always first locate the respective parent commit id and then use both tilde and caret sign together to refer individual commits part of the respective parent. Ideally if HEAD was a merge, then first parent is the branch into which we merged and second parent is the branch we merged.