Getting started for git squash commits

Doing git squash commits organizes your commit history. The commands to use during interactive rebase or git merge are:

to join commits, downwards, from the head or

to group the target branch's commits before merging the feature branch with the main one.

On the flip side, you should not use git squash git commits if you plan to recover the mini-commits. We shall do some practice in this tutorial to ease understanding of when and how to use git squash commits.

The need for git squash commits in git workflow

Before diving into the practical usage of git squash commits before git push, you should understand what lies in git merge vs rebase.

You could handle a git workflow with one main branch. You keep adding files to the staging area and committing them. Sometimes you undo specific undesired commits or recommit them.

Soon the project has massively grown that you invite other developers to join you, working on various mini-sections of the project. That is when branching comes in.

Your teammates open different branches and commit multiple changes in them. Depending on the merging model, the repo may appear disorganized such that tracking the logical order of commits becomes hectic.

Although git rebases may help create a linear repo, it can lead to more conflicts when many developers keep appending commits to the head of the main branch.

The best solution for either problem is to use git squash commits. The commits entering the main branch become comprehensive and manageable.

Let us create a local repo, and a remote one to practice git squash commits before and after push. We use the local repo for squashing with interactive rebase, whereas the remote repo helps with the merge squash.

I am creating local repo, squash_with_rebase

followed by a remote one on Github called git_squash_lesson. 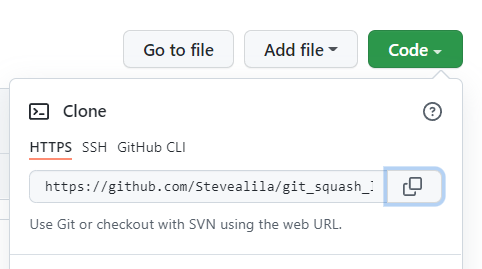 and move to the command line and clone the repo locally.

Now that we have two repos to practice git squash commits, let us build and modify them depending on our needs.

Navigate to the squash_with_rebase directory

and start building the commit history.

to instantiate a new repo in the directory.

We have one commit history in the master branch and a branch.

Assume we want to work on feature_A, test, and combine its commits with the main repo. Create the branch and check it out using either:

Build the commit history in feature_A.

Repeat the process with the auth.py file.

We shall repeat the process with the final commit in the feature_A branch. This time around, let us append a line in the dev.py file.

We have three commits in the feature_A branch, totalling the directory commits to four. 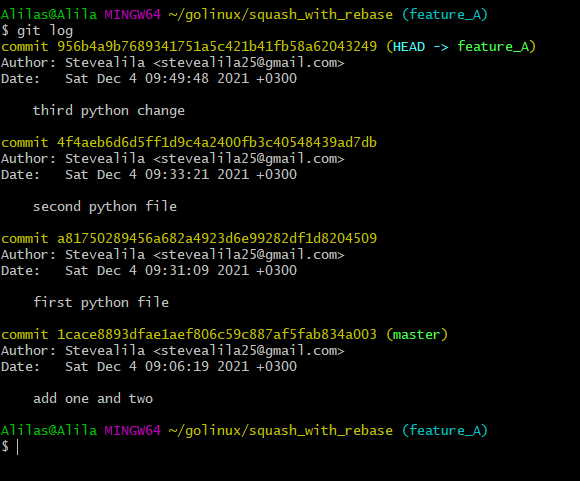 Check out the master branch and rebase the feature_A branch.

Master still has one commit in the history.

Let us rebase the branch. 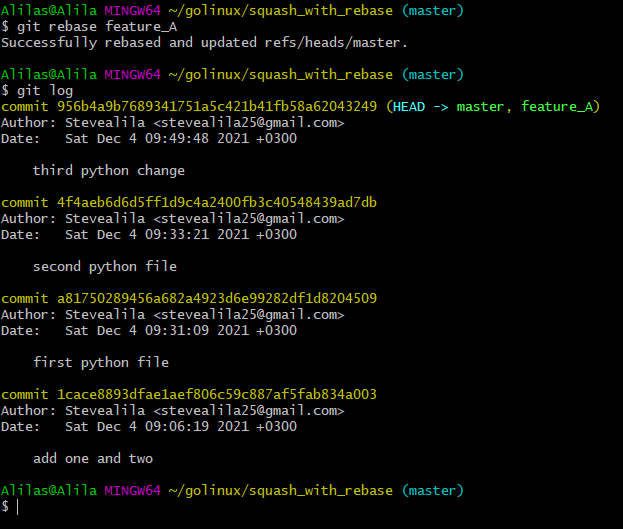 As we are about to push the changes we stop for a second and think, "Won't the history look nicer if we combined all the python commits into one?"

Sure, let us do that!

to act on the last three commits from the head.

Git opens our favourite editor, where we can handle git squash commits. Since my default editor is visual studio code, git opens it. 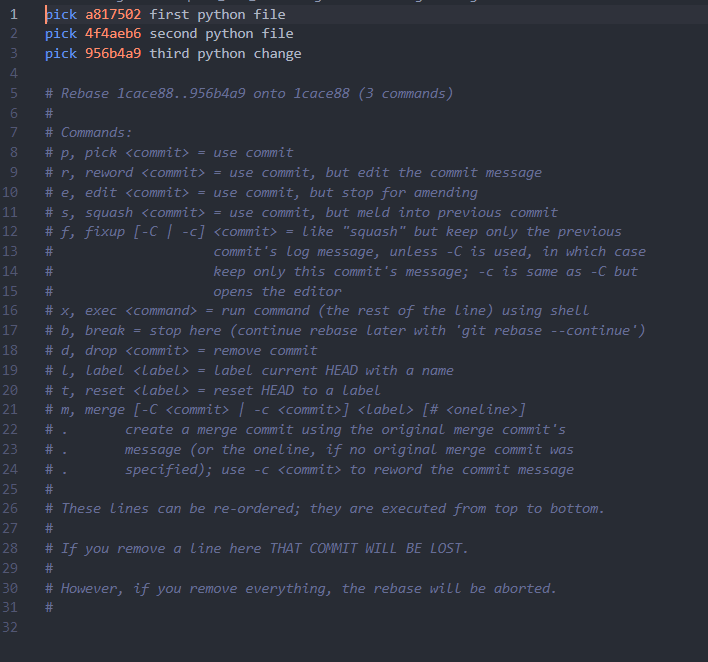 There are many rebase options, the default active one being pick.

Let us change the two pick options from the top to squash options before closing the text editor. 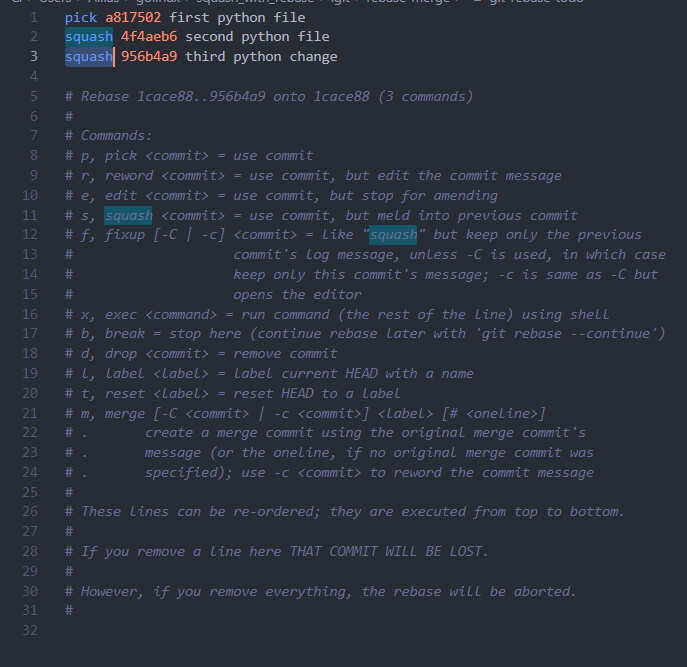 So, what do pick and squash mean in git? pick is an option asking git to show us the changes at every commit hash. By replacing pick with squash for 2/3 commits we are telling git, "Hey git, melt down the 2 squashed commits into the picked one."

Save the changes and close the editor.

The editor reopens, promoting us for a commit message. 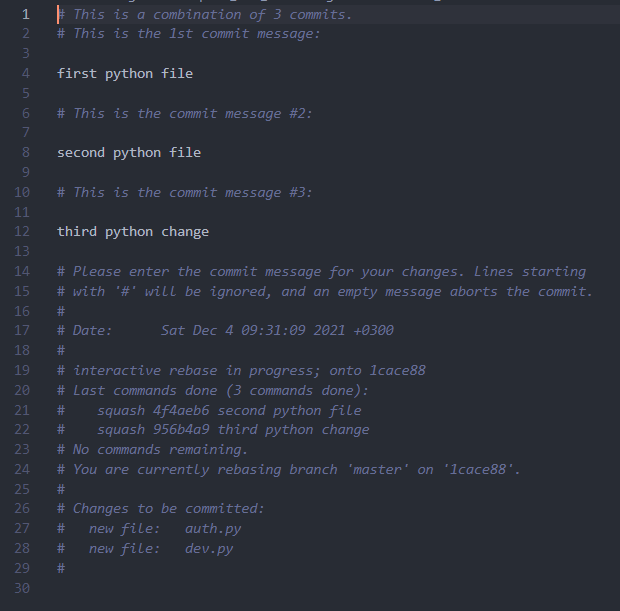 I am commenting out the two last commits and editing the commit message on line 4 from "first python file" to "add python files" then closing the text editor. 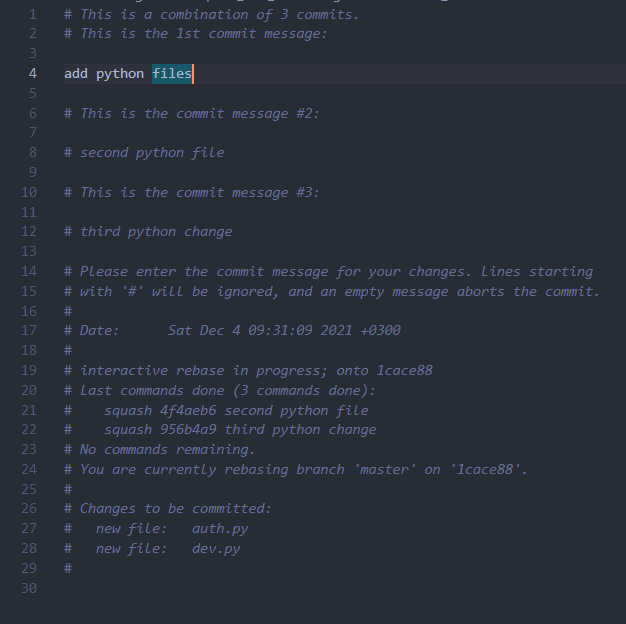 Our three python commits got squashed into one with a new commit message. 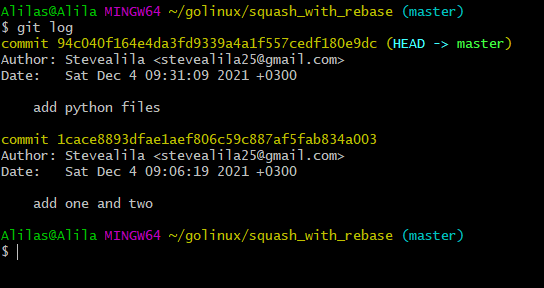 Let us see a similar scenario with a git merge.

You can apply git squash commits after pushing commits to a remote repo using the git merge squash command.

Build the disorganized commit history before tidying it up with git squash commits.

in the project directory if you did not create a README.md on Github otherwise Github initialized a repo, did the primary commit, git added, and git committed it for you.

Create more files in the folder.

We have two commits in the main branch

and one local branch.

Assume we want to work on a feature in branch_B, test, and merge its changes with the main branch's commits. Let us create the branch.

Let us build the commit history in branch_B.

Repeat the process twice with a different file.

shows we have added three js commits to the history. 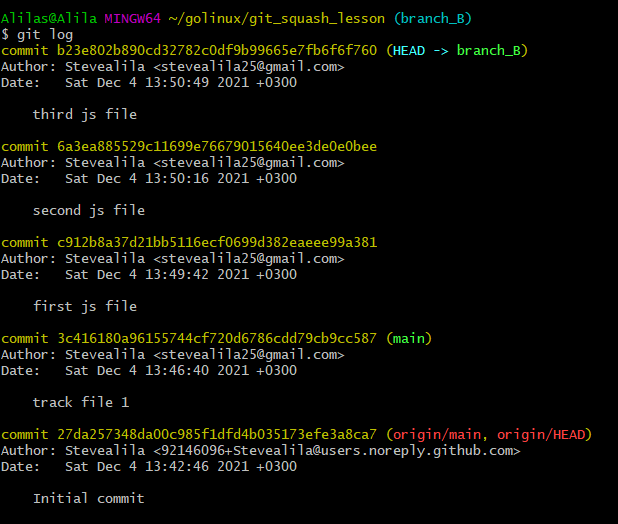 Let us push the commits throughbranch_B.

and refresh the remote, then check the commit history in branch_B. 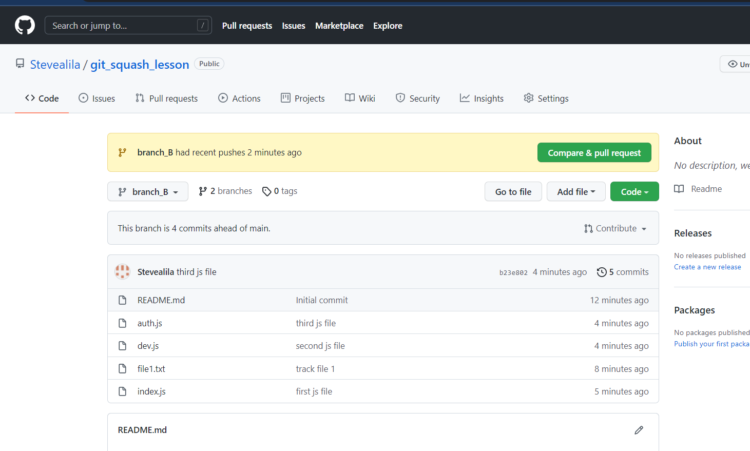 Click, Compare & pull request and follow the guidelines till all the changes get inserted into the main branch.

Return to the command and continue with git squash commits.

Checking the status shows we have staged files.

Let us commit and push them with the -f flag to discard the error message presented. 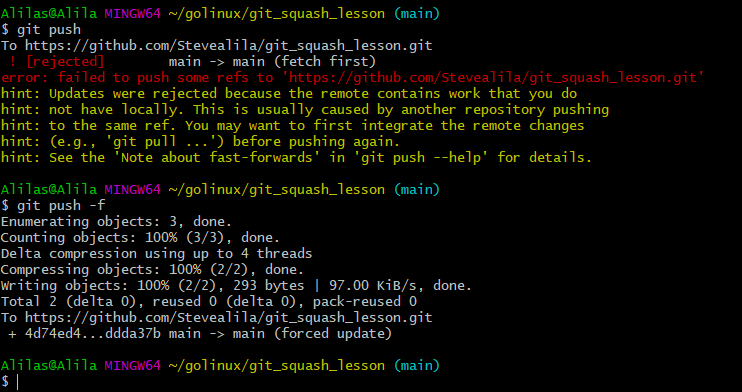 Return to the browser and refresh the remote repo's page.

All the .js files now have a similar commit message meaning our git squash commits were successful.

And that is how to git squash commits after push using the git merge --squash <branch> command. You can achieve a similar result by applying the interactive rebase command we learned in example-1.

You have just learned how to tidy up your commit history through git squash commits. Now is the time to simplify your file tracking by practicing the tricks you learned in this tutorial.